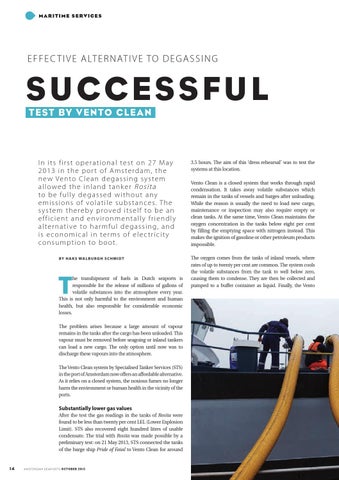 he transhipment of fuels in Dutch seaports is responsible for the release of millions of gallons of volatile substances into the atmosphere every year. This is not only harmful to the environment and human health, but also responsible for considerable economic losses. The problem arises because a large amount of vapour remains in the tanks after the cargo has been unloaded. This vapour must be removed before seagoing or inland tankers can load a new cargo. The only option until now was to discharge these vapours into the atmosphere. The Vento Clean system by Specialised Tanker Services (STS) in the port of Amsterdam now offers an affordable alternative. As it relies on a closed system, the noxious fumes no longer harm the environment or human health in the vicinity of the ports.

Substantially lower gas values After the test the gas readings in the tanks of Rosita were found to be less than twenty per cent LEL (Lower Explosion Limit). STS also recovered eight hundred litres of usable condensate. The trial with Rosita was made possible by a preliminary test: on 21 May 2013, STS connected the tanks of the barge ship Pride of Faial to Vento Clean for around

3.5 hours. The aim of this â&amp;#x20AC;&amp;#x2DC;dress rehearsalâ&amp;#x20AC;&amp;#x2122; was to test the systems at this location. Vento Clean is a closed system that works through rapid condensation. It takes away volatile substances which remain in the tanks of vessels and barges after unloading. While the reason is usually the need to load new cargo, maintenance or inspection may also require empty or clean tanks. At the same time, Vento Clean maintains the oxygen concentration in the tanks below eight per cent by filling the emptying space with nitrogen instead. This makes the ignition of gasoline or other petroleum products impossible. The oxygen comes from the tanks of inland vessels, where rates of up to twenty per cent are common. The system cools the volatile substances from the tank to well below zero, causing them to condense. They are then be collected and pumped to a buffer container as liquid. Finally, the Vento