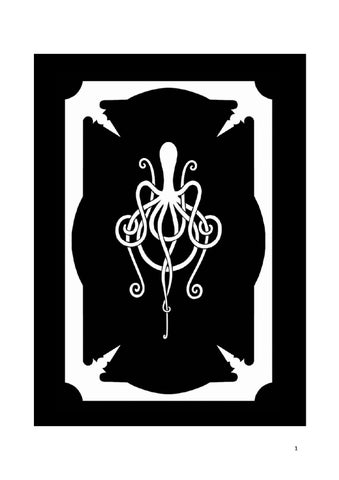 Let this gradient be called ≈. ≈ is akin to entropy. Each point of gradient ≈ within system ∞ is the point of a change. A change is a type of creation. All creations derive from entropy. The action of conversion between the intangible and tangible is the process of entropy. Existence is the name given to the cascading process of the reordering of ∞. The cascading order of entropy is a kind of hierarchy. The rate of conversion of the intangible into the tangible is dictated by the gradient ≈. Where there is ≈ there is created consequence. 11

All consequence assembles to form long chains of events. The number of events is infinite. There can exist infinite chains of events. Each exactly assembled chain is deemed NOW. NOW is the exact measurement of the rate of change of entropy. The rate of change of entropy is the same thing as the sum of all consequences. The sum of all human consequence or, human entropy, is called history. Think of history as a kind of consequential infinity. Each point of history might be deemed as either true or untrue. 12

All things are in a perpetual state of flux. A fluctuation is another term for a vibration. A fact is a type of vibration Consider the proposition &quot;X marks the spot&quot;. The position of X is meaningless unless prescribed by the boundary system. Facts exist only in a localized sense. A fact is a type of node. A truth is a special type of fact. A truth is actually a special type of lie. Where a truth is equivalent to an untruth, this is deemed a paradox. Since all facts are incomplete truths, all truths are equally untrue. 14

A kiss is a kind of bridge or a kind of node. Each interconnection of each idea creates a network. Networks form in to chains termed strands. Strands clump together to form webs. All webs act as a type of interface. Where webs exist - energy is stored. A web is a type of battery. Where webs connect, information passes. Information is kind of current. A thought is a kind of current. Consider a brain to be a type of complex web. Consider a nervous system to be a type of complex web. 16

≈ is the ctive dyn mic force of system ∞. ≈ is the conversion process from ideologic l to pr ctic l. ≈ is the conversion process from the possible to the ctu l. ll things re possible but not from every point within the system. Within e ch system, the limits of free choice re n logous to skier descending mount in. Choice is the gent of freewill. The unit of freewill is the qu nt of yes or no. Freewill is type of constructed l ngu ge. ny l ngu ge is n ttempt to del y the dec y of inform tion vi gr dient ≈. 22

Ch os is type of noise. Noise occurs where there is no p ttern to be found. Noise occurs where there is no ind to find p tterns. usic only exists within the ind of listener - it is type of controlled h llucin tion. br in is device to find c dences in noise. e ning is c sc de of c dences. e ning exists only through repetition. Repetition for s web. Culture is tuned web of desires. Desire is for of vibr tion. Culture tunes desire. Thought is ty e of vibr tion. 28

Where oney s ecul tively re resents future ct, its e ty e ning beco es unst ble. oney is not ty e of ti e tr vel. ll n es refer to oint cont ined within the set of t ngible things. The n e oney refers to oint beyond the re l of t ngible things - tow rds nothing. Nothing is the bsence of so ething. D rkness is the bsence of light. Nothing is ty e of r dox. oney is ty e of r dox. r dox is ty e of cr sh. cr sh is neg tive feedb ck syste . 30

The i ossible is distinct fro the i rob ble. It is ossible for s ller b g to cont in bigger b g. E ch thought is i rob ble lthough bsolutely cert in. Thought is kind of logic l r dox. Things re lw ys ore co lex then they see . co lex roble requires the si lest solution. n uncert in ind is uncert in of its uncert inty. Fro the egg issues entro y. E ch thought is n gent of entro y. The ide of entro y is lso in dec y. 32

&quot;If you w nt to know the v ue of oney - try borrowing so e&quot; - This st te ent is kind of ode . ode is n encoding of conce t. When the unit of encoding beco es e ning ess we h ve for of nonsense. When the unit of encoding is indeter in te then essenti y we h ve noise. t this oint usic beco es indistinguish b e fro noise. usic is kind of know edge inde endent of f cts. usic is essenti y vibr tion. usic is s ectr y v ri b e it is not rigid ike nu ber syste s. 34

Be uty in order is on y hu n construct. Order gives e ning to e ning. There is no ctu e ning to ife. S dness h s no ore e ning th n video g e. videog e is si u tion of conjectured sets of circu st nces. I c nnot y to b r ider on y ZX81. I c nnot think bout y own ind. y dog c nnot do the tics. I do not h ve dog. Uncert inty ies t the he rt of hu n cu ture. Uncert inty is the echo of revious error. 36

"Longtime the manxome foe he sought..."