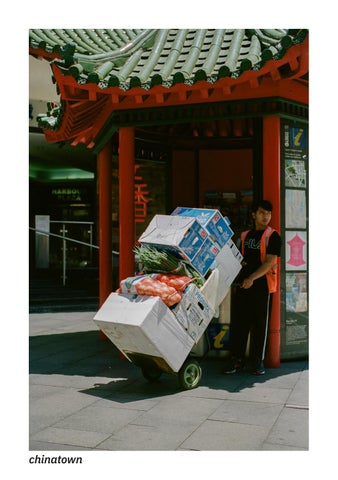 iâ&#x20AC;&#x2122;ve always been fascinated by cities. throughout my travels, both local and abroad, iâ&#x20AC;&#x2122;ve aimed to understand both the characteristics that unqiuely define a city, and those that are shared. chinatown is a visual exploration of these themes, stemming from my desire to better understand how cities operate and to contextualize these ethnic enclaves within their broader urban environments. all photos were shot on 35mm film, using either a canon ae-1p or a nikon f100. thanks for reading. agastya mondal 2019

flushing, queens, new york city flushing is home to one of the world’s largest chinatowns. i found myself there in january of 2018, when a deep polar vortex had descended on the city - pushing temperatures well below zero. nonetheless, a long ride on the MTA’s 7 train brought me to the heart of one of new york’s most lively neighborhoods.

lower east side manhattan, new york city manhattanâ&#x20AC;&#x2122;s own chinatown, situated in the diverse lower east side, is home to the highest concentration of chinese speakers in the western hemisphere. between 2017 and 2018, i made many trips to new york city and often found myself wandering through chinatownâ&#x20AC;&#x2122;s labyrinthine streets.

beach & tyler streets boston, massachusetts boston’s small chinatown is a humble but lively enclave of restaurants, bakeries, and cafes. i moved to boston in late 2018, and have since found myself wandering chinatown’s streets on many occasions. interestingly, boston’s is the only remaining chinatown in new england. these photos were primarily taken in early 2019, as winter’s grip over the city slowly loosened. A small zine of 35mm photos of my travels.

A small zine of 35mm photos of my travels.