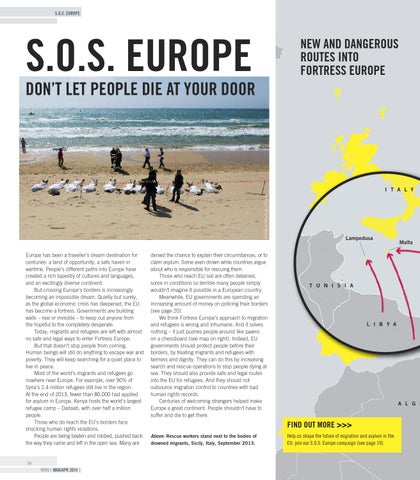 Europe has been a traveller’s dream destination for centuries: a land of opportunity, a safe haven in wartime. People’s different paths into Europe have created a rich tapestry of cultures and languages, and an excitingly diverse continent. But crossing Europe’s borders is increasingly becoming an impossible dream. Quietly but surely, as the global economic crisis has deepened, the EU has become a fortress. Governments are building walls – real or invisible – to keep out anyone from the hopeful to the completely desperate. Today, migrants and refugees are left with almost no safe and legal ways to enter Fortress Europe. But that doesn’t stop people from coming. Human beings will still do anything to escape war and poverty. They will keep searching for a quiet place to live in peace. Most of the world’s migrants and refugees go nowhere near Europe. For example, over 90% of Syria’s 2.4 million refugees still live in the region. At the end of 2013, fewer than 80,000 had applied for asylum in Europe. Kenya hosts the world’s largest refugee camp – Dadaab, with over half a million people. Those who do reach the EU’s borders face shocking human rights violations. People are being beaten and robbed, pushed back the way they came and left in the open sea. Many are

denied the chance to explain their circumstances, or to claim asylum. Some even drown while countries argue about who is responsible for rescuing them. Those who reach EU soil are often detained, some in conditions so terrible many people simply wouldn’t imagine it possible in a European country. Meanwhile, EU governments are spending an increasing amount of money on policing their borders (see page 20). We think Fortress Europe’s approach to migration and refugees is wrong and inhumane. And it solves nothing – it just pushes people around like pawns on a chessboard (see map on right). Instead, EU governments should protect people before their borders, by treating migrants and refugees with fairness and dignity. They can do this by increasing search and rescue operations to stop people dying at sea. They should also provide safe and legal routes into the EU for refugees. And they should not outsource migration control to countries with bad human rights records. Centuries of welcoming strangers helped make Europe a great continent. People shouldn’t have to suffer and die to get there.

find out more &gt;&gt;&gt; Above: Rescue workers stand next to the bodies of drowned migrants, Sicily, Italy, September 2013.

Help us shape the future of migration and asylum in the EU: join our S.O.S. Europe campaign (see page 19).

Amnesty International’s magazine for people who are passionate about human rights. 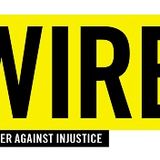