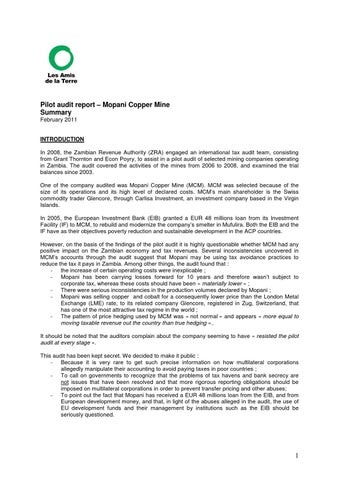 INTRODUCTION In 2008, the Zambian Revenue Authority (ZRA) engaged an international tax audit team, consisting from Grant Thornton and Econ Poyry, to assist in a pilot audit of selected mining companies operating in Zambia. The audit covered the activities of the mines from 2006 to 2008, and examined the trial balances since 2003. One of the company audited was Mopani Copper Mine (MCM). MCM was selected because of the size of its operations and its high level of declared costs. MCM’s main shareholder is the Swiss commodity trader Glencore, through Carlisa Investment, an investment company based in the Virgin Islands. In 2005, the European Investment Bank (EIB) granted a EUR 48 millions loan from its Investment Facility (IF) to MCM, to rebuild and modernize the company’s smelter in Mufulira. Both the EIB and the IF have as their objectives poverty reduction and sustainable development in the ACP countries. However, on the basis of the findings of the pilot audit it is highly questionable whether MCM had any positive impact on the Zambian economy and tax revenues. Several inconsistencies uncovered in MCM’s accounts through the audit suggest that Mopani may be using tax avoidance practices to reduce the tax it pays in Zambia. Among other things, the audit found that : - the increase of certain operating costs were inexplicable ; - Mopani has been carrying losses forward for 10 years and therefore wasn’t subject to corporate tax, whereas these costs should have been « materially lower » ; - There were serious inconsistencies in the production volumes declared by Mopani ; - Mopani was selling copper and cobalt for a consequently lower price than the London Metal Exchange (LME) rate, to its related company Glencore, registered in Zug, Switzerland, that has one of the most attractive tax regime in the world ; - The pattern of price hedging used by MCM was « not normal » and appears « more equal to moving taxable revenue out the country than true hedging ».. It should be noted that the auditors complain about the company seeming to have « resisted the pilot audit at every stage ». This audit has been kept secret. We decided to make it public : - Because it is very rare to get such precise information on how multilateral corporations allegedly manipulate their accounting to avoid paying taxes in poor countries ; - To call on governments to recognize that the problems of tax havens and bank secrecy are not issues that have been resolved and that more rigorous reporting obligations should be imposed on multilateral corporations in order to prevent transfer pricing and other abuses; - To point out the fact that Mopani has received a EUR 48 millions loan from the EIB, and from European development money, and that, in light of the abuses alleged in the audit, the use of EU development funds and their management by institutions such as the EIB should be seriously questioned.

INSIGHT OF THE MAIN FINDINGS The company delayed the audit by refusing to collaborate with the auditors and provided inconsistent data ZRA was auditing on a very clear legal basis and the company had no right to delay delivering information when it was requested by the auditors. However, it « resisted the pilot audit at every stage ». As a result, the audit process (Dec 2008 – Oct 2009) only advanced slowly and with a lot of difficulties. The start-up had to be postponed several times due to a lack of participation by Mopani. The audit team notes that they have not experienced such a lack of compliance in any other country nor in any other sector within Zambia. The company’s book keeping was incomplete, several legally required documents were lacking and the general ledger analysis showed several loopholes and couldn’t be matched with the trial balance. The costs and losses of the company are abnormally high The audit team noted that several costs have increased without explanation. Mopani cost base are USD 381,21 millions higher in 2007 than in 2005, compared to what would be expected based on a comparison with national indexes, price developments and on the changes of production volume in Mopani mine. No structural change can explain the increase of these costs. Increases of the labour costs, fuels costs, mining cost, insurance, security and safety costs, and residual costs are inexplicable according to the audit team. One explanation could be that the these costs were taken as expenses whereas they should have been capitalized. The auditors concluded that “the Mopani cost structure cannot be trusted to represent the true nature of the costs of the Mopani mining operation.” In addition, the auditors pointed out that Mopani was overbilled for transport costs, and that the company may be using incorrect disposal proceeds for tax purposes : « there is an inconsistent profit/lost on disposal of fixes assets. » Finally, it appears that because of losses carried forward since 2000, Mopani has not paid any corporate tax to the Zambian government. However, the auditors questioned the extent of the declared losses, suggesting that they were in fact “materially lower” than the company claimed.. Transfer pricing : Mopani is selling its production to its mother company Glencore at a low price allegedly to move taxable revenues out of Zambia. Several inconsistencies were found in the production figures declared by Mopani. As a result, the auditors found it difficult to determine the real production volume of the company, notably because of the lack of border control in Zambia and the weak reporting of the Ministry of Mines. However, the auditors found that some claimed production figures were not believable and, in the case of cobalt production, suggest that Mopani « has been faking the numbers in order to have the production figures fit with the cobalt revenue in the account ». Mopani sells most of its overall production to Glencore, its mother company based in Zug. The audit team believes that “the related party sales and pricing mechanisms are not in line with the agreement 1 disclosed or the arms length principle .” Incredibly, they record that the price paid for the mine’s copper “seems to be determined by the parent company i.e. the purchaser”. The audit also notes that there is a significant pricing problem for copper in Mopani. The gap in copper prices between Mopani and LME (London Metal Exchange) is increasing. Between 2003 and 2008 there is a cumulated difference in revenues of approximately USD 700 millions in copper revenue only. There is reason to believe that there are similar problems with cobalt, as it is consistently sold below LME price.

The OECD has adopted the arms length principle in Article 9 of the OECD Model Tax Convention, to ensure that transfer prices between companies of multinational enterprises are established on a market value basis. In this context, the principle means that prices should be the same as they would have been, had the parties to the transaction not been related to each other.

The auditors believes that Mopani is using transfer pricing to avoid paying taxes in Zambia. In particular, they raise questions over the hedging practices used in relation to Mopani. Hedging involves entering in a contract to sell a given commodity (in this instance copper) at an agreed price at a given date in the future. Normally, companies try to secure the highest price possible. But, in the case of Mopani, the hedges seems to have used to lock in prices at the bottom end of the price cycle, ensuring that the company would loses money both when prices are rising and when they are falling. The purchaser (in Mopani’s case, Glencore) would thus be able to buy low and sell high – but because Glencore is registered outside of Zambia, the profit would be made in another jurisdiction and would not therefore be subject to Zambian taxes. The auditors conclude :« There is . . . reason to recognize the ‘hedging’ of Mopani (done with an internal party or on volumes that is sold internally) as moving taxable revenue out of Zambia, and thus there is reason to disallow the « hedging » / use of derivatives as not being arm’s length under the OECD transfer pricing guidelines. »

RECOMMANDATIONS This case shows that the EIB and the EC have completely failed to comply with their responsibilities, and that that this is necessary to ensure greater financial transparency and put an end to tax avoidance practices that damage local communities in the South and European taxpayers. Therefore, les Amis de la Terre, Counter Balance, Tax Justice Network, Eurodad and CTPD recommend : • That the European parliament conducts an independent investigation into the EC and EIB due diligence processes ; • That the EU supports the principle of a mandatory country-by-country reporting for corporate financial information.

Pilot audit report about the Mopani Copper Mine - Summary 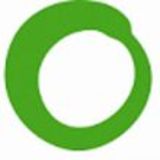