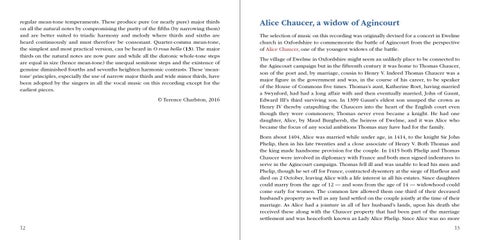 regular mean-tone temperaments. These produce pure (or nearly pure) major thirds on all the natural notes by compromising the purity of the fifths (by narrowing them) and are better suited to triadic harmony and melody where thirds and sixths are heard continuously and must therefore be consonant. Quarter-comma mean-tone, the simplest and most practical version, can be heard in O rosa bella (13). The major thirds on the natural notes are now pure and while all the diatonic whole-tone steps are equal in size (hence mean-tone) the unequal semitone steps and the existence of genuine diminished fourths and sevenths heighten harmonic contrasts. These ‘meantone’ principles, especially the use of narrow major thirds and wide minor thirds, have been adopted by the singers in all the vocal music on this recording except for the earliest pieces.

Alice Chaucer, a widow of Agincourt The selection of music on this recording was originally devised for a concert in Ewelme church in Oxfordshire to commemorate the battle of Agincourt from the perspective of Alice Chaucer, one of the youngest widows of the battle. The village of Ewelme in Oxfordshire might seem an unlikely place to be connected to the Agincourt campaign but in the fifteenth century it was home to Thomas Chaucer, son of the poet and, by marriage, cousin to Henry V. Indeed Thomas Chaucer was a major figure in the government and was, in the course of his career, to be speaker of the House of Commons five times. Thomas’s aunt, Katherine Roet, having married a Swynford, had had a long affair with and then eventually married, John of Gaunt, Edward III’s third surviving son. In 1399 Gaunt’s eldest son usurped the crown as Henry IV thereby catapulting the Chaucers into the heart of the English court even though they were commoners; Thomas never even became a knight. He had one daughter, Alice, by Maud Burghersh, the heiress of Ewelme, and it was Alice who became the focus of any social ambitions Thomas may have had for the family. Born about 1404, Alice was married while under age, in 1414, to the knight Sir John Phelip, then in his late twenties and a close associate of Henry V. Both Thomas and the king made handsome provision for the couple. In 1415 both Phelip and Thomas Chaucer were involved in diplomacy with France and both men signed indentures to serve in the Agincourt campaign. Thomas fell ill and was unable to lead his men and Phelip, though he set off for France, contracted dysentery at the siege of Harfleur and died on 2 October, leaving Alice with a life interest in all his estates. Since daughters could marry from the age of 12 — and sons from the age of 14 — widowhood could come early for women. The common law allowed them one third of their deceased husband’s property as well as any land settled on the couple jointly at the time of their marriage. As Alice had a jointure in all of her husband’s lands, upon his death she received these along with the Chaucer property that had been part of the marriage settlement and was henceforth known as Lady Alice Phelip. Since Alice was no more

Our programme of vocal and keyboard music from the period of the Battle of Agincourt was devised as part of the commemoration events which took place in October 2015 to mark the battle's 600th anniversary. Thanks to the support of the Agincourt 600 Commemoration Fund the programme was recorded in early 2016, forming an unusual and unique response in words and music to this pivotal and controversial historical event. This document is the accompanying CD booklet which discusses the musical works, the Battle's historical significance and gives more information about the performers involved.