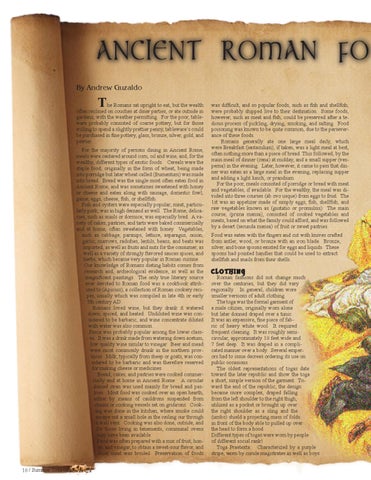 often reclined TheonRomans sat upright to eat, but the wealth couches at diner parties, or ate outside in

gardens, with the weather permitting. For the poor, tableware probably consisted of coarse pottery, but for those willing to spend a slightly prettier penny, tableware’s could be purchased in fine pottery, glass, bronze, silver, gold, and pewter. For the majority of persons dining in Ancient Rome, meals were centered around corn, oil and wine, and, for the wealthy, different types of exotic foods.   Cereals were the staple food; originally in the form of wheat, being made into porridge but later wheat called (frumentum) was made into bread.  Bread was the single most often eaten food in Ancient Rome, and was sometimes sweetened with honey or cheese and eaten along with sausage, domestic fowl, game, eggs, cheese, fish, or shellfish. Fish and oysters were especially popular; meat, particularly pork, was in high demand as well.  The Rome, delicacies, such as snails or dormice, was especially bred.  A variety of cakes, pastries, and tarts were baked commercially and at home, often sweetened with honey.  Vegetables, such as cabbage, parsnips, lettuce, asparagus, onion, garlic, marrows, radishes, lentils, beans, and beats was imported, as well as fruits and nuts for the consumer, as well as a variety of strongly flavored sauces spices, and herbs, which became very popular in Roman cuisine.  Our knowledge of Romans dieting habits comes from research and, archeological evidence, as well as the magnificent paintings.  The only true literary source ever devoted to Roman food was a cookbook attributed to (Apicius), a collection of Roman cookery recipes, usually which was compiled in late 4th or early 5th century AD. Romans loved wine, but they drank it watered down, spiced, and heated.  Undiluted wine was considered to be barbaric, and wine concentrate diluted with water was also common. Pasca was probably popular among the lower classes.  It was a drink made from watering down acetum, low quality wine similar to vinegar.  Beer and mead were most commonly drunk in the northern provinces.  Milk, typically from sheep or goats, was considered to be barbaric and was therefore reserved for making cheese or medicines. Bread, cakes, and pastries were cooked commercially and at home in Ancient Rome.   A circular domed oven was used mainly for bread and pastries.  Most food was cooked over an open hearth, either by means of cauldrons suspended from chains or cooking vessels set on gridirons.  Cooking was done in the kitchen, where smoke could escape out a small hole in the ceiling our through a wall vent.  Cooking was also done, outside, and for those living in tenements, communal ovens may have been available.   Food was often prepared with a mix of fruit, honey, and vinegar, to obtain a sweet-sour flavor, and most meat was broiled.  Preservation of foods 18 / Summer 2011

was difficult, and so popular foods, such as fish and shellfish, were probably shipped live to their destination. Some foods, however, such as meat and fish, could be preserved after a tedious process of pickling, drying, smoking, and salting.  Food poisoning was known to be quite common, due to the perseverance of these foods. Romans generally ate one large meal daily, which were Breakfast (ientaculum), if taken, was a light meal at best, often nothing more than a piece of bread. This followed, by the main meal of dinner (cena) at midday, and a small supper (vesperna) in the evening.  Later, however, it came to pass that dinner was eaten as a large meal in the evening, replacing supper and adding a light lunch, or prandium. For the poor, meals consisted of porridge or bread with meat and vegetables, if available.  For the wealthy, the meal was divided into three courses (ab ovo usque) from eggs to fruit.  The 1st was an appetizer made of simply eggs, fish, shellfish, and raw vegetables known as (gustatio or promulsis).  The main course, (prima mensa), consisted of cooked vegetables and meats, based on what the family could afford, and was followed by a desert (secunda mensa) of fruit or sweet pastries. Food was eaten with the fingers and cut with knives crafted from antler, wood, or bronze with an iron blade.  Bronze, silver, and bone spoons existed for eggs and liquids.  These spoons had pointed handles that could be used to extract shellfish and snails from their shells. CLOTHING Roman fashions did not change much over the centuries, but they did vary regionally.   In general, children wore smaller versions of adult clothing. The toga was the formal garment of a male citizen, originally worn alone but later donned draped over a tunic.  It was an expensive, fine piece of fabric of heavy white wool.  It required frequent cleaning.  It was roughly semicircular, approximately 18 feet wide and 7 feet deep.  It was draped in a complicated manner over a body.  Several emperors had to issue decrees ordering its use on public occasions. The oldest representations of togas date toward the later republic and show the toga a short, simple version of the garment.  Toward the end of the republic, the design became more complex, draped falling from the left shoulder to the right thigh, utilized as a pocket or brought up over the right shoulder as a sling and the (umbo) shield a projecting mass of folds in front of the body able to pulled up over the head to form a hood. Different types of togas were worn by people of different social rank! Toga Praetexta:   Characterized by a purple stripe, worn by curule magistrates as well as boys

OD AND CLOTHING until the age of 15 or 16. Toga Virilis:  The plain toga of a typical citizen.  Worn by boys after age 15 or 16. Toga Picta:  A crimson toga embroidered with gold, donned by victorious generals in triumphal processions and the emperors. Toga  Candida:   A toga given a shiny, glossy look by rubbing it with chalk, worn by people running for public office. Toga Pulla:  Made of natural black wool and worn in funerals. Senatorial togas had a large purple stripe (latus clavus).  Equestrians wore a toga with a narrow purple stripe (clavus angustus).  The basic garment of a Roman male, however, was the shortsleeved tunic, worn tied around the waist with a belt.   It was normally worn indoors, as well as by slaves and children.  Long tunics with sleeves were considered effeminate.  Extra tunics were worn in colder weather.   Senators and equestrians wore tunics with broad and narrow purple stripes, respectively, running from soldier to hip on both sides.  Tunics worn by charioteers were dyed the color of their faction.

The dalmatic (dalmatica) was originally a short-sleeved or sleeveless tunic, but by the empire it had long sleeves. It was made of wool, linen, or silk, and worn by people in high position and later as an ecclesiastical garment. Some calvarymen and soldiers wore trousers, but in general it was thought that long woolen trousers (braca) were uncouth, worn by barbarians outside the empire. Capes and cloaks are also known to exist, made from either wool or leather, sometimes with hoods, such as the palla, lacerna, paenula, caracallus, cucullus, sagnum, and byrrus. Beards were fashionable in early Rome, but did not become popular again until the time of Hadrian. 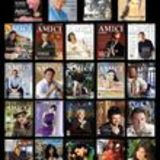