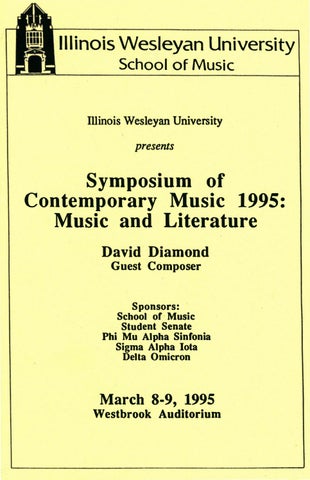 David Diamond. one of the most important American composers of this century. was praised b y the late Leonard Bernstein as expressing -the most lasting a esthetic values&quot; in his music. Diamond&#39;s compositions draw on ttaditional principles of balance. form and countelpoint, expressing these in a deeply personal and thoroughly contemporary musical language. Writing in The New Grove Dictionory of American Music. composer Francis &#39;Thome writes that &quot;Diamond&#39;s meticulous craftsmanship and his sensibility have assured his position as a 2Oth-century classicisL&quot; David Leo Diamond was born in Rochester. New York on July 9. 1915. His formal musical ttaining began at age 12 at the Cleveland Instiwte of Music. and continued in Rochester at the Easbnan School of Music. in New York City at the New Music School and Dalcroze Institute. and in Paris in the classes of Nadia Boulanger. the legendary mentor to a generation of American composers. Diamond&#39;s contact with the celebrated American poet E. E. Cummings began in 1935. when he was commissioned by a private patton to compose the music to TO M. a ballet scenario written by Cummings. Other eminent figures of the time with whom he was associated include Maurice Ravel. Willem de Kooning. and Andre Gide. After living alternately in New York and Paris for a number of years. Diamond moved in 195 I to Italy. where he served for a year as Fulbright professor at the University of Rome and then moved to Florence. In 1965 be returned pe..rmanently to the United States. and he presently resides in Rocbestet. his native city. Among his numerous awards. Diamond is the recipi ent of three Guggenheim Fellowships. the Rome Prize. a National Institute of Ans and Letters Grant, and commissions from the Fromm. Kousscvitsky and Rockefeller foundations. C urrently a professor at the JuiUiard School in New York City. he has also taught in Salzburg. Austria, at the Harvard Seminar in American Studies. at SUNY Buffalo. the University of Colorado. and the Manhattan School of Music. His prolific output includes nine symphonies and many other orchestral pieces. over 80 songs, ten string quartets, six mm scores. and numerous works f(X&#39; chorus, piano, chamber ensembles. and other media.

As a closing accolade to Mr. Diamond. we can do no beUcr than to quote his own words: &quot;A composer&#39;s greatness is gauged by how he enlarges and extends spiritual communication between himself and humanity ...&quot; By that measure. as we will hear during this two-day celebration of his music. he has deservedly won a lasting place in the history of musical BtL

I Shall Imagine Life

Program for the 43rd annual symposium, presented by the Illinois Wesleyan University School of Music, March 8-9, 1995. Featured guest for 1995 was composer David Diamond.