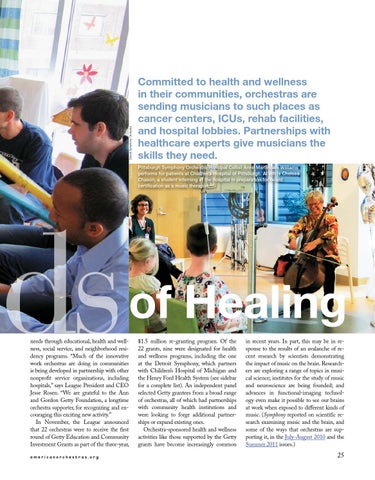 Pittsburgh Symphony Orchestra Principal Cellist Anne Martindale Williams performs for patients at Children’s Hospital of Pittsburgh. At left is Chelsea Chason, a student interning at the hospital in preparation for board certification as a music therapist.

needs through educational, health and wellness, social service, and neighborhood residency programs. “Much of the innovative work orchestras are doing in communities is being developed in partnership with other nonprofit service organizations, including hospitals,” says League President and CEO Jesse Rosen. “We are grateful to the Ann and Gordon Getty Foundation, a longtime orchestra supporter, for recognizing and encouraging this exciting new activity.” In November, the League announced that 22 orchestras were to receive the first round of Getty Education and Community Investment Grants as part of the three-year, americanorchestras.org

Committed to health and wellness in their communities, orchestras are sending musicians to such places as cancer centers, ICUs, rehab facilities, and hospital lobbies. Partnerships with healthcare experts give musicians the skills they need.

$1.5 million re-granting program. Of the 22 grants, nine were designated for health and wellness programs, including the one at the Detroit Symphony, which partners with Children’s Hospital of Michigan and the Henry Ford Health System (see sidebar for a complete list). An independent panel selected Getty grantees from a broad range of orchestras, all of which had partnerships with community health institutions and were looking to forge additional partnerships or expand existing ones. Orchestra-sponsored health and wellness activities like those supported by the Getty grants have become increasingly common

in recent years. In part, this may be in response to the results of an avalanche of recent research by scientists demonstrating the impact of music on the brain. Researchers are exploring a range of topics in musical science; institutes for the study of music and neuroscience are being founded; and advances in functional-imaging technology even make it possible to see our brains at work when exposed to different kinds of music. (Symphony reported on scientific research examining music and the brain, and some of the ways that orchestras are supporting it, in the July-August 2010 and the Summer 2011 issues.)