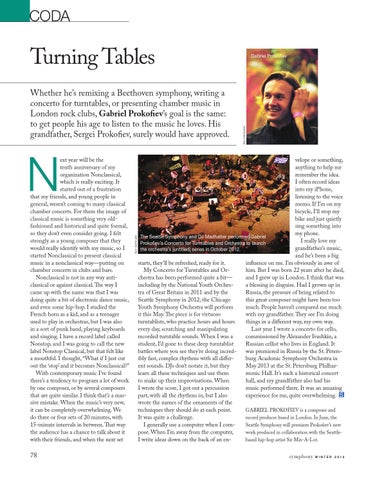 ext year will be the tenth anniversary of my organization Nonclassical, which is really exciting. It started out of a frustration that my friends, and young people in general, weren’t coming to many classical chamber concerts. For them the image of classical music is something very oldfashioned and historical and quite formal, so they don’t even consider going. I felt strongly as a young composer that they would really identify with my music, so I started Nonclassical to present classical music in a nonclassical way—putting on chamber concerts in clubs and bars. Nonclassical is not in any way anticlassical or against classical. The way I came up with the name was that I was doing quite a bit of electronic dance music, and even some hip-hop. I studied the French horn as a kid, and as a teenager used to play in orchestras, but I was also in a sort of punk band, playing keyboards and singing. I have a record label called Nonstop, and I was going to call the new label Nonstop Classical, but that felt like a mouthful. I thought, “What if I just cut out the ‘stop’ and it becomes Nonclassical?” With contemporary music I’ve found there’s a tendency to program a lot of work by one composer, or by several composers that are quite similar. I think that’s a massive mistake. When the music’s very new, it can be completely overwhelming. We do three or four sets of 20 minutes, with 15-minute intervals in between. That way the audience has a chance to talk about it with their friends, and when the next set

Whether he’s remixing a Beethoven symphony, writing a concerto for turntables, or presenting chamber music in London rock clubs, Gabriel Prokofiev’s goal is the same: to get people his age to listen to the music he loves. His grandfather, Sergei Prokofiev, surely would have approved.

velope or something, anything to help me remember the idea. I often record ideas into my iPhone, listening to the voice memo. If I’m on my bicycle, I’ll stop my bike and just quietly sing something into my phone. The Seattle Symphony and DJ Madhatter performed Gabriel I really love my Prokofiev’s Concerto for Turntables and Orchestra to launch grandfather’s music, the orchestra’s [untitled] series in October 2012. and he’s been a big starts, they’ll be refreshed, ready for it. influence on me. I’m obviously in awe of My Concerto for Turntables and Orhim. But I was born 22 years after he died, chestra has been performed quite a bit— and I grew up in London. I think that was including by the National Youth Orchesa blessing in disguise. Had I grown up in tra of Great Britain in 2011 and by the Russia, the pressure of being related to Seattle Symphony in 2012; the Chicago this great composer might have been too Youth Symphony Orchestra will perform much. People haven’t compared me much it this May. The piece is for virtuoso with my grandfather. They see I’m doing turntablists, who practice hours and hours things in a different way, my own way. every day, scratching and manipulating Last year I wrote a concerto for cello, recorded turntable sounds. When I was a commissioned by Alexander Ivashkin, a student, I’d gone to these deep turntablist Russian cellist who lives in England. It battles where you see they’re doing incredwas premiered in Russia by the St. Petersibly fast, complex rhythms with all differburg Academic Symphony Orchestra in ent sounds. DJs don’t notate it, but they May 2013 at the St. Petersburg Philharlearn all these techniques and use them monic Hall. It’s such a historical concert to make up their improvisations. When hall, and my grandfather also had his I wrote the score, I got out a percussion music performed there. It was an amazing part, with all the rhythms in, but I also experience for me, quite overwhelming. wrote the names of the ornaments of the techniques they should do at each point. GABRIEL PROKOFIEV is a composer and It was quite a challenge. record producer based in London. In June, the I generally use a computer when I comSeattle Symphony will premiere Prokofiev’s new pose. When I’m away from the computer, work produced in collaboration with the SeattleI write ideas down on the back of an enbased hip-hop artist Sir Mix-A-Lot. symphony