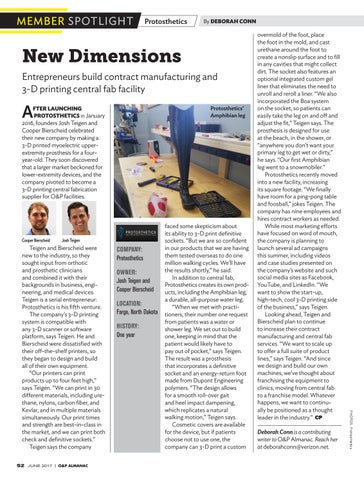 2016, founders Josh Teigen and Cooper Bierscheid celebrated their new company by making a 3-D printed myoelectric upperextremity prosthesis for a fouryear-old. They soon discovered that a larger market beckoned for lower-extremity devices, and the company pivoted to become a 3-D printing central fabrication supplier for O&P facilities.

Deborah Conn is a contributing writer to O&P Almanac. Reach her at deborahconn@verizon.net.

Teigen and Bierscheid were new to the industry, so they sought input from orthotic and prosthetic clinicians and combined it with their backgrounds in business, engineering, and medical devices. Teigen is a serial entrepreneur: Protosthetics is his fifth venture. The company’s 3-D printing system is compatible with any 3-D scanner or software platform, says Teigen. He and Bierscheid were dissatisfied with their off-the-shelf printers, so they began to design and build all of their own equipment. “Our printers can print products up to four feet high,” says Teigen. “We can print in 30 different materials, including urethane, nylons, carbon fiber, and Kevlar, and in multiple materials simultaneously. Our print times and strength are best-in-class in the market, and we can print both check and definitive sockets.” Teigen says the company

faced some skepticism about its ability to 3-D print definitive sockets. “But we are so confident in our products that we are having them tested overseas to do one million walking cycles. We’ll have the results shortly,” he said. In addition to central fab, Protosthetics creates its own products, including the Amphibian leg, a durable, all-purpose water leg. “When we met with practitioners, their number one request from patients was a water or shower leg. We set out to build one, keeping in mind that the patient would likely have to pay out of pocket,” says Teigen. The result was a prosthesis that incorporates a definitive socket and an energy-return foot made from Dupont Engineering polymers. “The design allows for a smooth roll-over gait and heel impact dampening, which replicates a natural walking motion,” Teigen says. Cosmetic covers are available for the device, but if patients choose not to use one, the company can 3-D print a custom

overmold of the foot, place the foot in the mold, and cast urethane around the foot to create a nonslip surface and to fill in any cavities that might collect dirt. The socket also features an optional integrated custom gel liner that eliminates the need to unroll and reroll a liner. “We also incorporated the Boa system on the socket, so patients can easily take the leg on and off and adjust the fit,” Teigen says. The prosthesis is designed for use at the beach, in the shower, or “anywhere you don’t want your primary leg to get wet or dirty,” he says. “Our first Amphibian leg went to a snowmobiler.” Protosthetics recently moved into a new facility, increasing its square footage. “We finally have room for a ping-pong table and foosball,” jokes Teigen. The company has nine employees and hires contract workers as needed. While most marketing efforts have focused on word of mouth, the company is planning to launch several ad campaigns this summer, including videos and case studies presented on the company’s website and such social media sites as Facebook, YouTube, and LinkedIn. “We want to show the start-up, high-tech, cool 3-D printing side of the business,” says Teigen. Looking ahead, Teigen and Bierscheid plan to continue to increase their contract manufacturing and central fab services. “We want to scale up to offer a full suite of product lines,” says Teigen. “And since we design and build our own machines, we’ve thought about franchising the equipment to clinics, moving from central fab to a franchise model. Whatever happens, we want to continually be positioned as a thought leader in the industry.”