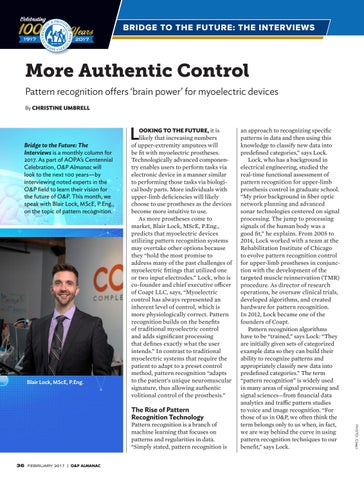 BRIDGE TO THE FUTURE: THE INTERVIEWS

Bridge to the Future: The Interviews is a monthly column for 2017. As part of AOPA’s Centennial Celebration, O&P Almanac will look to the next 100 years—by interviewing noted experts in the O&P field to learn their vision for the future of O&P. This month, we speak with Blair Lock, MScE, P.Eng., on the topic of pattern recognition.

OOKING TO THE FUTURE, it is likely that increasing numbers of upper-extremity amputees will be fit with myoelectric prostheses. Technologically advanced componentry enables users to perform tasks via electronic device in a manner similar to performing those tasks via biological body parts. More individuals with upper-limb deficiencies will likely choose to use prostheses as the devices become more intuitive to use. As more prostheses come to market, Blair Lock, MScE, P.Eng., predicts that myoelectric devices utilizing pattern recognition systems may overtake other options because they “hold the most promise to address many of the past challenges of myoelectric fittings that utilized one or two input electrodes.” Lock, who is co-founder and chief executive officer of Coapt LLC, says, “Myoelectric control has always represented an inherent level of control, which is more physiologically correct. Pattern recognition builds on the benefits of traditional myoelectric control and adds significant processing that defines exactly what the user intends.” In contrast to traditional myoelectric systems that require the patient to adapt to a preset control method, pattern recognition “adapts to the patient’s unique neuromuscular signature, thus allowing authentic volitional control of the prosthesis.”

The Rise of Pattern Recognition Technology

an approach to recognizing specific patterns in data and then using this knowledge to classify new data into predefined categories,” says Lock. Lock, who has a background in electrical engineering, studied the real-time functional assessment of pattern recognition for upper-limb prosthesis control in graduate school. “My prior background in fiber optic network planning and advanced sonar technologies centered on signal processing. The jump to processing signals of the human body was a good fit,” he explains. From 2005 to 2014, Lock worked with a team at the Rehabilitation Institute of Chicago to evolve pattern recognition control for upper-limb prostheses in conjunction with the development of the targeted muscle reinnervation (TMR) procedure. As director of research operations, he oversaw clinical trials, developed algorithms, and created hardware for pattern recognition. In 2012, Lock became one of the founders of Coapt. Pattern recognition algorithms have to be “trained,” says Lock: “They are initially given sets of categorized example data so they can build their ability to recognize patterns and appropriately classify new data into predefined categories.” The term “pattern recognition” is widely used in many areas of signal processing and signal sciences—from financial data analytics and traffic pattern studies to voice and image recognition. “For those of us in O&P, we often think the term belongs only to us when, in fact, we are way behind the curve in using pattern recognition techniques to our benefit,” says Lock.