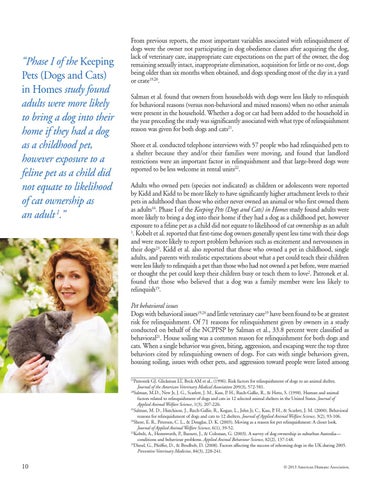 “Phase I of the Keeping Pets (Dogs and Cats) in Homes study found adults were more likely to bring a dog into their home if they had a dog as a childhood pet, however exposure to a feline pet as a child did not equate to likelihood of cat ownership as an adult 1.”

From previous reports, the most important variables associated with relinquishment of dogs were the owner not participating in dog obedience classes after acquiring the dog, lack of veterinary care, inappropriate care expectations on the part of the owner, the dog remaining sexually intact, inappropriate elimination, acquisition for little or no cost, dogs being older than six months when obtained, and dogs spending most of the day in a yard or crate19,20. Salman et al. found that owners from households with dogs were less likely to relinquish for behavioral reasons (versus non-behavioral and mixed reasons) when no other animals were present in the household. Whether a dog or cat had been added to the household in the year preceding the study was significantly associated with what type of relinquishment reason was given for both dogs and cats21. Shore et al. conducted telephone interviews with 57 people who had relinquished pets to a shelter because they and/or their families were moving, and found that landlord restrictions were an important factor in relinquishment and that large-breed dogs were reported to be less welcome in rental units22. Adults who owned pets (species not indicated) as children or adolescents were reported by Kidd and Kidd to be more likely to have significantly higher attachment levels to their pets in adulthood than those who either never owned an animal or who first owned them as adults16. Phase I of the Keeping Pets (Dogs and Cats) in Homes study found adults were more likely to bring a dog into their home if they had a dog as a childhood pet, however exposure to a feline pet as a child did not equate to likelihood of cat ownership as an adult 1 . Kobelt et al. reported that first-time dog owners generally spent less time with their dogs and were more likely to report problem behaviors such as excitement and nervousness in their dogs23. Kidd et al. also reported that those who owned a pet in childhood, single adults, and parents with realistic expectations about what a pet could teach their children were less likely to relinquish a pet than those who had not owned a pet before, were married or thought the pet could keep their children busy or teach them to love2. Patronek et al. found that those who believed that a dog was a family member were less likely to relinquish19. Pet behavioral issues Dogs with behavioral issues19,24 and little veterinary care19 have been found to be at greatest risk for relinquishment. Of 71 reasons for relinquishment given by owners in a study conducted on behalf of the NCPPSP by Salman et al., 33.8 percent were classified as behavioral21. House soiling was a common reason for relinquishment for both dogs and cats. When a single behavior was given, biting, aggression, and escaping were the top three behaviors cited by relinquishing owners of dogs. For cats with single behaviors given, housing soiling, issues with other pets, and aggression toward people were listed among 19 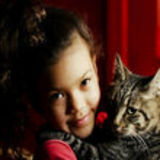