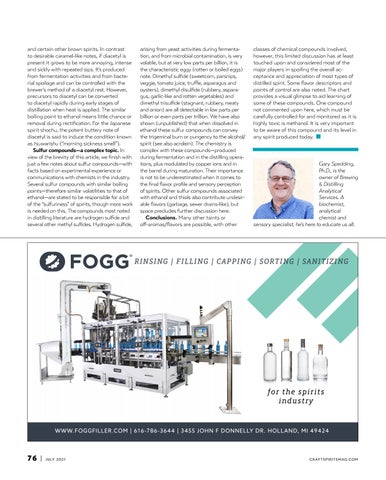 and certain other brown spirits. In contrast to desirable caramel-like notes, if diacetyl is present it grows to be more annoying, intense and sickly with repeated sips. It’s produced from fermentation activities and from bacterial spoilage and can be controlled with the brewer’s method of a diacetyl rest. However, precursors to diacetyl can be converted to diacetyl rapidly during early stages of distillation when heat is applied. The similar boiling point to ethanol means little chance or removal during rectification. For the Japanese spirit shochu, the potent buttery note of diacetyl is said to induce the condition known as tsuwarishu (“morning sickness smell”). Sulfur compounds—a complex topic. In view of the brevity of this article, we finish with just a few notes about sulfur compounds—with facts based on experimental experience or communications with chemists in the industry. Several sulfur compounds with similar boiling points—therefore similar volatilities to that of ethanol—are stated to be responsible for a bit of the “sulfuriness” of spirits, though more work is needed on this. The compounds most noted in distilling literature are hydrogen sulfide and several other methyl sulfides. Hydrogen sulfide,

arising from yeast activities during fermentation, and from microbial contamination, is very volatile, but at very low parts per billion, it is the characteristic eggy (rotten or boiled eggs) note. Dimethyl sulfide (sweetcorn, parsnips, veggie, tomato juice, truffle, asparagus and oysters), dimethyl disulfide (rubbery, asparagus, garlic-like and rotten vegetables) and dimethyl trisulfide (stagnant, rubbery, meaty and onion) are all detectable in low parts per billion or even parts per trillion. We have also shown (unpublished) that when dissolved in ethanol these sulfur compounds can convey the trigeminal burn or pungency to the alcohol/ spirit (see also acrolein). The chemistry is complex with these compounds—produced during fermentation and in the distilling operations, plus modulated by copper ions and in the barrel during maturation. Their importance is not to be underestimated when it comes to the final flavor profile and sensory perception of spirits. Other sulfur compounds associated with ethanol and thiols also contribute undesirable flavors (garbage, sewer drains-like), but space precludes further discussion here. Conclusions. Many other taints or off-aromas/flavors are possible, with other

classes of chemical compounds involved, however, this limited discussion has at least touched upon and considered most of the major players in spoiling the overall acceptance and appreciation of most types of distilled spirit. Some flavor descriptors and points of control are also noted. The chart provides a visual glimpse to aid learning of some of these compounds. One compound not commented upon here, which must be carefully controlled for and monitored as it is highly toxic is methanol. It is very important to be aware of this compound and its level in any spirit produced today. ■

Gary Spedding, Ph.D., is the owner of Brewing &amp; Distilling Analytical Services. A biochemist, analytical chemist and sensory specialist, he’s here to educate us all.

for the spirits industry