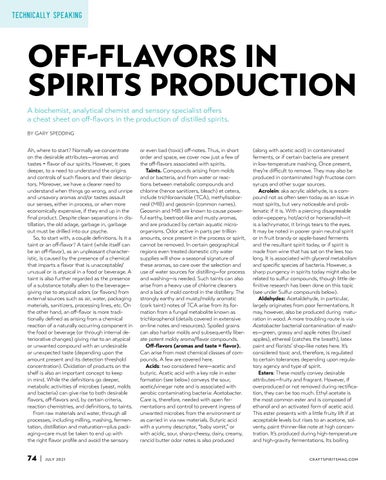 OFF-FLAVORS IN SPIRITS PRODUCTION A biochemist, analytical chemist and sensory specialist offers a cheat sheet on off-flavors in the production of distilled spirits. BY GARY SPEDDING

Ah, where to start? Normally we concentrate on the desirable attributes—aromas and tastes = flavor of our spirits. However, it goes deeper, to a need to understand the origins and controls of such flavors and their descriptors. Moreover, we have a clearer need to understand when things go wrong, and unripe and unsavory aromas and/or tastes assault our senses, either in process, or when more economically expensive, if they end up in the final product. Despite clean separations in distillation, the old adage, garbage in, garbage out must be drilled into our psyche. So, to start with, a couple definitions. Is it a taint or an off-flavor? A taint (while itself can be an off-flavor), as an unpleasant characteristic, is caused by the presence of a chemical that imparts a flavor that is unacceptable/ unusual or is atypical in a food or beverage. A taint is also further regarded as the presence of a substance totally alien to the beverage— giving rise to atypical odors (or flavors) from external sources such as air, water, packaging materials, sanitizers, processing lines, etc. On the other hand, an off-flavor is more traditionally defined as arising from a chemical reaction of a naturally occurring component in the food or beverage (or through internal deteriorative changes) giving rise to an atypical or unwanted compound with an undesirable or unexpected taste (depending upon the amount present and its detection threshold concentration). Oxidation of products on the shelf is also an important concept to keep in mind. While the definitions go deeper, metabolic activities of microbes (yeast, molds and bacteria) can give rise to both desirable flavors, off-flavors and, by certain criteria, reaction chemistries, and definitions, to taints. From raw materials and water, through all processes, including milling, mashing, fermentation, distillation and maturation—plus packaging—care must be taken to end up with the right flavor profile and avoid the sensory

or even bad (toxic) off-notes. Thus, in short order and space, we cover now just a few of the off-flavors associated with spirits. Taints. Compounds arising from molds and or bacteria, and from water or reactions between metabolic compounds and chlorine (hence sanitizers, bleach) et cetera, include trichloroanisole (TCA), methylisoborneol (MIB) and geosmin (common names). Geosmin and MIB are known to cause powerful earthy, beetroot-like and musty aromas, and are produced by certain aquatic microorganisms. Odor active in parts per trillion amounts, once present in the process or spirit, cannot be removed. In certain geographical regions even treated domestic city water supplies will show a seasonal signature of these aromas, so care over the selection and use of water sources for distilling—for process and washing—is needed. Such taints can also arise from a heavy use of chlorine cleaners and a lack of mold control in the distillery. The strongly earthy and musty/moldy aromatic (cork taint) notes of TCA arise from its formation from a fungal metabolite known as trichlorophenol (details covered in extensive on-line notes and resources). Spoiled grains can also harbor molds and subsequently liberate potent moldy aroma/flavor compounds. Off-flavors (aromas and taste = flavor). Can arise from most chemical classes of compounds. A few are covered here. Acids: two considered here—acetic and butyric. Acetic acid with a key role in ester formation (see below) conveys the sour, acetic/vinegar note and is associated with aerobic contaminating bacteria: Acetobacter. Care is, therefore, needed with open fermentations and control to prevent ingress of unwanted microbes from the environment or as carried in via raw materials. Butyric acid with a yummy descriptor, “baby vomit,” or with acidic, sour, sharp-cheesy, dairy, creamy, rancid butter odor notes is also produced

(along with acetic acid) in contaminated ferments, or if certain bacteria are present in low-temperature mashing. Once present, they’re difficult to remove. They may also be produced in contaminated high fructose corn syrups and other sugar sources. Acrolein: aka acrylic aldehyde, is a compound not as often seen today as an issue in most spirits, but very noticeable and problematic if it is. With a piercing disagreeable odor—peppery, hot/acrid or horseradish—it is a lachrymator, it brings tears to the eyes. It may be noted in poorer grain neutral spirit or in fruit brandy or apple-based ferments and the resultant spirit today, or if spirit is made from wine that has sat on the lees too long. It is associated with glycerol metabolism and specific species of bacteria. However, a sharp pungency in spirits today might also be related to sulfur compounds, though little definitive research has been done on this topic (see under Sulfur compounds below). Aldehydes: Acetaldehyde, in particular, largely originates from poor fermentations. It may, however, also be produced during maturation in wood. A more troubling route is via Acetobacter bacterial contamination of mashes—green, grassy and apple notes (bruised apples), ethereal (catches the breath), latex paint and florists’ shop-like notes here. It’s considered toxic and, therefore, is regulated to certain tolerances depending upon regulatory agency and type of spirit. Esters: These mostly convey desirable attributes—fruity and fragrant. However, if overproduced or not removed during rectification, they can be too much. Ethyl acetate is the most common ester and is composed of ethanol and an activated form of acetic acid. This ester presents with a little fruity lift if at acceptable levels but rises to an acetone, solventy, paint thinner-like note at high concentration. It’s produced during high-temperature and high-gravity fermentations. Its boiling