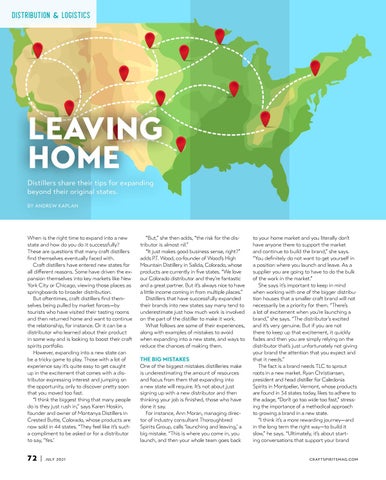 LEAVING HOME Distillers share their tips for expanding beyond their original states. BY ANDREW KAPLAN

When is the right time to expand into a new state and how do you do it successfully? These are questions that many craft distillers find themselves eventually faced with. Craft distillers have entered new states for all different reasons. Some have driven the expansion themselves into key markets like New York City or Chicago, viewing those places as springboards to broader distribution. But oftentimes, craft distillers find themselves being pulled by market forces—by tourists who have visited their tasting rooms and then returned home and want to continue the relationship, for instance. Or it can be a distributor who learned about their product in some way and is looking to boost their craft spirits portfolio. However, expanding into a new state can be a tricky game to play. Those with a lot of experience say it’s quite easy to get caught up in the excitement that comes with a distributor expressing interest and jumping on the opportunity, only to discover pretty soon that you moved too fast. “I think the biggest thing that many people do is they just rush in,” says Karen Hoskin, founder and owner of Montanya Distillers in Crested Butte, Colorado, whose products are now sold in 44 states. “They feel like it’s such a compliment to be asked or for a distributor to say, ‘Yes.’

“But,” she then adds, “the risk for the distributor is almost nil.” “It just makes good business sense, right?” adds P.T. Wood, co-founder of Wood’s High Mountain Distillery in Salida, Colorado, whose products are currently in five states. “We love our Colorado distributor and they’re fantastic and a great partner. But it’s always nice to have a little income coming in from multiple places.” Distillers that have successfully expanded their brands into new states say many tend to underestimate just how much work is involved on the part of the distiller to make it work. What follows are some of their experiences, along with examples of mistakes to avoid when expanding into a new state, and ways to reduce the chances of making them. THE BIG MISTAKES One of the biggest mistakes distilleries make is underestimating the amount of resources and focus from them that expanding into a new state will require. It’s not about just signing up with a new distributor and then thinking your job is finished, those who have done it say. For instance, Ann Moran, managing director of industry consultant Thoroughbred Spirits Group, calls ‘launching and leaving,’ a big mistake. “This is where you come in, you launch, and then your whole team goes back

to your home market and you literally don’t have anyone there to support the market and continue to build the brand,” she says. “You definitely do not want to get yourself in a position where you launch and leave. As a supplier you are going to have to do the bulk of the work in the market.” She says it’s important to keep in mind when working with one of the bigger distribution houses that a smaller craft brand will not necessarily be a priority for them. “There’s a lot of excitement when you’re launching a brand,” she says. “The distributor’s excited and it’s very genuine. But if you are not there to keep up that excitement, it quickly fades and then you are simply relying on the distributor that’s just unfortunately not giving your brand the attention that you expect and that it needs.” The fact is a brand needs TLC to sprout roots in a new market. Ryan Christiansen, president and head distiller for Caledonia Spirits in Montpelier, Vermont, whose products are found in 34 states today, likes to adhere to the adage, “Don’t go too wide too fast,” stressing the importance of a methodical approach to growing a brand in a new state. “I think it’s a more rewarding journey—and in the long term the right way—to build it slow,” he says. “Ultimately, it’s about starting conversations that support your brand