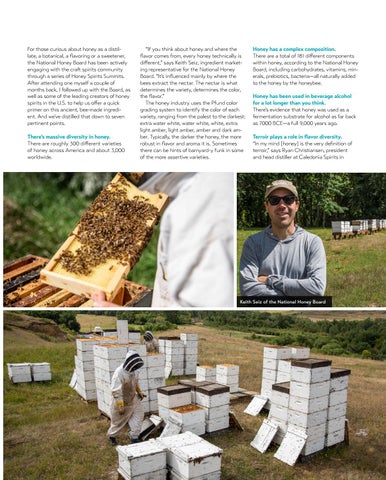 For those curious about honey as a distillate, a botanical, a flavoring or a sweetener, the National Honey Board has been actively engaging with the craft spirits community through a series of Honey Spirits Summits. After attending one myself a couple of months back, I followed up with the Board, as well as some of the leading creators of honey spirits in the U.S. to help us offer a quick primer on this ancient, bee-made ingredient. And we’ve distilled that down to seven pertinent points. There’s massive diversity in honey. There are roughly 300 different varieties of honey across America and about 3,000 worldwide.

“If you think about honey and where the flavor comes from, every honey technically is different,” says Keith Seiz, ingredient marketing representative for the National Honey Board. “It’s influenced mainly by where the bees extract the nectar. The nectar is what determines the variety, determines the color, the flavor.” The honey industry uses the Pfund color grading system to identify the color of each variety, ranging from the palest to the darkest: extra water white, water white, white, extra light amber, light amber, amber and dark amber. Typically, the darker the honey, the more robust in flavor and aroma it is. Sometimes there can be hints of barnyard-y funk in some of the more assertive varieties.

Honey has a complex composition. There are a total of 181 different components within honey, according to the National Honey Board, including carbohydrates, vitamins, minerals, prebiotics, bacteria—all naturally added to the honey by the honeybee. Honey has been used in beverage alcohol for a lot longer than you think. There’s evidence that honey was used as a fermentation substrate for alcohol as far back as 7000 BCE—a full 9,000 years ago. Terroir plays a role in flavor diversity. “In my mind [honey] is the very definition of terroir,” says Ryan Christiansen, president and head distiller at Caledonia Spirits in

Keith Seiz of the National Honey Board