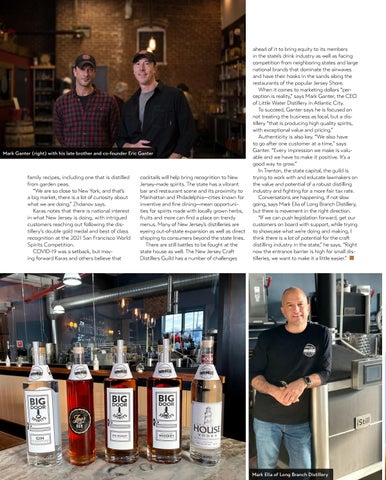 family recipes, including one that is distilled from garden peas. “We are so close to New York, and that’s a big market, there is a lot of curiosity about what we are doing,” Zhdanov says. Karas notes that there is national interest in what New Jersey is doing, with intrigued customers reaching out following the distillery’s double gold medal and best of class recognition at the 2021 San Francisco World Spirits Competition. COVID-19 was a setback, but moving forward Karas and others believe that

cocktails will help bring recognition to New Jersey-made spirits. The state has a vibrant bar and restaurant scene and its proximity to Manhattan and Philadelphia—cities known for inventive and fine dining—mean opportunities for spirits made with locally grown herbs, fruits and more can find a place on trendy menus. Many of New Jersey’s distilleries are eyeing out-of-state expansion as well as direct shipping to consumers beyond the state lines. There are still battles to be fought at the state house as well. The New Jersey Craft Distillers Guild has a number of challenges

ahead of it to bring equity to its members in the state’s drink industry as well as facing competition from neighboring states and large national brands that dominate the airwaves and have their hooks in the sands along the restaurants of the popular Jersey Shore. When it comes to marketing dollars “perception is reality,” says Mark Ganter, the CEO of Little Water Distillery in Atlantic City. To succeed, Ganter says he is focused on not treating the business as local, but a distillery “that is producing high quality spirits, with exceptional value and pricing.” Authenticity is also key. “We also have to go after one customer at a time,” says Ganter. “Every impression we make is valuable and we have to make it positive. It’s a good way to grow.” In Trenton, the state capital, the guild is trying to work with and educate lawmakers on the value and potential of a robust distilling industry and fighting for a more fair tax rate. Conversations are happening, if not slow going, says Mark Elia of Long Branch Distillery, but there is movement in the right direction. “If we can push legislation forward, get our customers on board with support, while trying to showcase what we’re doing and making, I think there is a lot of potential for the craft distilling industry in the state,” he says. “Right now the entrance barrier is high for small distilleries, we want to make it a little easier.” ■