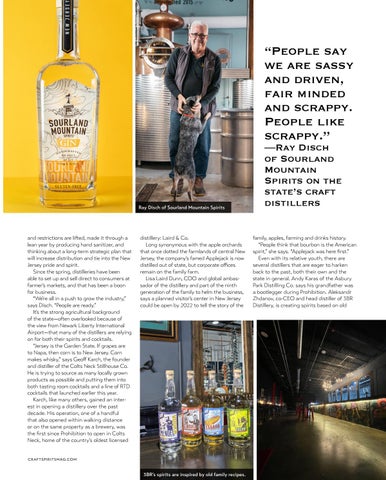 “People say we are sassy and driven, fair minded and scrappy. People like scrappy.”

and restrictions are lifted, made it through a lean year by producing hand sanitizer, and thinking about a long-term strategic plan that will increase distribution and tie into the New Jersey pride and spirit. Since the spring, distilleries have been able to set up and sell direct to consumers at farmer’s markets, and that has been a boon for business. “We’re all in a push to grow the industry,” says Disch. “People are ready.” It’s the strong agricultural background of the state—often overlooked because of the view from Newark Liberty International Airport—that many of the distillers are relying on for both their spirits and cocktails. “Jersey is the Garden State. If grapes are to Napa, then corn is to New Jersey. Corn makes whisky,” says Geoff Karch, the founder and distiller of the Colts Neck Stillhouse Co. He is trying to source as many locally grown products as possible and putting them into both tasting room cocktails and a line of RTD cocktails that launched earlier this year. Karch, like many others, gained an interest in opening a distillery over the past decade. His operation, one of a handful that also opened within walking distance or on the same property as a brewery, was the first since Prohibition to open in Colts Neck, home of the country’s oldest licensed

distillery: Laird &amp; Co. Long synonymous with the apple orchards that once dotted the farmlands of central New Jersey, the company’s famed Applejack is now distilled out of state, but corporate offices remain on the family farm. Lisa Laird Dunn, COO and global ambassador of the distillery and part of the ninth generation of the family to helm the business, says a planned visitor’s center in New Jersey could be open by 2022 to tell the story of the

family, apples, farming and drinks history. “People think that bourbon is the American spirit,” she says. “Applejack was here first.” Even with its relative youth, there are several distillers that are eager to harken back to the past, both their own and the state in general. Andy Karas of the Asbury Park Distilling Co. says his grandfather was a bootlegger during Prohibition. Aleksandr Zhdanov, co-CEO and head distiller of 3BR Distillery, is creating spirits based on old