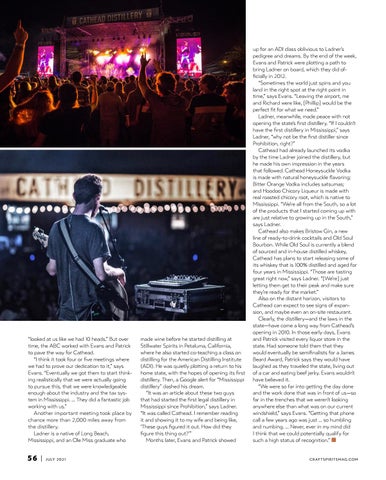 “looked at us like we had 10 heads.” But over time, the ABC worked with Evans and Patrick to pave the way for Cathead. “I think it took four or five meetings where we had to prove our dedication to it,” says Evans. “Eventually we got them to start thinking realistically that we were actually going to pursue this, that we were knowledgeable enough about the industry and the tax system in Mississippi. … They did a fantastic job working with us.” Another important meeting took place by chance more than 2,000 miles away from the distillery. Ladner is a native of Long Beach, Mississippi, and an Ole Miss graduate who

made wine before he started distilling at Stillwater Spirits in Petaluma, California, where he also started co-teaching a class on distilling for the American Distilling Institute (ADI). He was quietly plotting a return to his home state, with the hopes of opening its first distillery. Then, a Google alert for “Mississippi distillery” dashed his dream. “It was an article about these two guys that had started the first legal distillery in Mississippi since Prohibition,” says Ladner. “It was called Cathead. I remember reading it and showing it to my wife and being like, ‘These guys figured it out. How did they figure this thing out?’” Months later, Evans and Patrick showed

up for an ADI class oblivious to Ladner’s pedigree and dreams. By the end of the week, Evans and Patrick were plotting a path to bring Ladner on board, which they did officially in 2012. “Sometimes the world just spins and you land in the right spot at the right point in time,” says Evans. “Leaving the airport, me and Richard were like, [Phillip] would be the perfect fit for what we need.” Ladner, meanwhile, made peace with not opening the state’s first distillery. “If I couldn’t have the first distillery in Mississippi,” says Ladner, “why not be the first distiller since Prohibition, right?” Cathead had already launched its vodka by the time Ladner joined the distillery, but he made his own impression in the years that followed. Cathead Honeysuckle Vodka is made with natural honeysuckle flavoring; Bitter Orange Vodka includes satsumas; and Hoodoo Chicory Liqueur is made with real roasted chicory root, which is native to Mississippi. “We’re all from the South, so a lot of the products that I started coming up with are just relative to growing up in the South,” says Ladner. Cathead also makes Bristow Gin, a new line of ready-to-drink cocktails and Old Soul Bourbon. While Old Soul is currently a blend of sourced and in-house distilled whiskey, Cathead has plans to start releasing some of its whiskey that is 100% distilled and aged for four years in Mississippi. “Those are tasting great right now,” says Ladner. “[We’re] just letting them get to their peak and make sure they’re ready for the market.” Also on the distant horizon, visitors to Cathead can expect to see signs of expansion, and maybe even an on-site restaurant. Clearly, the distillery—and the laws in the state—have come a long way from Cathead’s opening in 2010. In those early days, Evans and Patrick visited every liquor store in the state. Had someone told them that they would eventually be semifinalists for a James Beard Award, Patrick says they would have laughed as they traveled the state, living out of a car and eating beef jerky. Evans wouldn’t have believed it. “We were so far into getting the day done and the work done that was in front of us—so far in the trenches that we weren’t looking anywhere else than what was on our current windshield,” says Evans. “Getting that phone call a few years ago was just … so humbling and numbing. … Never, ever in my mind did I think that we could potentially qualify for such a high status of recognition.” ■