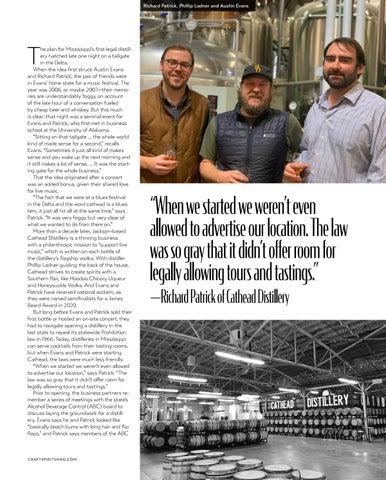 he plan for Mississippi’s first legal distillery hatched late one night on a tailgate in the Delta. When the idea first struck Austin Evans and Richard Patrick, the pair of friends were in Evans’ home state for a music festival. The year was 2006, or maybe 2007—their memories are understandably foggy, on account of the late hour of a conversation fueled by cheap beer and whiskey. But this much is clear: that night was a seminal event for Evans and Patrick, who first met in business school at the University of Alabama. “Sitting on that tailgate … the whole world kind of made sense for a second,” recalls Evans. “Sometimes it just all kind of makes sense and you wake up the next morning and it still makes a lot of sense. … It was the starting gate for the whole business.” That the idea originated after a concert was an added bonus, given their shared love for live music. “The fact that we were at a blues festival in the Delta and the word cathead is a blues tem, it just all hit all at the same time,” says Patrick. “It was very foggy but very clear of what we wanted to do from there on.” More than a decade later, Jackson-based Cathead Distillery is a thriving business with a philanthropic mission to “support live music,” which is written on each bottle of the distillery’s flagship vodka. With distiller Phillip Ladner guiding the back of the house, Cathead strives to create spirits with a Southern flair, like Hoodoo Chicory LIqueur and Honeysuckle Vodka. And Evans and Patrick have received national acclaim, as they were named semifinalists for a James Beard Award in 2020. But long before Evans and Patrick sold their first bottle or hosted an on-site concert, they had to navigate opening a distillery in the last state to repeal its statewide Prohibition law in 1966. Today, distilleries in Mississippi can serve cocktails from their tasting rooms, but when Evans and Patrick were starting Cathead, the laws were much less friendly. “When we started we weren’t even allowed to advertise our location,” says Patrick. “The law was so gray that it didn’t offer room for legally allowing tours and tastings.” Prior to opening, the business partners remember a series of meetings with the state’s Alcohol Beverage Control (ABC) board to discuss laying the groundwork for a distillery. Evans says he and Patrick looked like “basically beach bums with long hair and flip flops,” and Patrick says members of the ABC

“When we started we weren’t even allowed to advertise our location. The law was so gray that it didn’t offer room for legally allowing tours and tastings.” —Richard Patrick of Cathead Distillery