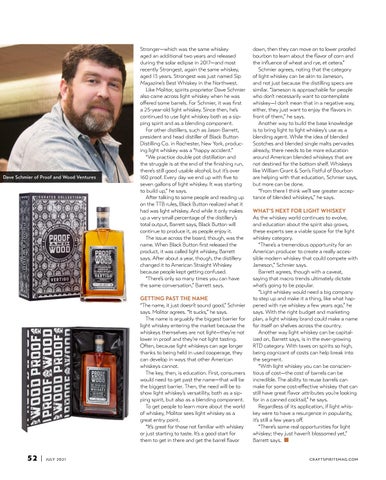 Stronger—which was the same whiskey aged an additional two years and released during the solar eclipse in 2017—and most recently Strongest, again the same whiskey, aged 13 years. Strongest was just named Sip Magazine’s Best Whiskey in the Northwest. Like Molitor, spirits proprietor Dave Schmier also came across light whiskey when he was offered some barrels. For Schmier, it was first a 25-year-old light whiskey. Since then, he’s continued to use light whiskey both as a sipping spirit and as a blending component. For other distillers, such as Jason Barrett, president and head distiller of Black Button Distilling Co. in Rochester, New York, producing light whiskey was a “happy accident.” “We practice double pot distillation and the struggle is at the end of the finishing run, there’s still good usable alcohol, but it’s over 160 proof. Every day we end up with five to seven gallons of light whiskey. It was starting to build up,” he says. After talking to some people and reading up on the TTB rules, Black Button realized what it had was light whiskey. And while it only makes up a very small percentage of the distillery’s total output, Barrett says, Black Button will continue to produce it, as people enjoy it. The issue across the board, though, was the name. When Black Button first released the product, it was called light whiskey, Barrett says. After about a year, though, the distillery changed it to American Straight Whiskey because people kept getting confused. “There’s only so many times you can have the same conversation,” Barrett says. GETTING PAST THE NAME “The name, it just doesn’t sound good,” Schmier says. Molitor agrees. “It sucks,” he says. The name is arguably the biggest barrier for light whiskey entering the market because the whiskeys themselves are not light—they’re not lower in proof and they’re not light tasting. Often, because light whiskeys can age longer thanks to being held in used cooperage, they can develop in ways that other American whiskeys cannot. The key, then, is education. First, consumers would need to get past the name—that will be the biggest barrier. Then, the need will be to show light whiskey’s versatility, both as a sipping spirit, but also as a blending component. To get people to learn more about the world of whiskey, Molitor sees light whiskey as a great entry point. “It’s great for those not familiar with whiskey or just starting to taste. It’s a good start for them to get in there and get the barrel flavor

down, then they can move on to lower proofed bourbon to learn about the flavor of corn and the influence of wheat and rye, et cetera.” Schmier agrees, noting that the category of light whiskey can be akin to Jameson, and not just because the distilling specs are similar. “Jameson is approachable for people who don’t necessarily want to contemplate whiskey—I don’t mean that in a negative way, either, they just want to enjoy the flavors in front of them,” he says. Another way to build the base knowledge is to bring light to light whiskey’s use as a blending agent. While the idea of blended Scotches and blended single malts pervades already, there needs to be more education around American blended whiskeys that are not destined for the bottom shelf. Whiskeys like William Grant & Son’s Fistful of Bourbon are helping with that education, Schmier says, but more can be done. “From there I think we’ll see greater acceptance of blended whiskeys,” he says. WHAT’S NEXT FOR LIGHT WHISKEY As the whiskey world continues to evolve, and education about the spirit also grows, these experts see a viable space for the light whiskey category. “There’s a tremendous opportunity for an American producer to create a really accessible modern whiskey that could compete with Jameson,” Schmier says. Barrett agrees, though with a caveat, saying that macro trends ultimately dictate what’s going to be popular. “Light whiskey would need a big company to step up and make it a thing, like what happened with rye whiskey a few years ago,” he says. With the right budget and marketing plan, a light whiskey brand could make a name for itself on shelves across the country. Another way light whiskey can be capitalized on, Barrett says, is in the ever-growing RTD category. With taxes on spirits so high, being cognizant of costs can help break into the segment. “With light whiskey you can be conscientious of cost—the cost of barrels can be incredible. The ability to reuse barrels can make for some cost-effective whiskey that can still have great flavor attributes you’re looking for in a canned cocktail,” he says. Regardless of its application, if light whiskey were to have a resurgence in popularity, it’s still a few years off. “There’s some real opportunities for light whiskey; they just haven’t blossomed yet,” Barrett says. ■