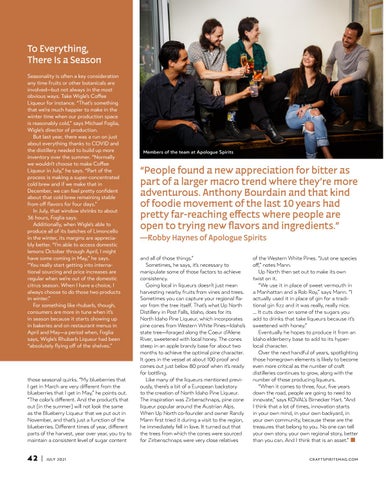 To Everything, There Is a Season Seasonality is often a key consideration any time fruits or other botanicals are involved—but not always in the most obvious ways. Take Wigle’s Coffee Liqueur for instance. “That’s something that we’re much happier to make in the winter time when our production space is reasonably cold,” says Michael Foglia, Wigle’s director of production. But last year, there was a run on just about everything thanks to COVID and the distillery needed to build up more inventory over the summer. “Normally we wouldn’t choose to make Coffee Liqueur in July,” he says. “Part of the process is making a super-concentrated cold brew and if we make that in December, we can feel pretty confident about that cold brew remaining stable from off flavors for four days.” In July, that window shrinks to about 36 hours, Foglia says. Additionally, when Wigle’s able to produce all of its batches of Limoncello in the winter, its margins are appreciably better. “I’m able to access domestic lemons October through April, I might have some coming in May,” he says. “You really start getting into international sourcing and price increases are regular when we’re out of the domestic citrus season. When I have a choice, I always choose to do those two products in winter.” For something like rhubarb, though, consumers are more in tune when it’s in season because it starts showing up in bakeries and on restaurant menus in April and May—a period when, Foglia says, Wigle’s Rhubarb Liqueur had been “absolutely flying off of the shelves.”

those seasonal quirks. “My blueberries that I get in March are very different from the blueberries that I get in May,” he points out. “The color’s different. And the product’s that out [in the summer] will not look the same as the Blueberry Liqueur that we put out in November, and that’s just a function of the blueberries. Different times of year, different parts of the harvest, year over year, you try to maintain a consistent level of sugar content

Members of the team at Apologue Spirits

“People found a new appreciation for bitter as part of a larger macro trend where they’re more adventurous. Anthony Bourdain and that kind of foodie movement of the last 10 years had pretty far-reaching effects where people are open to trying new flavors and ingredients.” —Robby Haynes of Apologue Spirits and all of those things.” Sometimes, he says, it’s necessary to manipulate some of those factors to achieve consistency. Going local in liqueurs doesn’t just mean harvesting nearby fruits from vines and trees. Sometimes you can capture your regional flavor from the tree itself. That’s what Up North Distillery in Post Falls, Idaho, does for its North Idaho Pine Liqueur, which incorporates pine cones from Western White Pines—Idaho’s state tree—foraged along the Coeur d’Alene River, sweetened with local honey. The cones steep in an apple brandy base for about two months to achieve the optimal pine character. It goes in the vessel at about 100 proof and comes out just below 80 proof when it’s ready for bottling. Like many of the liqueurs mentioned previously, there’s a bit of a European backstory to the creation of North Idaho Pine Liqueur. The inspiration was Zirbenschnaps, pine cone liqueur popular around the Austrian Alps. When Up North co-founder and owner Randy Mann first tried it during a visit to the region, he immediately fell in love. It turned out that the trees from which the cones were sourced for Zirbenschnaps were very close relatives

of the Western White Pines. “Just one species off,” notes Mann. Up North then set out to make its own twist on it. “We use it in place of sweet vermouth in a Manhattan and a Rob Roy,” says Mann. “I actually used it in place of gin for a traditional gin fizz and it was really, really nice. … It cuts down on some of the sugars you add to drinks that take liqueurs because it’s sweetened with honey.” Eventually he hopes to produce it from an Idaho elderberry base to add to its hyperlocal character. Over the next handful of years, spotlighting those homegrown elements is likely to become even more critical as the number of craft distilleries continues to grow, along with the number of those producing liqueurs. “When it comes to three, four, five years down the road, people are going to need to innovate,” says KOVAL’s Birnecker Hart. “And I think that a lot of times, innovation starts in your own mind, in your own backyard, in your own community, because these are the treasures that belong to you. No one can tell your own story, your own regional story, better than you can. And I think that is an asset.” n