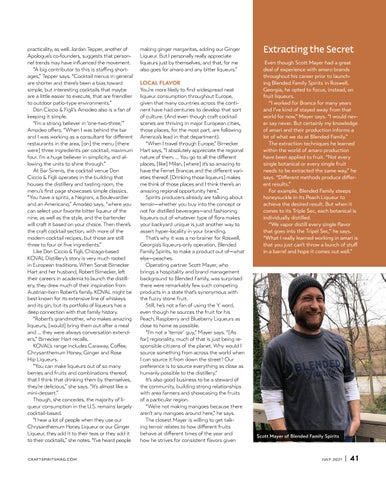 practicality, as well. Jordan Tepper, another of Apologue’s co-founders, suggests that personnel trends may have influenced the movement. “A big contributor to this is staffing shortages,” Tepper says. “Cocktail menus in general are shorter and there’s been a bias toward simple, but interesting cocktails that maybe are a little easier to execute, that are friendlier to outdoor patio-type environments.” Don Ciccio & Figli’s Amodeo also is a fan of keeping it simple. “I’m a strong believer in ‘one-two-three,’” Amodeo offers. “When I was behind the bar and I was working as a consultant for different restaurants in the area, [on] the menu [there were] three ingredients per cocktail, maximum four. I’m a huge believer in simplicity, and allowing the units to shine through.” At Bar Sirenis, the cocktail venue Don Ciccio & Figli operates in the building that houses the distillery and tasting room, the menu’s first page showcases simple classics. “You have a spritz, a Negroni, a Boulevardier and an Americano,” Amodeo says, “where you can select your favorite bitter liqueur of the nine, as well as the style, and the bartender will craft it based on your choice. Then there’s the craft cocktail section, with more of the modern cocktail recipes, but those are still three to four or five ingredients.” Like Don Ciccio & Figli, Chicago-based KOVAL Distillery’s story is very much rooted in European traditions. When Sonat Birnecker Hart and her husband, Robert Birnecker, left their careers in academia to launch the distillery, they drew much of their inspiration from Austrian-born Robert’s family. KOVAL might be best known for its extensive line of whiskeys and its gin, but its portfolio of liqueurs has a deep connection with that family history. “Robert’s grandmother, who makes amazing liqueurs, [would] bring them out after a meal and … they were always conversation extenders,” Birnecker Hart recalls. KOVAL’s range includes Caraway, Coffee, Chrysanthemum Honey, Ginger and Rose Hip Liqueurs. “You can make liqueurs out of so many berries and fruits and combinations thereof, that I think that drinking them by themselves, they’re delicious,” she says. “It’s almost like a mini-dessert.” Though, she concedes, the majority of liqueur consumption in the U.S. remains largely cocktail-based. “I hear a lot of people when they use our Chrysanthemum Honey Liqueur or our Ginger Liqueur, they add it to their teas or they add it to their cocktails,” she notes. “I’ve heard people

making ginger margaritas, adding our Ginger Liqueur. But I personally really appreciate liqueurs just by themselves, and that, for me also goes for amaro and any bitter liqueurs.” LOCAL FLAVOR You’re more likely to find widespread neat liqueur consumption throughout Europe, given that many countries across the continent have had centuries to develop that sort of culture. (And even though craft cocktail scenes are thriving in major European cities, those places, for the most part, are following America’s lead in that department). “When I travel through Europe,” Birnecker Hart says, “I absolutely appreciate the regional nature of them. … You go to all the different places, [like] Milan, [where] it’s so amazing to have the Fernet Brancas and the different varieties thereof. [Drinking those liqueurs] makes me think of those places and I think there’s an amazing regional opportunity here.” Spirits producers already are talking about terroir—whether you buy into the concept or not for distilled beverages—and fashioning liqueurs out of whatever type of flora makes your backyard unique is just another way to assert hyper-locality in your branding. That’s why it was a no-brainer for Roswell, Georgia’s liqueurs-only operation, Blended Family Spirits, to make a product out of—what else—peaches. Operating partner Scott Mayer, who brings a hospitality and brand management background to Blended Family, was surprised there were remarkably few such competing products in a state that’s synonymous with the fuzzy stone fruit. Still, he’s not a fan of using the ‘t’ word, even though he sources the fruit for his Peach, Raspberry and Blueberry Liqueurs as close to home as possible. “I’m not a ‘terroir’ guy,” Mayer says. “[As for] regionality, much of that is just being responsible citizens of the planet. Why would I source something from across the world when I can source it from down the street? Our preference is to source everything as close as humanly possible to the distillery.” It’s also good business to be a steward of the community, building strong relationships with area farmers and showcasing the fruits of a particular region. “We’re not making mangoes because there aren’t any mangoes around here,” he says. The closest Mayer is willing to get talking terroir relates to how different fruits behave at different times of the year and how he strives for consistent flavors given

Extracting the Secret Even though Scott Mayer had a great deal of experience with amaro brands throughout his career prior to launching Blended Family Spirits in Roswell, Georgia, he opted to focus, instead, on fruit liqueurs. “I worked for Branca for many years and I’ve kind of stayed away from that world for now,” Mayer says. “I would never say never. But certainly my knowledge of amari and their production informs a lot of what we do at Blended Family.” The extraction techniques he learned within the world of amaro production have been applied to fruit. “Not every single botanical or every single fruit needs to be extracted the same way,” he says. “Different methods produce different results.” For example, Blended Family steeps honeysuckle in its Peach Liqueur to achieve the desired result. But when it comes to its Triple Sec, each botanical is individually distilled. “We vapor distill every single flavor that goes into the Tripel Sec,” he says. “What I really learned working in amari is that you just can’t throw a bunch of stuff in a barrel and hope it comes out well.”