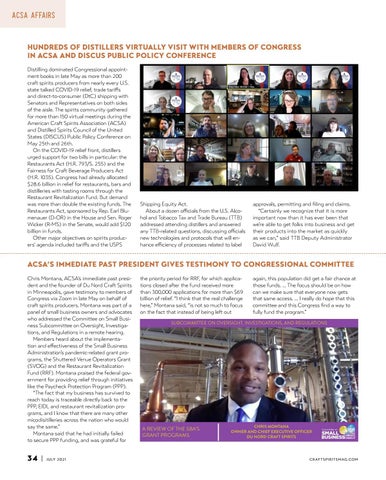 HUNDREDS OF DISTILLERS VIRTUALLY VISIT WITH MEMBERS OF CONGRESS IN ACSA AND DISCUS PUBLIC POLICY CONFERENCE Distilling dominated Congressional appointment books in late May as more than 200 craft spirits producers from nearly every U.S. state talked COVID-19 relief, trade tariffs and direct-to-consumer (DtC) shipping with Senators and Representatives on both sides of the aisle. The spirits community gathered for more than 150 virtual meetings during the American Craft Spirits Association (ACSA) and Distilled Spirits Council of the United States (DISCUS) Public Policy Conference on May 25th and 26th. On the COVID-19 relief front, distillers urged support for two bills in particular: the Restaurants Act (H.R. 793/S. 255) and the Fairness for Craft Beverage Producers Act (H.R. 1035). Congress had already allocated $28.6 billion in relief for restaurants, bars and distilleries with tasting rooms through the Restaurant Revitalization Fund. But demand was more than double the existing funds. The Restaurants Act, sponsored by Rep. Earl Blumenauer (D-OR) in the House and Sen. Roger Wicker (R-MS) in the Senate, would add $120 billion in funds. Other major objectives on spirits producers’ agenda included tariffs and the USPS

Shipping Equity Act. About a dozen officials from the U.S. Alcohol and Tobacco Tax and Trade Bureau (TTB) addressed attending distillers and answered any TTB-related questions, discussing officials new technologies and protocols that will enhance efficiency of processes related to label

approvals, permitting and filing and claims. “Certainly we recognize that it is more important now than it has ever been that we’re able to get folks into business and get their products into the market as quickly as we can,” said TTB Deputy Administrator David Wulf.

ACSA’S IMMEDIATE PAST PRESIDENT GIVES TESTIMONY TO CONGRESSIONAL COMMITTEE Chris Montana, ACSA’s immediate past president and the founder of Du Nord Craft Spirits in Minneapolis, gave testimony to members of Congress via Zoom in late May on behalf of craft spirits producers. Montana was part of a panel of small business owners and advocates who addressed the Committee on Small Business Subcommittee on Oversight, Investigations, and Regulations in a remote hearing. Members heard about the implementation and effectiveness of the Small Business Administration’s pandemic-related grant programs, the Shuttered Venue Operators Grant (SVOG) and the Restaurant Revitalization Fund (RRF). Montana praised the federal government for providing relief through initiatives like the Paycheck Protection Program (PPP). “The fact that my business has survived to reach today is traceable directly back to the PPP, EIDL and restaurant revitalization programs, and I know that there are many other micodisitilleries across the nation who would say the same.” Montana said that he had initially failed to secure PPP funding, and was grateful for

the priority period for RRF, for which applications closed after the fund received more than 300,000 applications for more than $69 billion of relief. “I think that the real challenge here,” Montana said, “is not so much to focus on the fact that instead of being left out

again, this population did get a fair chance at those funds. ... The focus should be on how can we make sure that everyone now gets that same access. … I really do hope that this committee and this Congress find a way to fully fund the program.”