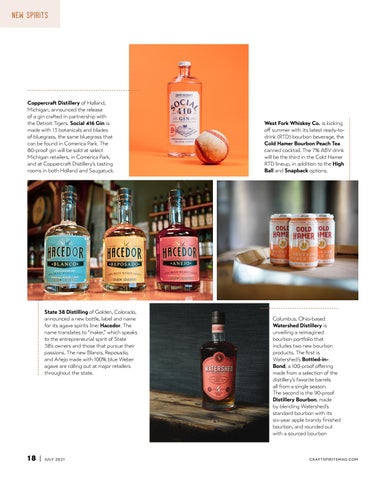 Coppercraft Distillery of Holland, Michigan, announced the release of a gin crafted in partnership with the Detroit Tigers. Social 416 Gin is made with 13 botanicals and blades of bluegrass, the same bluegrass that can be found in Comerica Park. The 80-proof gin will be sold at select Michigan retailers, in Comerica Park, and at Coppercraft Distillery’s tasting rooms in both Holland and Saugatuck.

State 38 Distilling of Golden, Colorado, announced a new bottle, label and name for its agave spirits line: Hacedor. The name translates to “maker,” which speaks to the entrepreneurial spirit of State 38’s owners and those that pursue their passions. The new Blanco, Reposado, and Añejo made with 100% blue Weber agave are rolling out at major retailers throughout the state.

West Fork Whiskey Co. is kicking off summer with its latest ready-todrink (RTD) bourbon beverage, the Cold Hamer Bourbon Peach Tea canned cocktail. The 7% ABV drink will be the third in the Cold Hamer RTD lineup, in addition to the High Ball and Snapback options.

Columbus, Ohio-based Watershed Distillery is unveiling a reimagined bourbon portfolio that includes two new bourbon products. The first is Watershed’s Bottled-inBond, a 100-proof offering made from a selection of the distillery’s favorite barrels all from a single season. The second is the 90-proof Distillery Bourbon, made by blending Watershed’s standard bourbon with its six-year apple brandy finished bourbon, and rounded out with a sourced bourbon