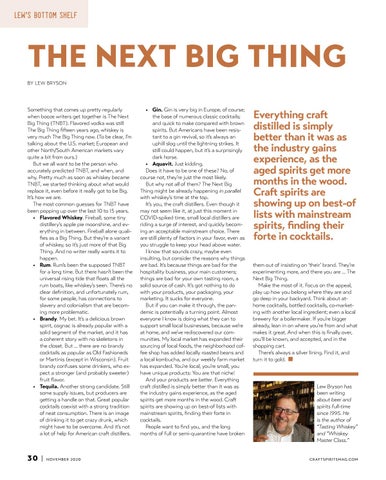 THE NEXT BIG THING BY LEW BRYSON

Something that comes up pretty regularly when booze writers get together is The Next Big Thing (TNBT). Flavored vodka was still The Big Thing fifteen years ago, whiskey is very much The Big Thing now. (To be clear, I’m talking about the U.S. market; European and other North/South American markets vary quite a bit from ours.) But we all want to be the person who accurately predicted TNBT, and when, and why. Pretty much as soon as whiskey became TNBT, we started thinking about what would replace it, even before it really got to be Big. It’s how we are. The most common guesses for TNBT have been popping up over the last 10 to 15 years. • Flavored Whiskey. Fireball, some tiny distillery’s apple pie moonshine, and everything in between. Fireball alone qualifies as a Big Thing. But they’re a variant of whiskey, so it’s just more of that Big Thing. And no writer really wants it to happen. • Rum. Rum’s been the supposed TNBT for a long time. But there hasn’t been the universal rising tide that floats all the rum boats, like whiskey’s seen. There’s no clear definition, and unfortunately rum, for some people, has connections to slavery and colonialism that are becoming more problematic. • Brandy. My bet. It’s a delicious brown spirit, cognac is already popular with a solid segment of the market, and it has a coherent story with no skeletons in the closet. But … there are no brandy cocktails as popular as Old Fashioneds or Martinis (except in Wisconsin). Fruit brandy confuses some drinkers, who expect a stronger (and probably sweeter) fruit flavor. • Tequila. Another strong candidate. Still some supply issues, but producers are getting a handle on that. Great popular cocktails coexist with a strong tradition of neat consumption. There is an image of drinking it to get crazy drunk, which might have to be overcome. And it’s not a lot of help for American craft distillers.

• Gin. Gin is very big in Europe, of course; the base of numerous classic cocktails; and quick to make compared with brown spirits. But Americans have been resistant to a gin revival, so it’s always an uphill slog until the lightning strikes. It still could happen, but it’s a surprisingly dark horse. • Aquavit. Just kidding. Does it have to be one of these? No, of course not, they’re just the most likely. But why not all of them? The Next Big Thing might be already happening in parallel with whiskey’s time at the top. It’s you, the craft distillers. Even though it may not seem like it, at just this moment in COVID-spiked time, small local distillers are riding a surge of interest, and quickly becoming an acceptable mainstream choice. There are still plenty of factors in your favor, even as you struggle to keep your head above water. I know that sounds crazy, maybe even insulting, but consider the reasons why things are bad. It’s because things are bad for the hospitality business, your main customers; things are bad for your own tasting room, a solid source of cash. It’s got nothing to do with your products, your packaging, your marketing. It sucks for everyone. But if you can make it through, the pandemic is potentially a turning point. Almost everyone I know is doing what they can to support small local businesses, because we’re at home, and we’ve rediscovered our communities. My local market has expanded their sourcing of local foods, the neighborhood coffee shop has added locally roasted beans and a local kombucha, and our weekly farm market has expanded. You’re local, you’re small, you have unique products: You are that niche! And your products are better. Everything craft distilled is simply better than it was as the industry gains experience, as the aged spirits get more months in the wood. Craft spirits are showing up on best-of lists with mainstream spirits, finding their forte in cocktails. People want to find you, and the long months of full or semi-quarantine have broken

Everything craft distilled is simply better than it was as the industry gains experience, as the aged spirits get more months in the wood. Craft spirits are showing up on best-of lists with mainstream spirits, finding their forte in cocktails. them out of insisting on ‘their’ brand. They’re experimenting more, and there you are … The Next Big Thing. Make the most of it. Focus on the appeal, play up how you belong where they are and go deep in your backyard. Think about athome cocktails, bottled cocktails, co-marketing with another local ingredient; even a local brewery for a boilermaker. If you’re bigger already, lean in on where you’re from and what makes it great. And when this is finally over, you’ll be known, and accepted, and in the shopping cart. There’s always a silver lining. Find it, and turn it to gold. ■

Lew Bryson has been writing about beer and spirits full-time since 1995. He is the author of “Tasting Whiskey” and “Whiskey Master Class.”