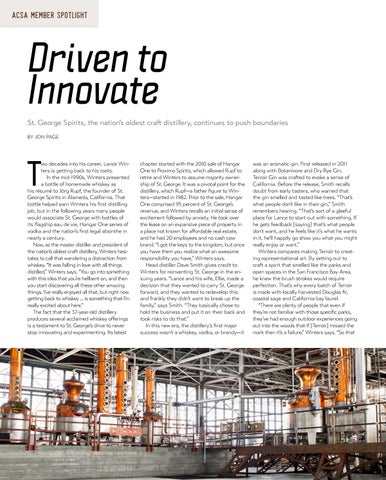 wo decades into his career, Lance Winters is getting back to his roots. In the mid-1990s, Winters presented a bottle of homemade whiskey as his résumé to Jörg Rupf, the founder of St. George Spirits in Alameda, California. That bottle helped earn Winters his first distilling job, but in the following years many people would associate St. George with bottles of its flagship eau de vie, Hangar One series of vodka and the nation’s first legal absinthe in nearly a century. Now, as the master distiller and president of the nation’s oldest craft distillery, Winters hesitates to call that wandering a distraction from whiskey. “It was falling in love with all things distilled,” Winters says. “You go into something with this idea that you’re hellbent on, and then you start discovering all these other amazing things. I’ve really enjoyed all that, but right now getting back to whiskey ... is something that I’m really excited about here.” The fact that the 37-year-old distillery produces several acclaimed whiskey offerings is a testament to St. George’s drive to never stop innovating and experimenting. Its latest

chapter started with the 2010 sale of Hangar One to Proximo Spirits, which allowed Rupf to retire and Winters to assume majority ownership of St. George. It was a pivotal point for the distillery, which Rupf—a father figure to Winters—started in 1982. Prior to the sale, Hangar One comprised 95 percent of St. George’s revenue, and Winters recalls an initial sense of excitement followed by anxiety. He took over the lease on an expansive piece of property in a place not known for affordable real estate, and he had 20 employees and no cash cow brand. “I got the keys to the kingdom, but once you have them you realize what an awesome responsibility you have,” Winters says. Head distiller Dave Smith gives credit to Winters for reinventing St. George in the ensuing years. “Lance and his wife, Ellie, made a decision that they wanted to carry St. George forward, and they wanted to redevelop this and frankly they didn’t want to break up the family,” says Smith. “They basically chose to hold the business and put it on their back and took risks to do that.” In this new era, the distillery’s first major success wasn’t a whiskey, vodka, or brandy—it

was an aromatic gin. First released in 2011 along with Botanivore and Dry Rye Gin, Terroir Gin was crafted to evoke a sense of California. Before the release, Smith recalls doubt from early tasters, who warned that the gin smelled and tasted like trees. “That’s what people don’t like in their gin,” Smith remembers hearing. “That’s sort of a gleeful place for Lance to start out with something. If he gets feedback [saying] that’s what people don’t want, and he feels like it’s what he wants in it, he’ll happily go show you what you might really enjoy or want.” Winters compares making Terroir to creating representational art. By setting out to craft a spirit that smelled like the parks and open spaces in the San Francisco Bay Area, he knew the brush strokes would require perfection. That’s why every batch of Terroir is made with locally harvested Douglas fir, coastal sage and California bay laurel. “There are plenty of people that even if they’re not familiar with those specific parks, they’ve had enough outdoor experiences going out into the woods that if [Terroir] missed the mark then it’s a failure,” Winters says. “So that