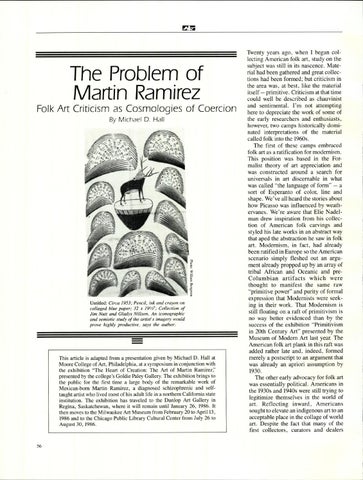 This article is adapted from a presentation given by Michael D. Hall at Moore College of Art,Philadelphia, at a symposium in conjunction with the exhibition &quot;The Heart of Creation: The Art of Martin Ramirez:&#39; presented by the college&#39;s Goldie Paley Gallery. The exhibition brings to the public for the first time a large body of the remarkable work of Mexican-born Martin Ramirez, a diagnosed schizophrenic and selftaught artist who lived most of his adult life in a northern California state institution. The exhibition has traveled to the Dunlop Art Gallery in Regina, Saskatchewan, where it will remain until January 26, 1986. It then moves to the Milwaukee Art Museum from February 20 to April 13, 1986 and to the Chicago Public Library Cultural Center from July 26 to August 30, 1986.

Twenty years ago, when I began collecting American folk art, study on the subject was still in its nascence. Material had been gathered and great collections had been formed; but criticism in the area was, at best, like the material itself â&amp;#x20AC;&amp;#x201D; primitive. Criticism at that time could well be described as chauvinist and sentimental. I&#39;m not attempting here to depreciate the work of some of the early researchers and enthusiasts, however, two camps historically dominated interpretations of the material called folk into the 1960s. The first of these camps embraced folk art as a ratification for modernism. This position was based in the Formalist theory of art appreciation and was constructed around a search for universals in art discernable in what was called &quot;the language of form&quot; â&amp;#x20AC;&amp;#x201D; a sort of Esperanto of color, line and shape. We&#39;ve all heard the stories about how Picasso was influenced by weathervanes. We&#39;re aware that Elie Nadelman drew inspiration from his collection of American folk carvings and styled his late works in an abstract way that aped the abstraction he saw in folk art. Modernism, in fact, had already been ratified in Europe so the American scenario simply fleshed out an argument already propped up by an array of tribal African and Oceanic and preColumbian artifacts which were thought to manifest the same raw &quot;primitive power&quot; and purity of formal expression that Modernists were seeking in their work. That Modernism is still floating on a raft of primitivism is no way better evidenced than by the success of the exhibition &quot;Primitivism in 20th Century Art&quot; presented by the Museum of Modern Art last year. The American folk art plank in this raft was added rather late and, indeed, formed merely a postscript to an argument that was already an apriori assumption by 1930. The other early advocacy for folk art was essentially political. Americans in the 1930s and 1940s were still trying to legitimize themselves in the world of art. Reflecting inward, Americans sought to elevate an indigenous art to an acceptable place in the collage of world art. Despite the fact that many of the first collectors, curators and dealers 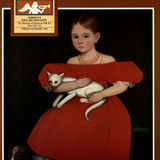