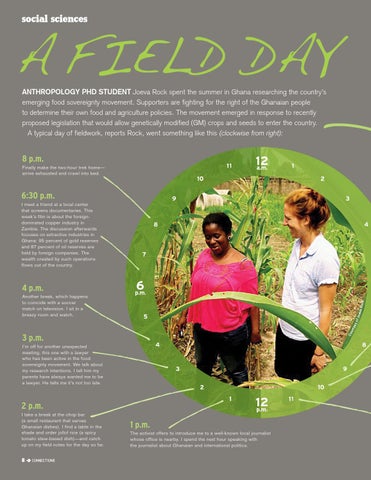 ANTHROPOLOGY PHD STUDENT Joeva Rock spent the summer in Ghana researching the country’s emerging food sovereignty movement. Supporters are fighting for the right of the Ghanaian people to determine their own food and agriculture policies. The movement emerged in response to recently proposed legislation that would allow genetically modified (GM) crops and seeds to enter the country. A typical day of fieldwork, reports Rock, went something like this (clockwise from right):

6:30 p.m. I meet a friend at a local center that screens documentaries. This week’s film is about the foreigndominated copper industry in Zambia. The discussion afterwards focuses on extractive industries in Ghana: 95 percent of gold reserves and 87 percent of oil reserves are held by foreign companies. The wealth created by such operations flows out of the country.

Another break, which happens to coincide with a soccer match on television. I sit in a breezy room and watch.

3 p.m. I’m off for another unexpected meeting, this one with a lawyer who has been active in the food sovereignty movement. We talk about my research intentions. I tell him my parents have always wanted me to be a lawyer. He tells me it’s not too late.

2 p.m. I take a break at the chop bar (a small restaurant that serves Ghanaian dishes). I find a table in the shade and order jollof rice (a spicy tomato stew-based dish)—and catch up on my field notes for the day so far. 8

1 p.m. The activist offers to introduce me to a well-known local journalist whose office is nearby. I spend the next hour speaking with the journalist about Ghanaian and international politics.