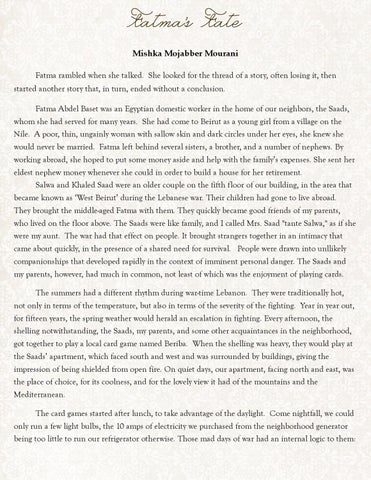 Fatma’s Fate Mishka Mojabber Mourani Fatma rambled when she talked. She looked for the thread of a story, often losing it, then started another story that, in turn, ended without a conclusion. Fatma Abdel Baset was an Egyptian domestic worker in the home of our neighbors, the Saads, whom she had served for many years. She had come to Beirut as a young girl from a village on the Nile. A poor, thin, ungainly woman with sallow skin and dark circles under her eyes, she knew she would never be married. Fatma left behind several sisters, a brother, and a number of nephews. By working abroad, she hoped to put some money aside and help with the family’s expenses. She sent her eldest nephew money whenever she could in order to build a house for her retirement. Salwa and Khaled Saad were an older couple on the fifth floor of our building, in the area that became known as ‘West Beirut’ during the Lebanese war. Their children had gone to live abroad. They brought the middle-aged Fatma with them. They quickly became good friends of my parents, who lived on the floor above. The Saads were like family, and I called Mrs. Saad "tante Salwa," as if she were my aunt. The war had that effect on people. It brought strangers together in an intimacy that came about quickly, in the presence of a shared need for survival. People were drawn into unllikely companionships that developed rapidly in the context of imminent personal danger. The Saads and my parents, however, had much in common, not least of which was the enjoyment of playing cards. The summers had a different rhythm during war-time Lebanon. They were traditionally hot, not only in terms of the temperature, but also in terms of the severity of the fighting. Year in year out, for fifteen years, the spring weather would herald an escalation in fighting. Every afternoon, the shelling notwithstanding, the Saads, my parents, and some other acquaintances in the neighborhood, got together to play a local card game named Beriba. When the shelling was heavy, they would play at the Saads’ apartment, which faced south and west and was surrounded by buildings, giving the impression of being shielded from open fire. On quiet days, our apartment, facing north and east, was the place of choice, for its coolness, and for the lovely view it had of the mountains and the Mediterranean. The card games started after lunch, to take advantage of the daylight. Come nightfall, we could only run a few light bulbs, the 10 amps of electricity we purchased from the neighborhood generator being too little to run our refrigerator otherwise. Those mad days of war had an internal logic to them: 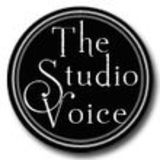 The Studio Voice is an online literary journal weaving story and inspiration, poetry and art with the strong thread of personal connection....

The Studio Voice is an online literary journal weaving story and inspiration, poetry and art with the strong thread of personal connection....