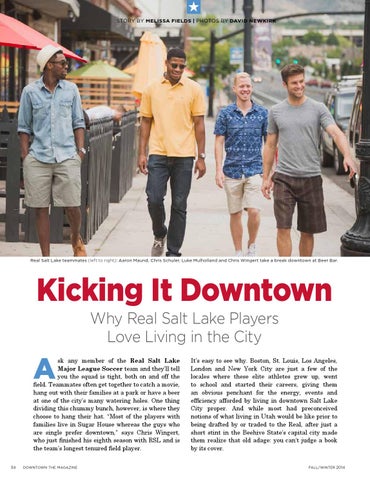 sk any member of the Real Salt Lake Major League Soccer team and they’ll tell you the squad is tight, both on and off the field. Teammates often get together to catch a movie, hang out with their families at a park or have a beer at one of the city’s many watering holes. One thing dividing this chummy bunch, however, is where they choose to hang their hat. “Most of the players with families live in Sugar House whereas the guys who are single prefer downtown,” says Chris Wingert, who just finished his eighth season with RSL and is the team’s longest tenured field player. 34

It’s easy to see why. Boston, St. Louis, Los Angeles, London and New York City are just a few of the locales where these elite athletes grew up, went to school and started their careers, giving them an obvious penchant for the energy, events and efficiency afforded by living in downtown Salt Lake City proper. And while most had preconceived notions of what living in Utah would be like prior to being drafted by or traded to the Real, after just a short stint in the Beehive State’s capital city made them realize that old adage: you can’t judge a book by its cover. fall / winter 2014