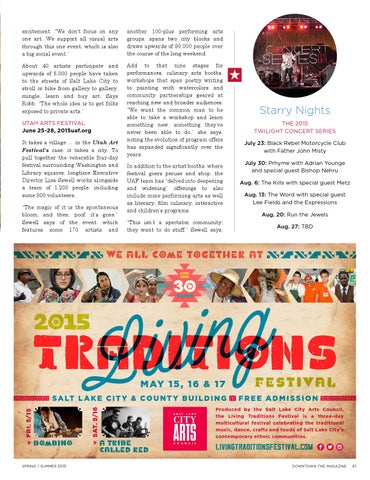 excitement. “We don’t focus on any one art. We support all visual arts through this one event, which is also a big social event.”

another 100-plus performing arts groups, spans two city blocks and draws upwards of 90,000 people over the course of the long weekend.

About 40 artists participate and upwards of 5,000 people have taken to the streets of Salt Lake City to stroll or bike from gallery to gallery, mingle, learn and buy art. Says Robb, “The whole idea is to get folks exposed to private arts.”

Add to that nine stages for performances, culinary arts booths, workshops that span poetry writing to painting with watercolors and community partnerships geared at reaching new and broader audiences. “We want the common man to be able to take a workshop and learn something new, something they’ve never been able to do,” she says, noting the evolution of program offers has expanded significantly over the years.

UTAH ARTS FESTIVAL June 25-28, 2015uaf.org It takes a village … in the Utah Art Festival’s case, it takes a city. To pull together the venerable four-day festival surrounding Washington and Library squares, longtime Executive Director Lisa Sewell works alongside a team of 1,200 people, including some 900 volunteers. “The magic of it is the spontaneous bloom, and then, poof, it’s gone,” Sewell says of the event, which features some 170 artists and

In addition to the artist booths, where festival goers peruse and shop, the UAF team has “delved into deepening and widening” offerings to also include more performing arts as well as literary, film culinary, interactive and children’s programs.

“This isn’t a spectator community; they want to do stuff,” Sewell says,