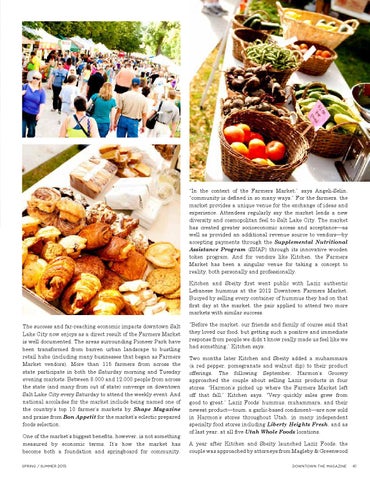 “In the context of the Farmers Market,” says Angeli-Selin, “community is defined in so many ways.” For the farmers, the market provides a unique venue for the exchange of ideas and experience. Attendees regularly say the market lends a new diversity and cosmopolitan feel to Salt Lake City. The market has created greater socioeconomic access and acceptance—as well as provided an additional revenue source to vendors—by accepting payments through the Supplemental Nutritional Assistance Program (SNAP) through its innovative wooden token program. And for vendors like Kitchen, the Farmers Market has been a singular venue for taking a concept to reality, both personally and professionally. Kitchen and Sbeity first went public with Laziz authentic Lebanese hummus at the 2012 Downtown Farmers Market. Buoyed by selling every container of hummus they had on that first day at the market, the pair applied to attend two more markets with similar success. The success and far-reaching economic impacts downtown Salt Lake City now enjoys as a direct result of the Farmers Market is well documented. The areas surrounding Pioneer Park have been transformed from barren urban landscape to bustling retail hubs (including many businesses that began as Farmers Market vendors). More than 115 farmers from across the state participate in both the Saturday morning and Tuesday evening markets. Between 8,000 and 12,000 people from across the state (and many from out of state) converge on downtown Salt Lake City every Saturday to attend the weekly event. And national accolades for the market include being named one of the country’s top 10 farmer’s markets by Shape Magazine and praise from Bon Appetit for the market’s eclectic prepared foods selection. One of the market’s biggest benefits, however, is not something measured by economic terms. It’s how the market has become both a foundation and springboard for community. spring / summer 2015

“Before the market, our friends and family of course said that they loved our food, but getting such a positive and immediate response from people we didn’t know really made us feel like we had something,” Kitchen says. Two months later Kitchen and Sbeity added a muhammara (a red pepper, pomegranate and walnut dip) to their product offerings. The following September, Harmon’s Grocery approached the couple about selling Laziz products in four stores. “Harmon’s picked up where the Farmers Market left off that fall,” Kitchen says. “Very quickly sales grew from good to great.” Laziz Foods’ hummus, muhammara, and their newest product—toum, a garlic-based condiment—are now sold in Harmon’s stores throughout Utah, in many independent specialty food stores including Liberty Heights Fresh, and as of last year, at all five Utah Whole Foods locations. A year after Kitchen and Sbeity launched Laziz Foods, the couple was approached by attorneys from Magleby & Greenwood downtown the magazine