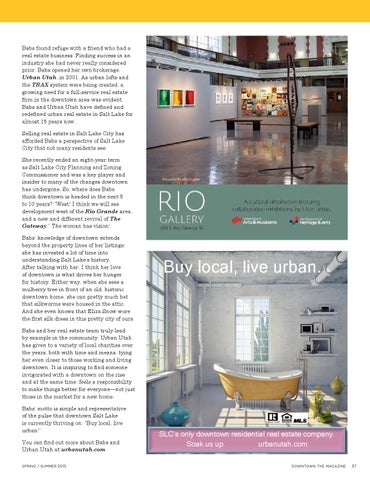 Babs found refuge with a friend who had a real estate business. Finding success in an industry she had never really considered prior, Babs opened her own brokerage, Urban Utah, in 2001. As urban lofts and the TRAX system were being created, a growing need for a full-service real estate firm in the downtown area was evident. Babs and Urban Utah have defined and redefined urban real estate in Salt Lake for almost 15 years now. Selling real estate in Salt Lake City has afforded Babs a perspective of Salt Lake City that not many residents see: She recently ended an eight-year term as Salt Lake City Planning and Zoning Commissioner and was a key player and insider to many of the changes downtown has undergone. So, where does Babs think downtown is headed in the next 5 to 10 years? “West! I think we will see development west of the Rio Grande area, and a new and different revival of The Gateway.” The woman has vision! Babs’ knowledge of downtown extends beyond the property lines of her listings; she has invested a lot of time into understanding Salt Lake’s history. After talking with her, I think her love of downtown is what drives her hunger for history. Either way, when she sees a mulberry tree in front of an old, historic downtown home, she can pretty much bet that silkworms were housed in the attic. And she even knows that Eliza Snow wore the first silk dress in this pretty city of ours.

Babs and her real estate team truly lead by example in the community. Urban Utah has given to a variety of local charities over the years, both with time and means, tying her even closer to those working and living downtown. It is inspiring to find someone invigorated with a downtown on the rise and at the same time, feels a responsibility to make things better for everyone—not just those in the market for a new home. Babs’ motto is simple and representative of the pulse that downtown Salt Lake is currently thriving on: “Buy local, live urban!” You can find out more about Babs and Urban Utah at urbanutah.com spring / summer 2015