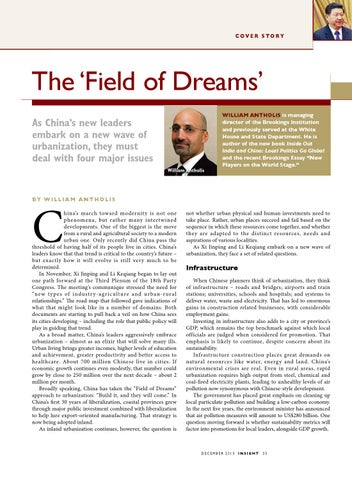 The ‘Field of Dreams’ As China’s new leaders embark on a new wave of urbanization, they must deal with four major issues William Antholis

William Antholis is managing director of the Brookings Institution and previously served at the White House and State Department. He is author of the new book Inside Out India and China: Local Politics Go Global and the recent Brookings Essay “New Players on the World Stage.”

hina’s march toward modernity is not one phenomena, but rather many intertwined developments. One of the biggest is the move from a rural and agricultural society to a modern urban one. Only recently did China pass the threshold of having half of its people live in cities. China’s leaders know that that trend is critical to the country’s future – but exactly how it will evolve is still ver y much to be determined. In November, Xi Jinping and Li Keqiang began to lay out one path forward at the Third Plenum of the 18th Party Congress. The meeting’s communique stressed the need for “ne w t y p e s of i ndust r y - ag r i c u ltu re and u r b an - r u r a l relationships.” The road map that followed gave indications of what that might look like in a number of domains. Both documents are starting to pull back a veil on how China sees its cities developing – including the role that public policy will play in guiding that trend. As a broad matter, China’s leaders aggressively embrace urbanization – almost as an elixir that will solve many ills. Urban living brings greater incomes, higher levels of education and achievement, greater productivity and better access to healthcare. About 700 million Chinese live in cities. If economic growth continues even modestly, that number could grow by close to 250 million over the next decade – about 2 million per month. Broadly speaking, China has taken the “Field of Dreams” approach to urbanization: “Build it, and they will come.” In China’s first 30 years of liberalization, coastal provinces grew through major public investment combined with liberalization to help lure export-oriented manufacturing. That strategy is now being adopted inland. As inland urbanization continues, however, the question is

not whether urban physical and human investments need to take place. Rather, urban places succeed and fail based on the sequence in which these resources come together, and whether they are adapted to the distinct resources, needs and aspirations of various localities. As Xi Jinping and Li Keqiang embark on a new wave of urbanization, they face a set of related questions.

Infrastructure When Chinese planners think of urbanization, they think of infrastructure – roads and bridges; airports and train stations; universities, schools and hospitals; and systems to deliver water, waste and electricity. That has led to enormous gains in construction related businesses, with considerable employment gains. Investing in infrastructure also adds to a city or province’s GDP, which remains the top benchmark against which local officials are judged when considered for promotion. That emphasis is likely to continue, despite concern about its sustainability. Infrastructure construction places great demands on natural resources like water, energ y and land. China’s environmental crises are real. Even in rural areas, rapid urbanization requires high output from steel, chemical and coal-fired electricity plants, leading to unhealthy levels of air pollution now synonymous with Chinese-style development. The government has placed great emphasis on cleaning up local particulate pollution and building a low-carbon economy. In the next five years, the environment minister has announced that air pollution measures will amount to US$280 billion. One question moving forward is whether sustainability metrics will factor into promotions for local leaders, alongside GDP growth. 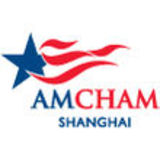 The American Chamber of Commerce in Shanghai

COVER STORY: A Road Map for Reform - China is looking to reenergize economic growth, improve confidence in the Party and liberalize the fina...

COVER STORY: A Road Map for Reform - China is looking to reenergize economic growth, improve confidence in the Party and liberalize the fina...