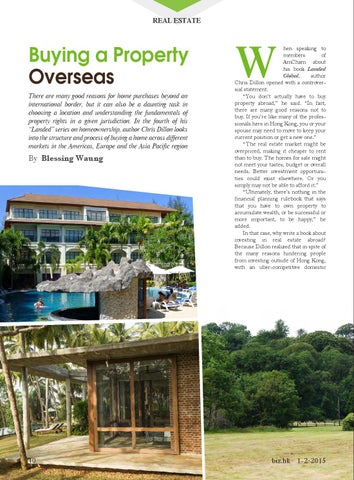 Buying a Property Overseas There are many good reasons for home purchases beyond an international border, but it can also be a daunting task in choosing a location and understanding the fundamentals of property rights in a given jurisdiction. In the fourth of his “Landed” series on homeownership, author Chris Dillon looks into the structure and process of buying a home across different markets in the Americas, Europe and the Asia Pacific region

hen speaking to members of AmCham about his book Landed Global, author Chris Dillon opened with a controversial statement. “You don’t actually have to buy property abroad,” he said. “In fact, there are many good reasons not to buy. If you’re like many of the professionals here in Hong Kong, you or your spouse may need to move to keep your current position or get a new one.” “The real estate market might be overpriced, making it cheaper to rent than to buy. The homes for sale might not meet your tastes, budget or overall needs. Better investment opportunities could exist elsewhere. Or you simply may not be able to afford it.” “Ultimately, there’s nothing in the financial planning rulebook that says that you have to own property to accumulate wealth, or be successful or more important, to be happy,” he added. In that case, why write a book about investing in real estate abroad? Because Dillon realized that in spite of the many reasons hindering people from investing outside of Hong Kong, with an uber-competitive domestic

market and currency fluctuations elsewhere, many would find the pros outweigh the cons.

Investment made easy Through his book, the fourth in his Landed series, Dillon addresses a myriad of “international real estate 101” topics, including basics such as finding agents, lawyers, ownership and property rights and risk factors. Then, he delves much deeper, going so far as to detail into nitty-gritty details such as testing for radon in the soil of properties, repatriating funds, and home automation. “It’s never been easier to buy,” Dillon says. “There’s more information available now on the Internet than ever before, there’re easier ways to get back and forth to your second home with low-cost airlines, and more cities and countries are welcoming foreign immigrants, retirees and investors.” Those realities are reflected in statistics, according to Dillon’s research. 232 million people across the world lived abroad last year, up from 175 million in the year 2000. Additionally, more than 3 million American baby boomers plan to retire abroad.

Thankfully, there are myriad similarities in international housing markets. “If you live in Hong Kong and you buy a home in another common law jurisdiction like England, Canada, Australia, New Zealand, or the United States, many of the legal concepts, ownership structures, and buying processes are going to be familiar.” Likewise, civil law countries such as France, Germany, most of Africa and South America share similarities. Even hybrid systems such as the ones used in Mainland China and Japan have familiar elements, particularly in the way they treat condominiums.

Risk factors However, every real estate market has its own idiosyncrasies to watch out for. Some of them are pleasant, such as the 30-year fixed mortgage rates in the United States, as well as tax-deductible mortgage interests in the US. Others, though, present a “rude shock” to buyers caught unaware. For example, for non-residents who buy a home in Canada and then sell, lawyers must withhold 25 to 50 percent of the sale proceeds until the government is convinced that the seller’s tax bill has been fully settled.

One extreme example that Dillon includes in his book is in South Africa’s Western Cape, where it is “customary for the vendor to provide the purchaser with a certificate that the home is free from borer beetles.” Another idiosyncrasy he cites is in the UK, where homeowners can be liable to maintain the upkeep of their local churches, “under an ancient right known as chancel repair.” 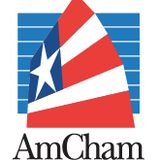 The American Chamber of Commerce in Hong Kong