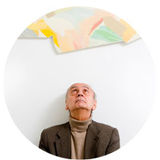 After his studies at the Academies of Milan and Munich, Ambrogio Galbiati devoted himself for several years to the task of reflecting on painting. It was watercolor that gave him the means for this research. In 1977, he arrived in Paris and from 1979 onwards began to produce paintings with a gradual preference for large formats. At the beginning of the 1980’s, the examination and study of the paintings of a prehistoric grotte led him to rethink the terms of his activity. He then developed a particular interest for questions of space in relation to his painting. See, among his studies, the publications indicated on the site. After a period of questionings and studies on the paintings of the past, he took up watercolors again in 2006 and then returned to painting canvases.