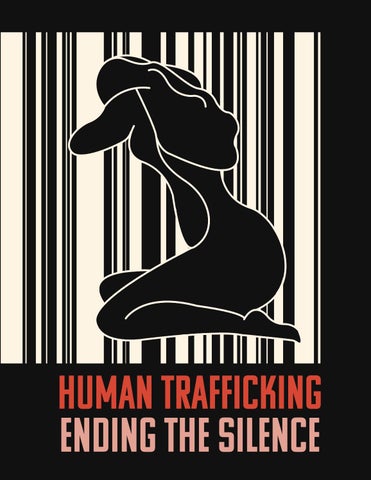 TYPES TYPESOFOFHUMAN HUMANTRAFFICKING TRAFFICKING Human trafficking is a form of exploitation in which people use force, fraud or coercion to take advantage of individuals for profit. The majority of human trafficking falls under the categories of either sexual or labor exploitation. The reality of human trafficking extends beyond the dramatic kidnappings seen in movies. More often it is the suble manipulations of vulnerable individuals that escalate into dangerous, life-threatening conditions. In 2017, the National Human Trafficking Hotline recorded

•In a private home •In a community such as a commune

These charts show the most common forms of exploitation trafficking survivors were subjected to in 2016 by gender. In 2016, 77.5 percent of female victims were trafficked to be exploited in the sex trade.

Trafficking for other purposes

LAND OF THE FREE LAW & POLICY ISSUES The United Statesâ&#x20AC;&#x2122; history intrinsically suggests that systemic racism is pervasive enough to influence even lawmakers on matters of human trafficking. Despite our grim past, there have been many strides made both from state and federal legislators on prosecuting human traffickers to the fullest extent of the law. Here is a brief history and key elements of the issue.

of those prosecuted were then convicted

TVPA was the first federal law to address the trafficking of people. It is now used to compare international compliance to trafficking standards. The act established a three-pronged approach to victims protection: prevention, protection and prosecution.

Before TVPA, public morality laws were mainly enforced by state police forces. Congress justified the move of jurisdiction through enforcement of the Thirteenth Amendment, which abolished slavery and involuntary servitude, and the Commerce Clause, which gives Congress power over interstate commerce. This does not mean trafficking must cross lines, it must only have substantial effect on interstate commerce.

Nations began to meet to form a global consensus regarding international policy on organized crime.

The first of four reauthorizations of TVPA was published. The others were published in 2005, 2008 and 2013.

Survivors can be caught between being viewed as a victim of tra cking under federal law and a prostitute under state law.

Justice for Victims of Trafficking Act (JVTA) JVTA strengthened the services available to victims, including creating a survivor-led U.S. Advisory Council on Human Trafficking. Both the Runaway and Homeless Youth Act and The Child Abuse Prevention and Treatment Act were also amended.

STATES WITH THE HIGHEST REPORTED CASES OF HUMAN TRAFFICKING

The child welfare system was required to improve its response to sex trafficking.

Lack of Education Poor education on human trafficking has led to misguided efforts to stop it. Both the public and professional fields alike often lack the knowledge to recognize the signs of trafficking. A study from Walden University found that the vast majority of the public sees human trafficking as a big issue, however not many believe it receives large amounts of attention.

Schools Many children within the American school system are susceptible to human trafficking, regardless of socioeconomic background. It is vital to expand childrenâ&#x20AC;&#x2122;s education on trafficking to be more thorough and go beyond â&#x20AC;&#x153;stranger dangerâ&#x20AC;?. The adults in the school community must also learn to recognize signs of trafficking and how to respond when they believe students have been implicated in trafficking.

Medical Field Medical professionals are in a position where they could come into contact with human trafficking survivors during their exploitation. Some states have mandated trafficking training for medical credentials, but many still require no such training. Additionally, no trafficking trainings have measured patient outcomes or prevention of trafficking as an outcome. More education is necessary for medical professionals to allow them to recognize patients that are being exploited. Thought HT was an issue in their ED

Is Human trafficking education targeting the Low-Hanging Fruit? Studies have shown that the root of human trafficking isnâ&#x20AC;&#x2122;t kidnapping, coercion, or shady job postings. Itâ&#x20AC;&#x2122;s traumatic childhoods that lead to depression, PTSD, and addiction, which puts people at a far greater risk of being trafficked later in life. Education now, although well-intentioned, is misguided towards a quick fix.

And being a trained Bystander

Recognize that the person in the situation knows their situation best, and it is necessary to honor their requests to ensure their safety. When helping someone, maintain open and non-judgmental communication, ensuring they know they can reach out at any time, and end the call when they need to. Try to speak in person if possible. If that is not possible, try to speak on the phone

that someone is a victim of tra cking

Has poor mental and/or physical health

first. Communicating via text or social media messaging may endanger the victim. Ask if the person is alone, and then use â&#x20AC;&#x153;yes or noâ&#x20AC;? questions until they indicate it is safe to communicate more freely. If they are alone, try to establish safety words: one word to indicate it is safe to talk and that they are alone. This will be helpful for future communications. Additionally, establish a word to indicate it is no longer safe to talk and what the person in the situation would like done. That way you know to cease communication immediately and pssibly contact law enforcement. Try to learn more about their safety concerns, needs and wishes moving forward. Inform them of resources that are available, such as reporting options, shelter, counseling, legal services, etc.

Is not allowed or able to speak for themselves

Shows signs of substance use or addiction

Ways that individuals become victim to trafficking Are you available for a personal assistant job?

If youâ&#x20AC;&#x2122;re interested, kindly send me your mobile # and click on the link below for more details about the job!

Is unpaid, paid very little, paid only through tips, or not paid directly

Employer/Partner denies contact with friends or family or attempts to isolate you from your social network.

framing the issue The representation and framing of human trafficking in the media is important because it has the power to influence public perception, the decisions of policy makers and whether or not those affected seek resources for help. Because of this, it is important for the media to carefully consider how they frame their stories and the sources they choose to use.

A good media report should:

Recognize trafficking As a complex issue

Respect and amplify voices of survivors

“These minors are being abducted, lured, and yanked away from their families. Don't just listen to me. You need to learn about what happened to me and take the blindfold off your eyes.” - Karla Jacinto, Survivor

Not dwell on survivors past

What is framing? Framing is the concept in which the media focuses attention on certain events and places the events within a field of meaning. Framing is an important topic because it influences how the public perceives information and how they interpret it. A few ways in which media shape the frames of their stories is through imagery, word choice and source selection.

Not use images that misrepresent

How is it covered?

was the second lowest category in coverage, even though the affects of health issues due to trafficking has widespread consequences.

was covered in 22 percent of news stories from 2008-12, it is one of the most vital ways trafficking can be stopped.

Dropped 8% As the percent of stories not providing solutions declines, there is an increase in stories naming policy change as the main way to end human trafficking effectively.

Awareness was covered in 1.7 percent of news stories from 2008-12, but it is essential to stop trafficking because in order to enact change, the public must first be aware.

18% of all news stories about tra cking in 2012 used quotes from survivors.

STUDENTS FIGHTING BACK Recent surveys given by The American Freshman Nation Norms have shown the increase in student activism over the years. See how interest has changed over the years.

University organizations Across the United states Students across the nation are spreading awareness about human trafficking. Read their stories here:

Broward Human Trafficking Coalition The Broward Human Trafficking Coalition (BHTC) is a Coalition of individuals from the general public, those who serve it, and all community partners, in Southeast Florida who are individually and collectively committed to working to improve assistance for persons affected by the crime of human trafficking. The mission of the BHTC is to raise awareness about human trafficking. The Coalition serves as an information, education, and networking resource for organizations as well as the community.

Why Us? (Ohio state university) As of 2018, Ohio was ranked No. 4 among the top states for reported cases of human trafficking. Students at the Ohio State University are working to shed light and raise awareness on the issue with the creation of the campus organization Why Us?. The student-led organization aims to spread information and educate their college peers about trafficking-related situations. In March, the group led an anti-human trafficking rally in which two survivors, Elaine Richardson and Barbara Freeman, founder of The Freeman Project, attended as guest speakers.

sstep (SUNY) Coming in behind Ohio at No. 5 is the state of New York. Students at the University at Albany (SUNY) founded the organization SSTEP: Stopping the Trafficking and Exploitation of People, which also encourages students to get involved and educated on the matter. In the groupâ&#x20AC;&#x2122;s first semester, SSTEP drafted a petition to change a New York law dating back to 1929 that allowed children to marry at the age of 14 with parental permission. SSTEP sponsored the petition and received signatures, which was sent to the State Senate and passed into law, increasing the age to 18.

Cases Compared to Other States

Over cases of human trafficking reported in the Carolinas since 2007.

More than of them were trafficked for sexual purposes. More than of these victims are minors. The youngest clients in Project FIGHT are just years old.

Cases Reported in NC This timeline contains statistics from cases reported to the NC Human Trafficking hotline from the year 2012 to 2017. However, there are significantly more calls than reports on file and there is a growing trend in number.

Creating measurement and assessment for acountability

Informing and educating law enforcement personnel, social services providers and the general public The Commission is housed in and staffed by the N.C. Judicial Branch.

2018 NC Statistics Statistics on the types of human trafficking, gender and age of those involved, and if they are citizens of the country.

TAKing LIFE BACK crossing the bridge from a victim to a survivor People might think that once we get trafficked victims out of their situations, theyâ&#x20AC;&#x2122;ll be safe. However, the healing process is far longer and more intense than the original rescue. The impact on survivors may last a lifetime.

Shelter away from Traffickers

I do not choose to identify as a prostitute, but that was what the penal code said I am. Just knowing that the law has labeled me as such played a part in the trauma, and getting past this label is part of the healing.

of respondents reported losing or not receiving employment due to their criminal records.

58% because of the records.

A criminal record, even an arrest without a conviction, often leads to doors being slammed shut. It’sharder to find a job, rent an apart ment, and otherwise rebuild a life after breaking free from a trafficking situation.

Many states have attempt ed to provide relief by giving trafficking victims a path toward having crimi nal records cleared. Unfor tunately, many of the laws don’t work for survivors.

Building Up a Relationship Ending the Silence | 16 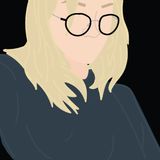 “Ending the Silence” is an infographic magazine about Human Trafficking created as a class project by the students of MEJO 484: “Infographic...

“Ending the Silence” is an infographic magazine about Human Trafficking created as a class project by the students of MEJO 484: “Infographic...