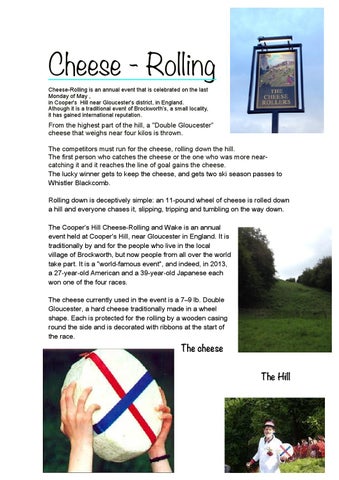 Cheese - Rolling Cheese-Rolling is an annual event that is celebrated on the last Monday of May , in Cooper's Hill near Gloucester's district, in England. Athough it is a traditional event of Brockworth’s, a small locality, it has gained international reputation.

From the highest part of the hill, a "Double Gloucester” cheese that weighs near four kilos is thrown. The competitors must run for the cheese, rolling down the hill. The first person who catches the cheese or the one who was more nearcatching it and it reaches the line of goal gains the cheese. The lucky winner gets to keep the cheese, and gets two ski season passes to Whistler Blackcomb. Rolling down is deceptively simple: an 11-pound wheel of cheese is rolled down a hill and everyone chases it, slipping, tripping and tumbling on the way down. The Cooper's Hill Cheese-Rolling and Wake is an annual event held at Cooper's Hill, near Gloucester in England. It is traditionally by and for the people who live in the local village of Brockworth, but now people from all over the world take part. It is a "world-famous event", and indeed, in 2013, a 27-year-old American and a 39-year-old Japanese each won one of the four races. The cheese currently used in the event is a 7–9 lb. Double Gloucester, a hard cheese traditionally made in a wheel shape. Each is protected for the rolling by a wooden casing round the side and is decorated with ribbons at the start of the race.

The rollers They throw several cheesesâ&#x20AC;Ś

Clearly, after rolling down a hill after a cheese, some people finish with many pains since they break their back, or they break an arm... The falls, injuries and other accidents are very frequent.

SOME CREATURES The dragon: As you know, Wales is a famous country of Celtic culture and traditions. Many Celtic fairy-stories remain there. One of them is the legend of the red dragon. I would like to share it with you. CARDIFF AND

When the Earth was born, there was a black dragon in the underground. It caused many misfortunes, for example, earthquakes, land-slides, and so on. And then, the red dragon appeared as the God of Water. Both dragons got into a battle. After a long time fighting, the red dragon won and the earth seemed to become peaceful. From this story, the red dragon became the symbol of Wales. For example, the red dragon is in the national flag, and the national rugby team of Wales is called the “¨Red Dragon¨. In the end, Welsh people are seen as having "dragon hearts¨. So we can find that one tradition had great influence on the Welsh nation. What an amazing story, I think!

• Who is Nessie? Nessie is a big creature that lives in the Loch Ness in Scotland. The Loch Ness Monster is a cryptic animal that reputedly inhabits Loch Ness, a lake in the Scottish Highlands. It is similar to other supposed lake monsters in Scotland and elsewhere, though its description varies from one account to the next, with most describing it as “large”. Popular interest and belief in the creature's existence has varied since it was first brought to the world's attention in 1933. Evidence of its existence is anecdotal, with minimal and much-disputed photographic material and sonar readings. https://www.youtube.com/watch?v=uvBM6f4zxa0 Here is the original photo of Nessie.

â&#x20AC;˘ The theory Many nessie-maniacs think that Nessie is a dinosaur (a plesiosaurus).

Another theory: some people think that Nessie was an elephant swimming!

In Ireland, hockey, golf, rowing, cricket, rugby union and Olympic target shooting are organised in an all-island basis, with a single team representing the whole of Ireland in international competitions but traditional Irish sports are dominated by Gaelic football and hurling. The gaelic football is the most popular sport in Ireland and the most watched. Huge numbers of women play both sports (the female version of hurling is called camogie). Soccer and rugby are also very popular sports. Soccer in Ireland is played generally to a semi-professional level while rugby has become professional in recent years.

Camoige was invented in Ireland in 1990 and it is a typical Celtic sport. It is similar to Hurling but played by girls. The ball is smaller than the hurling-ball and players are allowed to make body-contact like they are in Hurling. Players in Camoige are allowed to hit an opponent´s stick or hurley.

RULES (SOME OF THEM) • Goalkeepers wear the same colours as outfield players • Camoige players can hand-pass a score • A Camoige game lasts 60 minutes,with 2 parts of 30 minutes • Camoige players must wear skirts or shorts and a helmet Explanations are not enough? • THEN Watch more here: https://youtu.be/9nbJCmoGz8w

Scotland: Introduction Scotland is one of the four nations of the UK, covering one third of its total area; with more than 790 islands, it is surrounded on the north and west by the Atlantic Ocean, on the east by the North Sea, and to the south, the Irish Sea. Scottish population is estimated to be 5.1169 million inhabitants, giving a population density of 65 inhabitants per square kilometre. The capital is Edinburgh, while Glasgow is the largest city and its metropolitan area concentrates 40% of the Scottish population.

Highland Games Scottish hammer throw: this is with your feet in a fixed position, the competitor rotates the hammer over his head and throws it over his shoulder.

Caber toss: the competitor must take in his hands a pine trunk by the narrow end and put it vertically. After running forward to throw it, the top-end hits the ground first.

Stone put: it comes to throwing a stone, the competitor may use any style but always places the stone in one hand and rests it against the neck till the time of thowing it.

Weight throw: The weights are made of metal and have a handle attached directly to a chain. They hurtle using only one hand, but you can use any technique, but usually rotation is used. The competitor who reaches greater distance wins. To us, it seems a very dangerous sport.

Weight over the bar: athletes try to throw a weight of 25.4 kg, which has a handle attached above a horizontal bar, with one hand only. They have three opportunities per level, and if they manage to overcome it, they go to the next round.

Watch here because a video explains these strange sports better!

CELTIC AND SCOTTISH CLOTHES Scottish kilts are becoming very popular in modern culture, in movies such as "Braveheart" and "Rob Roy" and worn in celebrated holidays such as Saint Patrick's Day, The Blessing of the Sea and Saint Stephen's Day. Celtic clothing includes Celtic chemises, Celtic belts, and Celtic dresses.

For Scottish clothing we have Kilts for men, Scottish dresses for women, and leather sporrans (bags). All in a variety of sizes and colours. If you are trying to be a Celtic warrior or a Scottish Highlander for that medieval fair or party, here you can find some inspiration!

CELTIC MUSIC Celtic music is defined as music that originates in the countries of Ireland, Scotland and Wales. Celtic music is best described as a type of folk music with distinctive music and lyrics.

Celtic music can be defined also as music of the Celt people and has been played, sung and danced for several centuries. Some of the common instruments heard in Celtic music include violin, lute, flute, bagpipe, harp and several other commonly heard instruments such as drums, violin.… Celtic music covers various types of music and it is popular for dancing happily as well as for singing as a sad ballad. Celtic music can sound very varied. And, today Celtic music is played and heard not only in Ireland, Scotland and Wales, but also on a worldwide stage. Musicians such as Clannad, Enya, The Chieftains and The Corrs are some of the most famous Celtic musicians of the day. In our country, you can listen to Celtas Cortos, Carlos Nuñez, Hevia and other groups from Galicia and Asturies. Carlos Nuñez and The Chieftains playing flutes and bagpipes. The Corrs and The Chieftains: look what happens when Irish friends get together! Celtas Cortos: La Senda del Tiempo (fenómeno).

CELTIC DANCE The early history of Irish dance reveals a constant shifting of population through migration and invasions. Each of these peoples brought their preferred types of dance and music. When the Celts arrived in Ireland from central Europe over two thousand years ago, they also brought with them their own folk dances. There are only vague references to the early history of Irish dancing, but there is evidence that among its first practitioners were the Druids, who danced in religious rituals honouring the oak tree and the sun. Traces of their circular dances survive in the ring dances of today. Here, you have some links to some videos where you can appreciate the very popular dance-shows. Women moving happy feet, very fast! Two Women play violin, faster and faster.

Lindisfarne is an island with a castle-monastery, located north of Britain. It was the first monastery attacked by the Vikings on June 8th, 793, the date considered as the beginning of the Viking Age in Britain.

Viking history for England After the attack on Lindisfarne in 793, the Vikings continued to attack the English coast.This marked the beginning of a period of violent attacks. The 9th century invasions came not from Norway, but by the Danes from around the entrance to the Baltic .

Viking weapons Their weapons were swords, spears, battle-axes, and bows and arrows. 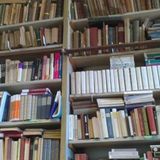