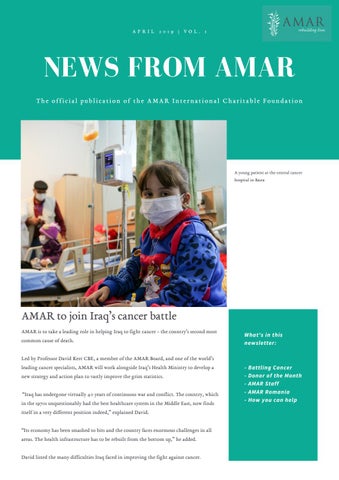 A young patient at the central cancer hospital in Basra

AMAR to join Iraq’s cancer battle AMAR is to take a leading role in helping Iraq to fight cancer - the country’s second most common cause of death.

What's in this newsletter:

Led by Professor David Kerr CBE, a member of the AMAR Board, and one of the world’s leading cancer specialists, AMAR will work alongside Iraq’s Health Ministry to develop a new strategy and action plan to vastly improve the grim statistics. “Iraq has undergone virtually 40 years of continuous war and conflict. The country, which in the 1970s unquestionably had the best healthcare system in the Middle East, now finds itself in a very different position indeed,” explained David. “Its economy has been smashed to bits and the country faces enormous challenges in all areas. The health infrastructure has to be rebuilt from the bottom up,” he added.   David listed the many difficulties Iraq faced in improving the fight against cancer.

He said in the past, there was insufficient

They persuaded Dr Ala Alwan, a World

political priority and funding. This was

Health Organisation Director, to return to

coupled with a limited ability to counter

take the job. At the WHO he was credited

with being one of the first to put non-

communicable diseases on the world

“We in the cancer community should get

disease management. There is a lack of

behind him to support this remarkable

cancer awareness and knowledge amongst

challenge. The idea of creating an

the health workers, and a drastic lack of

essential platform of cancer care that will

diagnostic and treatment capacity within

return the most cost-effective benefits for

the system,” he explained.

the citizens of Iraq at these times of a

diminished economy is quite a challenge.

But I believe that it is one that we should

medicines that are easy to administer and

try to think through and find the

do not require hospitalisation.”

Baroness Nicholson gets a hug from a patient

“Ala's challenge to us as a clinical

Iraqi doctors was the limited data on

community is to learn how we can deliver

cancer incidence and mortality, due to the

a basic platform of cancer care that will

lack of functioning cancer registries and

benefit the citizens of Iraq and is

AMAR has a big part to play in this too. We plan to train our marvellous Women Health Volunteers to respond to the varied needs of the terminally ill.” AMAR’s Chairman, Baroness Nicholson,

However, the professor believes with

To begin with, work with the Iraqi

AMAR’s help Iraq is ready to take on these

Ministry of Health will focus on two areas.

challenges. The government had made a

First, David and his team of AMAR Iraqi

great start, he said, by making a

medical professionals will carry out a drugs

and medicines audit, focusing on the availability and affordability of cancerfighting drugs. Later they will look at introducing palliative care to Iraq. Currently there are no hospices or similar institutions where the terminally ill can be cared for. “We hope to start work as soon as possible on the medicines’ audit.  What is the drugs’ budget, what drugs does Iraq need right away, which specialists do they need for the future? “said David.

believes the charity, with its longestablished record of delivering high-

One of the best Iraq is perfectly placed to help Iraq “vastly ways to get a improve” its record on fighting cancer. clear picture of “Cancer care across the Middle East is your dream particularly poor, due to a huge variety of factors. AMAR will is assist home tothe highly skilled professionals in the region to vastly write down a improve those figures.  In David Kerr, we have thelist ideal leader for this. He is famous of your around the globe and his knowledge and ideal features. skills will be invaluable.” quality, highly skilled medical expertise in

The Baroness added: “This is a major piece of work for AMAR and we will need considerable funding to carry out all that

“Meanwhile, we believe palliative care must be integrated into all Iraqi health Professor David Kerr

and cancer control policies, with a focus on providing care at home.

we plan to do. I appeal once again to all our fantastic supporters to keep those donations coming. The Iraqi people need us more than ever.”

Mitsubishi Corporation helps AMAR to empower women in Basra, Iraq Vast numbers of women in Iraq are unemployed and lack the skills to find

Sanaa is one of these women. She has three

work, especially in Basra, one of the country’s most deprived regions.

children to care for, and signed up for the

Thanks to the generosity of the Mitsubishi Corporation, AMAR has been

IT training course. She said "For me it is

more than just learning basic IT, it helped

unemployed women to help them gain the skills to enter the workforce.

me to be more social, encouraging me to

Over 80% of women in Iraq do not participate in the labour force. There are

develop my life, to organize my time in a

many reasons for this, not least lack of access to training to develop essential

useful way. In addition to that, I now

believe that nothing is so hard in life, as I have willpower. The trainer is very

On top of this, after years of war and violence many women have lost their

supportive, and the life skills training is

husbands and been left alone to care for their children. Without work, they

very helpful in developing my home

are exceptionally vulnerable and struggle to feed and clothe their families.

Thank you to Mitsubishi Corporation for

Corporation Empowerment Women Project, with a focus on widows, to get

them back into work. The training started in September 2018 and covers

confidence and skills to take control of

English language, IT, hairdressing, sewing and design – with a cohort of

their lives. Through this programme, their

ability to support themselves and their families in the future has received an invaluable boost.

A Touch of Frost at AMAR OUR NEW PROJECT MANAGER NICK FROST GIVES HIS FIRST IMPRESSIONS OF LIFE WITH AMAR It’s six months since I joined AMAR, and it’s been non-stop ever since. My job is to coordinate and assist the Iraq team on a crosssection of our life-changing Corporate Social Responsibility (CSR) projects. Having previously worked with several UKbased charities, I was no stranger to the NGO world. However, it’s my first experience working in the international arena. Most people in the UK are very used to the concept of international aid but, for many here, the focus often appears to be on Africa. Initiatives like Comic Relief raise many millions for the continent’s poor and underserved. Meanwhile, I believe the many problems encountered by those living in the Middle East seem to be less well known. In my short time here at AMAR I have learnt so much, not only about the region, but about its wonderful, andoften long-suffering people. AMAR is the leading foreign charity in Iraq, and its projects are vital, varied, valued and comprehensive.  The Women’s Training Centre in Al-Khora, in armat Ali near to Basra is one of the best. The strength and resilience of these women is what amazes me most. It would be so easy, given the social pressures in Iraq, for the majority of them to remain unemployed and to stay confined to the home, struggling to care and support their children. However, what we have found is an unparalleled drive to learn, improve and become selfsufficient. And this isn’t a trend unique to widowed and divorced women, with girls as young as 15 using our centre for selfimprovement too. With support and oversight from the Basra Oil Company (BOC) and Rumaila Operating Organization (ROO), the Community Centre for Women opened its doors in August 2015. Located near to ROO’s armat Ali Water Treatment Plant, the site has classrooms that offer a range of courses, from trade-specific classes such as sewing, design, hairdressing, beauty and craftworks, to lessons in literacy, computer usage and human rights.

"I have seen only a fraction of the amazing things the charity has done for those less fortunate, and I am so excited to be a part of its future."

I collate all the photographs, information and data from the centre, and am privileged to hear the stories of some remarkable women. Al Khora’s centre for women is a fantastic success story. In my short time at AMAR, I have seen only a fraction of the amazing things the charity has done for those less fortunate, and I am so excited to be a part of its future.

Asia said, “The volunteers and

bonds, and the enjoyment and happiness of the children with

AMAR stepped in after the fall of the dictator, Nicolae Ceausescu, to rehabilitate

disabilities, as well as their partners, is

so clear to see.”

orphanages during the regime and remained extremely marginalised. During her time at AMAR, Asia has Its programme unites volunteers in mainstream education with children in special

educational needs schools to foster inclusion. Through joint participation in

of AMAR Romania, so she particularly

activities including dance competitions and festivals, the children with

enjoyed being able to see the impact of

AMAR Romania on the ground.

“The spirit of trust and love that’s

fostered by the programme is really

AMAR works. They were both moved by the impact AMAR is having on the

helping children with disabilities to

build confidence and realise their potential, where otherwise they would remain marginalised.” “I think it’s a great model that should

be rolled out in other countries,” she added.

build confidence and realise their potential, where

otherwise they would remain marginalised.”

Romania expand its life-changing programme, please get in touch.

AMAR Interns Asia and Elvira with volunteers and participants

A first grader Adiza posing for the camera

Enjoying her lesson at one of AMAR Romania's sessions

Facebook Can Produce Many Happy Returns for AMAR There’s a great new way to help AMAR and to raise awareness of what we do to an audience of millions. On their birthday, all Facebook members are offered the chance to raise money for the charity of their choice. AMAR is now registered as an official not-for-profit, so with just a few clicks you can start raising money for us amongst your friends. Facebook even starts you off by donating the first pound and then it’s up to you to persuade your pals that AMAR needs their support. We’d be hugely grateful if you could use Facebook to bring AMAR many happy returns of vital fund-raising cash. https://tcrn.ch/2CYe2wj The first of of our newly designed newsletters

The first of of our newly designed newsletters