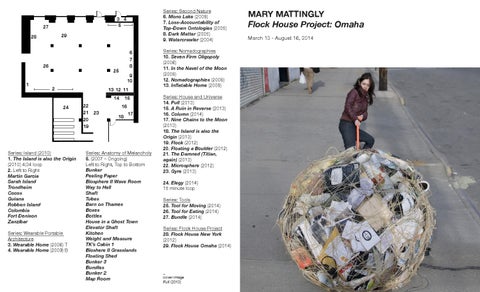 Our dystopian future has its own wistful beauty, a fact that has never been clearer than in the work of New York-based artist Mary Mattingly, whose practice collapses boundaries between performance, sculpture, architecture, and photography. The central project of Mattingly’s time here, Flock House Omaha, is a work in progress— and the way in which it will be completed is an important part of Mattingly’s artistic practice. Over the next several months, Mattingly will offer this space as an active research lab where she can work in partnership with the local community to chart a distinctly Nebraskan understanding about the future of urban space. The fruits of this inquiry will be captured in the fabrication of Flock House Omaha, which will be deployed in the city and occupied by local artists, students, and urbanists of various stripes. Mattingly’s work, visible around the room, does double-duty in this research context. Her art serves its poetic function, suggesting ideas for which there is not yet an adequate vocabulary. In addition, however, the notions, queries, scribbles and fabrications (in both senses of the word) embodied in these objects around you must now provide important raw materials

from which Mattingly and her research partners generate new thinking and fresh insights. In other words, the works in this room are not the end of an idea, but the beginning of many, an invitation to learn by doing. Among these documents of Mattingly’s prior investigations, take a few moments to notice some bodies of work that are notable both for their aesthetic and research value. The Anatomy of Melancholy extends an invitation to conjure in your own mind the narrative past and future of abandoned spaces. Nomadographies creates a window of opportunity to explore the tensions between, and possible fusion of, architecture and migration. House and Universe offers visceral bundles of belongings and memory that also blur the boundaries between documentation and fiction. We encourage you to participate in this process of poetic research and rigorous imagination fully, and to join Mattingly in her series of workshops to envision the shape of Omaha’s future.

About the Artist Mary Mattingly is a New York City-based artist whose work has been supported by the James L. Knight Foundation, Eyebeam Center for Art and Technology, Yale University School of Art, the Harpo Foundation, NYFA, the Jerome Foundation and the Art Matters Foundation, among others. She has been featured in Art in America, Artforum, Dwell, China Business News, The New York Times, New York Magazine, Financial Times, New Yorker, The Wall Street Journal, and the Village Voice. Mattingly’s efforts have also been covered by BBC News, MSNBC, Fox News and on Art 21’s New York Close Up series. The artist merges performance, sculpture, architecture and photography to address issues of home, migration, cartography and living systems. She creates photographs and sculptures that depict future and obscure landscapes, makes wearable sculpture, “wearable homes,” and ecological installations. Her work has been exhibited at the International Center of Photography, the Seoul Art Center, the Bronx Museum of the Arts, the New York Public Library, deCordova Museum and Sculpture Park in Massachusetts and the Palais de Tokyo. Mattingly participated in smARTpower: an initiative between the U.S. Department of State and the Bronx Museum of the Arts as artistambassador to the Philippines. 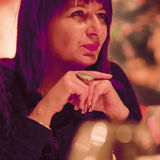