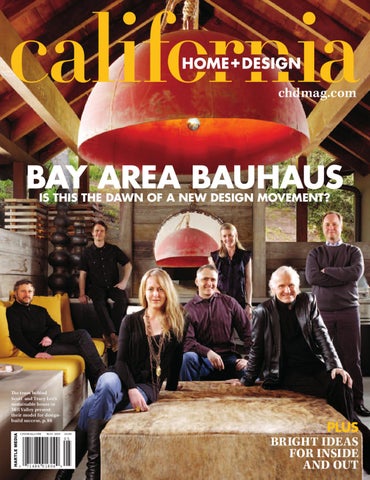 bay area bauhaus is this the dawn of a new design movement?

The team behind Scott and Tracy Leeâ&amp;#x20AC;&amp;#x2122;s sustainable house in Mill Valley present their model for designbuild success, p. 88 chdmag.com

plus bright ideas for inside and out

CONTRIBUTORS Just as the designers donated their services to Santa Monica’s Upward Bound House (“A Room of One’s Own,” p. 58), so did local photographer Laure Joliet, who volunteered to shoot the completed units, finishing all 18 in one day despite the fact that the electricity wasn’t yet hooked up. “We used a lot of extension cords,” Joliet says. “But it was worth it—I really wanted to document the amazing work the designers had done.” Joliet also blogs for Apartment Therapy and Dwell.

reached out to sources around the globe—from the staff at San Francisco’s William Stout Architectural Books to archivists at Cal Poly Pomona to an author in England—for information about Raphael Soriano (“Man of Steel,” p. 120). “I loved digging into his life and career and talking to people who knew him,” says Maduell, who also wrote View (“Baldwin Hills Scenic Overlook,” p. 78) and Trend (“Past, Present, Fuchsia,” p. 44).

When Kenneth Probst saw the work of architectural designer Larissa Sand, the photographer knew he wanted her to help him outfit his San Francisco loft. Fortunately, Sand took a liking to Probst’s work as well, and a deal was brokered. “We traded—I shot a project for her, and she designed some pieces for my loft,” says Probst, who shot her live/work home and metal shop for “A Perfect Weld,” (p. 82). His work has also been in Vanity Fair, The New York Times Magazine and Architectural Record.

images courtesy of the subjects

Photographer Undine Pröhl picked the perfect February day to trek to the top of Los Angeles’ newest public park, Baldwin Hills Scenic Overlook, in order to shoot the trio of buildings designed by Safdie Rabines Architects for this month’s View (p. 78). “The park was full of people. It is really becoming a popular destination in the city,” says Pröhl, a Santa Monica resident. Trained as an architect, she photographs primarily for publications in Italy, France and her native Germany.

Conceived as a birthday gift from a husband to his wife, this one-of-a-kind tree house was designed to be the ultimate backyard getaway. Rockefeller Partners Architects built the retreat to sit astride a fallen—but still living—Aleppo pine overlooking views of downtown Los Angeles. “Since the tree wasn’t a sturdy enough foundation, steel columns were placed at angles over the main branch, creating a metaphoric grove of trees,” says project architect Christopher Kempel. In true tree-house fashion, the studio is made of wood: sustainably harvested ipe and cedar make up the exterior with walnut floors and cabinetry inside. The refuge stays warm with radiant heating and a fireplace. Working within 172 square feet, the designers managed to squeeze a kitchenette and powder room into the studio—and an outdoor shower off to the side. —Angelica Maduell For more design news: chdmag.com

Designers are highlighting both the delicate texture and the brute strength of good old-fashioned rope.

Martin rope Chandelier: Douglas Sterling; all other images courtesy of the manufacturers

FUCHSIA Designers have adapted the hottest hue of fashion’s spring collections for the home, launching timeless pieces into the future. By Angelica Maduell

COURTESY OF THE MANUFACTURERS

if i had a

hammer From the subtly dimpled to the heavily indented, designers show us metal can have more than a mirror finish.

all images courtesy of the manufacturers

When visitors enter the Berkeley Art Museum and Pacific Film Archive, they’ll encounter a 1,550-square-foot sea of orange curves rising up from the concrete floor of the main gallery. Berkeley architect Thom Faulders blurs the line between architecture and art with BAMscape, an interactive installation composed of 150 molded-plywood modules painted bright orange. Blue strips of non-skid tape help visitors find their way to the perfect spot to enjoy the museum’s ramps, skylights and cantilevered galleries from a new, reclining point of view. “The sculpture is like a field of boulders along a river,” says Faulders. “It engages the user in active discovery.” Faulders was commissioned by the museum to create a space that would encourage patrons to socialize and study on the main floor, which is typically used as an area for performance arts. The modules are equipped with plugs for laptops and the museum offers coffee and free Wi-Fi. After 6 p.m. on Fridays, the sculpture— which will be in place until November of next year—becomes a stage for the museum’s latest program, L@TE: Friday Nights, which features artist and curator lectures, musical and spoken-word performances and film screenings. It may be one of the best seats in town. —Angelica Maduell

The people of Los Angeles won a 20-year battle against developers and oil companies to create the city’s largest public park in 100 years, and it’s still a work-in-progress. Baldwin Hills Scenic Overlook is flanked by La Cienega Boulevard to the east and Jefferson Boulevard to the north and provides a sweeping view of the city. It’s where Safdie Rabines Architects of San Diego designed a modern three-building park complex, which includes a visitor center, an outdoor pavilion (shown here) for events and a catering kitchen. Because the 50-acre park was formerly the site of oil drilling, architects Taal Safdie and Ricardo Rabines included major landscape restoration as part of their design plan. When the original vision had to be scaled back because of the budget crisis, the community stepped in, initiating programs at local schools to continue the restoration. Students have created nests for the endangered cactus wren and replaced nonnative and invasive plants with indigenous species. But the fight isn’t over yet. The budget cuts that limited the project now threaten to shut down the park. “Baldwin Hills would suffer from closure more than other state parks, because the park could be overtaken by its urban surroundings,” says Safdie. To learn more about the park and how to help, go to bhc.ca.gov. —Angelica Maduell

Florence Yoch brought a sense of drama to the Southern California landscape—and to the silver screen. BY Angelica Maduell

gardens, you may be surprised by a massing of Pacific Coast lorence Yoch’s gardens will live forever. Not only did she irises or a California sycamore bending over the path.” have a long career as a landscape designer, she created Introduced to Hollywood by her client, film director memorable movie sets throughout Hollywood’s Golden Dorothy Arzner, Yoch began working with set designers. For Age, including the Capulets’ Italian garden for Romeo and the plantation in Gone with the Wind, she rejected sedate beds Juliet (1936), the rice paddies of China for The Good Earth of flowers in favor of rugged hillocks and gnarled trees, giving (1937) and the gardens at Tara for Gone With the Wind (1939). Florence Yoch was born in 1890, in Santa Ana. She gradu- the landscape a personality and strength of its own. Alternating between creating fantasies and easy-toated with a degree in landscape gardening in 1915. In 1925, maintain gardens, Yoch designed more than 250 projects, until she launched her own landscape design company, Yoch and her death in 1972. She and Council were Council, with Lucile Council, who commissioned by notable local archiwould become her life partner. tects, including Roland Coate, Wallace Well-traveled, Yoch was enamored Neff and Gordon Kaufmann, whose of medieval gardens, classic European own Bel Air garden was described as landscapes and ancient Roman archi“something you might find on the hills of tecture. She challenged herself to southern Spain.” An early preservationre-create historic gardens using native ist and proponent of native landscaping, California plants. “The geometry she Yoch was also sensitive to the needs of used was unpredictable and theatrical, the gardener; after completing a project, but the plants were all familiar,” says she would compile a detailed owner’s James Yoch, a cousin of Florence and manual. According to James Yoch, her the author of Landscaping the American Built in 1922 for a lumber heiress, the Montecito Dream: The Gardens and Film Sets of garden that Yoch called “Il Brolino” shows how she plant lists continue to inspire. “I still get letters from young landscape archiFlorence Yoch, 1890-1972 (Sagapress, softened European design with rounded edges. tects looking for those lists.” 1989). “While walking in one of her The grand garden has been mostly preserved.

orn in Greece in 1904 to a Sephardic Jewish family, an Eichler in Palo Alto, the first mass-produced steel house. Raphael Soriano experienced first-hand the rise of fas- Stylish, affordable and designed for easy production, Soriano’s cism before emigrating to the U.S. at age 20. In America, work was inspired by the auto-assembly line. He wanted his houses to be as popular and accessible to the American family he became a staunch supporter of democratic ideas in his politics and in his designs. He received a degree in architec- as a Ford, although he never achieved the same success as many who followed in his footsteps. ture from USC and interned with Richard Neutra and Rudolph With their low profiles, large windows and naturalistic Schindler. Soriano experimented with affordable, commercial landscaping, Soriano’s designs fit right steel and aluminum framing for resiin with contemporary ideas of melding dential projects, and finished his first architecture and its environment. “When house in 1936. The completion of the you’re in a Soriano house, you can enjoy Lipetz House in Los Angeles preceded being a part of the landscape,” says Neil better-known steel-framed houses, such Jackson, author of The Modern Steel House as Donald Wexler’s first Palm Springs (John Wiley &amp; Sons, 1996), which profiles home, by more than 20 years. Soriano and others who have embraced Soriano’s career took off after he steel as their building material of choice. designed the 1950 Case Study House. Today, architecture buffs mourn It featured a prefabricated steel frame the fact that only 12 Soriano homes that could be quickly assembled and remain standing. One notable example movable walls that allowed for a flexible Soriano’s simple, metal-framed homes is the home of Soriano’s close friend, the layout. Until his passing in 1988, Soriano Raphael embraced the technology of the day while late photographer Julius Shulman, who completed more than 50 aluminum- or honoring the natural world with their strong enjoyed the versatility and openness of steel-framed structures throughout connection to the outdoors, as seen in the his home until his recent passing. the West Coast and Hawaii, including 1959 Leaver House in Belvedere.

I completed a three month internship at California Home + Design magazine, and did freelance work after. Here are printed examples of articles I worked on. 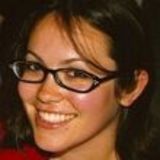