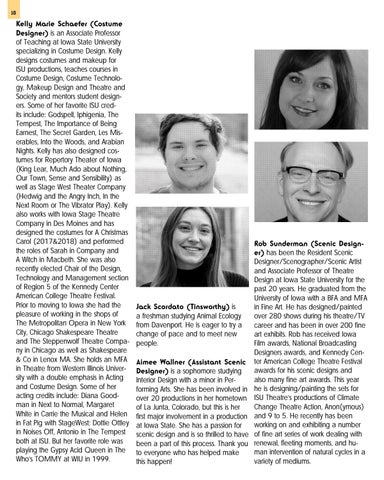 Kelly Marie Schaefer (Costume Designer) is an Associate Professor of Teaching at Iowa State University specializing in Costume Design. Kelly designs costumes and makeup for ISU productions, teaches courses in Costume Design, Costume Technology, Makeup Design and Theatre and Society and mentors student designers. Some of her favorite ISU credits include: Godspell, Iphigenia, The Tempest, The Importance of Being Earnest, The Secret Garden, Les Miserables, Into the Woods, and Arabian Nights. Kelly has also designed costumes for Repertory Theater of Iowa (King Lear, Much Ado about Nothing, Our Town, Sense and Sensibility) as well as Stage West Theater Company (Hedwig and the Angry Inch, In the Next Room or The Vibrator Play). Kelly also works with Iowa Stage Theatre Company in Des Moines and has designed the costumes for A Christmas Carol (2017&amp;2018) and performed the roles of Sarah in Company and A Witch in Macbeth. She was also recently elected Chair of the Design, Technology and Management section of Region 5 of the Kennedy Center American College Theatre Festival. Prior to moving to Iowa she had the pleasure of working in the shops of The Metropolitan Opera in New York City, Chicago Shakespeare Theatre and The Steppenwolf Theatre Company in Chicago as well as Shakespeare &amp; Co in Lenox MA. She holds an MFA in Theatre from Western Illinois University with a double emphasis in Acting and Costume Design. Some of her acting credits include: Diana Goodman in Next to Normal, Margaret White in Carrie the Musical and Helen in Fat Pig with StageWest; Dottie Ottley in Noises Off, Antonio in The Tempest both at ISU. But her favorite role was playing the Gypsy Acid Queen in The Whoâ&amp;#x20AC;&amp;#x2122;s TOMMY at WIU in 1999.

Jack Scordato (Tinsworthy) is a freshman studying Animal Ecology from Davenport. He is eager to try a change of pace and to meet new people. Aimee Wallner (Assistant Scenic Designer) is a sophomore studying Interior Design with a minor in Performing Arts. She has been involved in over 20 productions in her hometown of La Junta, Colorado, but this is her first major involvement in a production at Iowa State. She has a passion for scenic design and is so thrilled to have been a part of this process. Thank you to everyone who has helped make this happen!

Rob Sunderman (Scenic Designer) has been the Resident Scenic Designer/Scenographer/Scenic Artist and Associate Professor of Theatre Design at Iowa State University for the past 20 years. He graduated from the University of Iowa with a BFA and MFA in Fine Art. He has designed/painted over 280 shows during his theatre/TV career and has been in over 200 fine art exhibits. Rob has received Iowa Film awards, National Broadcasting Designers awards, and Kennedy Center American College Theatre Festival awards for his scenic designs and also many fine art awards. This year he is designing/painting the sets for ISU Theatreâ&amp;#x20AC;&amp;#x2122;s productions of Climate Change Theatre Action, Anon(ymous) and 9 to 5. He recently has been working on and exhibiting a number of fine art series of work dealing with renewal, fleeting moments, and human intervention of natural cycles in a variety of mediums.

This imagined performance was inspired by a similar archival project for a canceled performance of Diana Burbano’s Policarpa at Franklin & Marshall College. Imagined Performance: 9 to 5 is serving as a “shelter” for our collective memory of this unprecedented process of making and unmaking 9 to 5. Our company has collected any analog and digital remnants related to the production created prior to, or in response to the interruption of the COVID-19 pandemic. This publication is a testament to the labor and love that our production team, our designers and assistants, our performers, our musicians—our one and only company—put into this production of 9 to 5. This is our Imagined Performance, for you, our very real audience. We invite you to look around—put on some classic Dolly, if you’d like— and celebrate our work with us as our show finally finds its home. 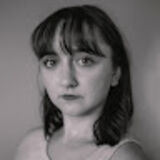