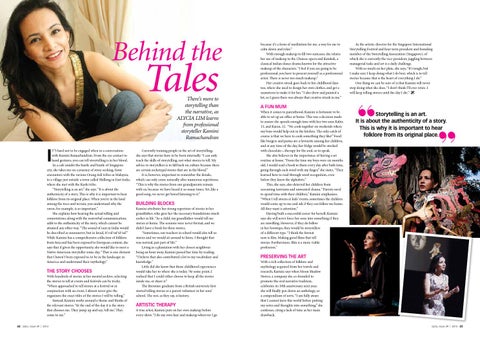 because it’s a form of meditation for me, a way for me to calm down and relax.” With enough makeup to fill two suitcases, she relates her use of makeup to the Chinese opera and Katakali, a classical Indian dance drama known for the attractive makeup of the characters. “I feel if you are going to be professional, you have to present yourself as a professional artist. There is never too much makeup.” Her creative streak goes back to her childhood days too, where she used to design her own clothes, and get a seamstress to make it for her. “I also drew and painted a lot, so I guess there was always that creative streak in me.”

There’s more to storytelling than the narrative, as ALYCIA LIM learns from professional storyteller Kamini Ramachandran

The Story Chooses With hundreds of stories in her mental archive, selecting the stories to tell at events and festivals can be tricky. “When approached to tell stories at a festival or in conjunction with an event, I almost never give the organisers the exact titles of the stories I will be telling.” Instead, Kamini works around a theme and thinks of the relevant stories. “At the end of the day it is the story that chooses me. They jump up and say, ‘tell me’. They come to me.” 44 Quill Issue 39 | 2013

A Fun Mum When it comes to parenthood, Kamini is fortunate to be able to set up an office at home. This was a decision made to ensure she spends enough time with her two sons Kabir, 13, and Karan, 12. “We cook together on weekends where my boys would help out in the kitchen. The only catch of course is that we have to cook something they like!” Food like burgers and pastas are a favourite among her children, and at any time of the day, her fridge would be stocked with chocolate—therapy for the soul, so to speak. She also believes in the importance of having a set routine at home. “From the time my boys were six months old, I would read a book to them every day after bath time, going through each word with my finger,” she states. “They learned how to read through word recognition, even before they knew the alphabets.” This, she says, also deterred her children from screaming tantrums and unwanted drama. “Parents need to spend time with their children,” Kamini emphasises. “When I tell stories at kids’ events, sometimes the children would come up to me and ask if they can follow me home. All they want is attention.” Having built a successful career for herself, Kamini says she will never force her sons into something if they are unwilling. However, if they do follow in her footsteps, they would be storytellers of a different type. “I think the format now is film. Making good films that tell stories. Furthermore, film is a more viable profession.”

Currently training people in the art of storytelling, she says that stories have to be born internally. “I can only teach the skills of storytelling, not what stories to tell. My advice to storytellers is to fall back on culture because there are certain archetypal stories that are in the blood.” It is, however, important to remember the details, which can only come naturally after numerous repetitions. “This is why the stories from our grandparents remain with us, because we have heard it so many times. Yet, like a good song, we never get bored listening to it.”

Building blocks Kamini attributes her strong repertoire of stories to her grandfather, who gave her the necessary foundations much earlier in life. “As a child, my grandfather would tell me stories at home. The sessions were never formal, and we didn’t have a book for these stories. “Sometimes, our teachers in school would also tell us stories and we would sit around to listen. I thought that was normal, just part of life.” Living in a plantation with her closest neighbour being an hour away, Kamini passed her time by reading. “I believe that also contributed a lot to my vocabulary and knowledge.” Little did she know that those childhood experiences would take her to where she is today. “At some point, I realised that I could either choose to keep all the stories inside me, or share it.” The literature graduate from a British university first started telling stories as a parent volunteer in her sons’ school. The rest, as they say, is history.

Artistic Therapy A true artist, Kamini puts on her own makeup before every show. “I do my own hair and makeup wherever I go

Storytelling is an art. It is about the authenticity of a story. This is why it is important to hear folklore from its original place.

T’S hard not to be engaged when in a conversation with Kamini Ramachandran. From the eye contact to hand gestures, you can tell storytelling is in her blood. In a café amidst the hustle and bustle of Singapore city, she takes me on a journey of story-seeking, from encounters with the various Orang Asli tribes in Malaysia, to a village just outside a town called Shillong in East India, where she met with the Kashi tribe. “Storytelling is an art,” she says. “It is about the authenticity of a story. This is why it is important to hear folklore from its original place. When you’re in the land among the trees and terrain, you understand why the raven, for example, is so important.” She explains how hearing the actual telling and connotations, along with the nonverbal communication, adds to the authenticity of the story, which cannot be attained any other way. “The sound of rain in India would be described as suuuuurrrr, but in Israel, it’s tif taf tif taf.” While Kamini has a comprehensive collection of folklore from Asia and has been exposed to European content, she says that if given the opportunity, she would like to meet a Native American storyteller some day. “That is one element that I haven’t been exposed to, to be in the landscape in America and understand their mythology.”

As the artistic director for the Singapore International Storytelling Festival and four-term president and founding member of the Storytelling Association (Singapore), of which she is currently the vice-president, juggling between managerial tasks and art is a daily challenge. With so much on her plate, she says, “It’s tough, but I make sure I keep doing what I do best, which is to tell stories because that is the heart of everything I do.” One thing we can be sure of is that Kamini will never stop doing what she does. “I don’t think I’ll ever retire. I will keep telling stories until the day I die.”

With a rich collection of folklore and mythology acquired from her travels and research, Kamini says when Moon Shadow Stories, a company she co-founded to promote the oral narrative tradition, celebrates its 10th anniversary next year, she will finally pen down an anthology, or a compendium of sorts. “I am fully aware that I cannot leave this world before putting my notes and thoughts into something,” she confesses, citing a lack of time as her main drawback. Quill Issue 39 | 2013 45