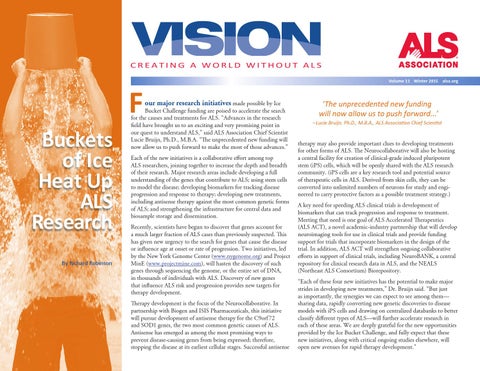 CREATING A WORLD WITHOUT ALS

Buckets of Ice Heat Up ALS Research By Richard Robinson

our major research initiatives made possible by Ice Bucket Challenge funding are poised to accelerate the search for the causes and treatments for ALS. “Advances in the research field have brought us to an exciting and very promising point in our quest to understand ALS,” said ALS Association Chief Scientist Lucie Bruijn, Ph.D., M.B.A. “The unprecedented new funding will now allow us to push forward to make the most of those advances.”

Each of the new initiatives is a collaborative effort among top ALS researchers, joining together to increase the depth and breadth of their research. Major research areas include developing a full understanding of the genes that contribute to ALS; using stem cells to model the disease; developing biomarkers for tracking disease progression and response to therapy; developing new treatments, including antisense therapy against the most common genetic forms of ALS; and strengthening the infrastructure for central data and biosample storage and dissemination. Recently, scientists have begun to discover that genes account for a much larger fraction of ALS cases than previously suspected. This has given new urgency to the search for genes that cause the disease or influence age at onset or rate of progression. Two initiatives, led by the New York Genome Center (www.nygenome.org) and Project MinE (www.projectmine.com), will hasten the discovery of such genes through sequencing the genome, or the entire set of DNA, in thousands of individuals with ALS. Discovery of new genes that influence ALS risk and progression provides new targets for therapy development. Therapy development is the focus of the Neurocollaborative. In partnership with Biogen and ISIS Pharmaceuticals, this initiative will pursue development of antisense therapy for the C9orf 72 and SOD1 genes, the two most common genetic causes of ALS. Antisense has emerged as among the most promising ways to prevent disease-causing genes from being expressed; therefore, stopping the disease at its earliest cellular stages. Successful antisense

therapy may also provide important clues to developing treatments for other forms of ALS. The Neurocollaborative will also be hosting a central facility for creation of clinical-grade induced pluripotent stem (iPS) cells, which will be openly shared with the ALS research community. (iPS cells are a key research tool and potential source of therapeutic cells in ALS. Derived from skin cells, they can be converted into unlimited numbers of neurons for study and engineered to carry protective factors as a possible treatment strategy.) A key need for speeding ALS clinical trials is development of biomarkers that can track progression and response to treatment. Meeting that need is one goal of ALS Accelerated Therapeutics (ALS ACT), a novel academic-industry partnership that will develop neuroimaging tools for use in clinical trials and provide funding support for trials that incorporate biomarkers in the design of the trial. In addition, ALS ACT will strengthen ongoing collaborative efforts in support of clinical trials, including NeuroBANK, a central repository for clinical research data in ALS, and the NEALS (Northeast ALS Consortium) Biorepository. “Each of these four new initiatives has the potential to make major strides in developing new treatments,” Dr. Bruijn said. “But just as importantly, the synergies we can expect to see among them— sharing data, rapidly converting new genetic discoveries to disease models with iPS cells and drawing on centralized databanks to better classify different types of ALS—will further accelerate research in each of these areas. We are deeply grateful for the new opportunities provided by the Ice Bucket Challenge, and fully expect that these new initiatives, along with critical ongoing studies elsewhere, will open new avenues for rapid therapy development.”