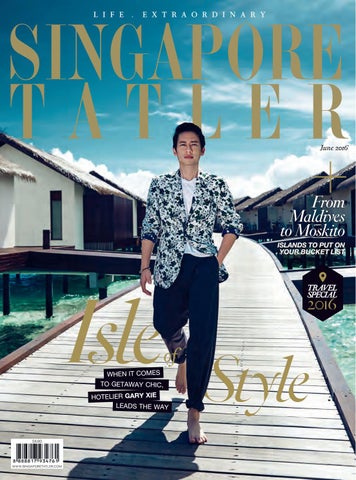 From Maldives to Moskito ISLANDS TO PUT ON YOUR BUCKET LIST

WHEN IT COMES TO GETAWAY CHIC,

RUNWAY SUCCESS The Residence Maldives, with its 94 villas and endless expanse of turquoise sea, is a rapturous setting for an impromptu fashion show. More on p.164

Ready for summer? Perfect, because we’ve mapped out spectacular isles around the world, all divine destinations and simmering hot spots, to add to your bucket list

WALKING ON THE WILD SIDE

SAIL OF THE CENTURY

Dream destinations to sail to, according to those in the know

From Caribbean idylls to Oceania utopias

A sense of tranquillity and casual luxe permeates The Residence Maldives

Velaa Private Island, a regal refuge in the Indian Ocean

ISLES For a true escape, what better getaways are there than islands? Just consider the facts: they are separated from the rest of the world by water, and offer a delicious combination of experiences both on land and at sea. Here we unveil 10 ravishing isles, each with their own unique appeal, not to be missed

ROCK ON No retouching here. The vibrant hues on the meekly named Remarkable Rocks are courtesy of Mother Nature—fiery orange lichen covers the black mica, blue quartz and pink feldspar boulders shaped by the elements into dramatic forms

SUN, SEA, SAND, SOLITUDE The Philippines has more than 7,000 islands spread across the western Pacific Ocean, but this one is super private. Membership at Balesin Island Club starts at US$60,000

Few things connote exclusivity quite like a “membersonly private island club”, and that’s exactly what Balesin Island Club is. The 500ha isle, a 20min flight from Manila, opened in 2011 off the eastern coast of Luzon in the Philippines and features seven self-contained resort villages each designed after glittering beach sanctuaries like Mykonos, Phuket and St-Tropez. Its 314 suites and villas are handsomely appointed, while restaurants mine fresh produce from the island’s fruit and vegetable farms. Members enjoy a feast of activities to keep them busy, including a destination spa (one of the few in Asia to offer thalassotherapy), a sports centre with indoor tennis courts, a climbing wall and gym, water sports, horseback riding, paintball, archery and 5km of walking trails in the forested interior (only 10 per cent of the island is developed). Perhaps more tempting are the immaculate ribbons of sugary sand, the crystal clear sea, and the covetable option of doing absolutely nothing, in style.

Numbers hint at the expansive nature visitors can anticipate on Kangaroo Island, a 30min flight southwest of Adelaide. It’s more than six times the size of Singapore, has about 4,500 human inhabitants, and a marsupial population of 60,000. Also home to a teeming colony of Australian sea lions and pods of dolphins on the north coast, the island is, in essence, one jumbo, fence-free zoo. As captivating as the animal life are, the appropriately named Remarkable Rocks, mammoth granite boulders pounded by 500 million years of rain, wind, and waves to become contorted, colourful, otherworldly spectacles. At Little Sahara, an area of giant inland dunes, adventurers can try sandboarding. Check in to Southern Ocean Lodge, one of Australia’s earliest luxury accommodations, set on a cliff above a rugged stretch of coast. If all the freeroaming wildlife and salubrious fresh air feels too wholesome, go for a tasting at Kangaroo Island Spirits, a boutique distillery with gin, vodka and liqueurs produced on the island.

Masterminded by Walker Corporation, Australia’s largest private diversified property developer, this swank, all-inclusive island resort, a 45min seaplane flight from Nadi International Airport, will open in the last quarter of this year. Need to whet your appetite now? Expect long stretches of white sandy beach; phenomenal snorkelling and diving, and the chance to swim with manta rays at the Great Astrolabe Reef, a 10min boat ride away; renowned guest chefs visiting throughout the year; a spa, cultural village, minigolf, walking trails, restaurants, kids’ club, and a classic beach shack bar. Want more? Each of the 21 walled villas, crafted like a traditional Fijian bure (open-planned with exposed timber pole beams), comes with a private pool, garden, and deck that leads onto a placid lagoon. If you want an island where you can decompress and then recharge, you’ve found it.

WATER GATE The roof of the Azure Window is about 30m above sea level. Popular with scuba divers, the geological wonder also attracts intrepid cliff divers who don’t mind flouting the law

Russia’s version of the Galápagos Islands is far out—literally, 140km off the northeast coast of Siberia. Untouched by glaciers during the last Ice Age, and believed to be the last home of the woolly mammoth (tusks and bones are regularly found on the island), Wrangel is mostly a nature reserve created in 1976 by the Soviet Central Government to safeguard the colonies of snow geese, polar bears and walruses. It’s now also a Unesco World Heritage Site. Only official personnel and invited guests can visit the island, so travellers typically arrive on a tour. Heritage Expeditions has been running trips to Wrangel Island for the last nine years, the most adventurous option an overland, three-day island crossing in a six-wheel tundra vehicle (the itinerary is aptly named Across the Top of the World). Accommodations are basic—wooden ranger huts with bunk beds—but the opportunity to witness the highest density of polar bears in the world in a pristine Arctic tundra environment is absolutely worth the hardship.

IN HOT WATER? Any sensible evening ritual at Belle Mont Farm, St Kitts, should include a leisurely soak in the cottage’s delightfully rustic outdoor bathroom

Until Game of Thrones was filmed here, this archipelago in the central Mediterranean that’s steeped in millennia of history was relatively unknown outside Europe. Its location— between Italy, Tunisia and Libya— made it a strategically desirable naval base, prompting powers, including the Phoenicians, Romans, Moors, Normans, Spanish and French, to impose their rule. Having finally gained independence from the British in 1964, Malta today is a beguiling melange of indented coastlines and graceful historical buildings—an open-air museum of sorts. The walled city of Valletta (awarded the European Capital of Culture 2018) is just 0.8sqkm, about the size of the Singapore Botanic Gardens, making it the smallest capital in the European Union. Here you’ll find the stunning, baroque St John Co-Cathedral, constructed in the 1500s by the Knights of Malta, and Casa Ellul, a former palazzo turned elegant hotel. A few kilometres to the south, the Hal Saflieni Hypogeum is the only underground prehistoric temple in the world. No trip here should miss the Blue Hole dive site and the nearby Azure Window, an iconic rock arch that’s worth photographing over and over again.

BEAR NECESSITIES “I know. It’s cold. For you, ha! I have two layers of fur and an additional layer of fat that help me stay warm when I’m hunting seals, even when it’s -40°C below…”

The mother colony of the West Indies and the first Caribbean island to be colonised by the British, St Kitts coupled with neighbouring Nevis make the smallest independent nation in the western hemisphere. Since St Kitts is a relative newcomer to tourism (until 2005 sugar was the mainstay of the economy), it has been careful to plan developments that keep the island unspoiled. The landscape showcases ruins of former sugar plantations, including mills, chimneys and manor homes. For some raw fun, visit during the riotous annual carnival Sugar Mas. A couple of properties stand out. The 18-month-old Belle Mont Farm, an 84-cottage hotel designed by world-renowned architect Bill Bensley, is part of an organic farming community, so count on exquisite farmto-table cuisine. The 126-room Park Hyatt St Kitts will open late this year on a secluded beachfront overlooking The Narrows, the strait separating St Kitts and Nevis. Here’s one Caribbean isle that nobody you know has visited, so come for the bragging rights but stay for its manifold charms.

Time travel is real. Exhibit A: Cuba, the Caribbean’s largest, most culturally unique island. It sits just 140km south of the US, but due to a long-standing embargo, is stuck in the late 1950s, with vintage American cars prowling the streets and society untainted by the global technology boom. The island promises inspiring, diverse scenery—from seductive beaches to rugged mountain systems, to Havana’s mesmerising dilapidated buildings—in addition to Cuba’s intense, multilayered culture and music. Lodge at the island’s most storied pad, the 86-year-old Hotel Nacional de Cuba in Havana, with architecture that melds art deco, Arabic and Spanish-Moorish. Hurry though. Following the recent restoration of diplomatic relations with the US, the country will soon change and modernise.

TUNING IN There’s no resisting the infectious, pulsating, hip-gyrating rhythms of Cuba’s various musical genres like son, charanga, guajira and rumba—even if you’re tone-deaf and have two left feet

FRESH OFF THE BOAT A typical scene at Negombo, a coastal town north of Colombo with gorgeous stretches of golden sand

Divers have long extolled Palau’s pristine marine ecology, but when Jacques Cousteau named the Ngemelis Wall the world’s best wall dive, the reputation of this underwater wonder was sealed. This nation of more than 200 islands (and only 21,000 people!) located 1,000km due east of the Philippines is an aquatic utopia, aided by a government that champions protection of the fragile environment. About three-quarters of the country are covered in native forests and mangroves, while 80 per cent of the waters are a national marine sanctuary. The oceans surrounding the islands have 550 species of corals, gorgonians and sea pens, 1,450 species of reef fish, and 60 sunken ships and aircraft that recall the battles fought here during World War II. Visit the Unesco World Heritage Site Rock Islands (especially the one with a jellyfish lake), hilly, limestone, forested slashes of deep jade in hypnotic turquoise seas. Stay at Pacific Palau Resort, set in 64 acres of lush grounds, with a pristine beach, sumptuous overwater bungalows, and a professional dive centre.

Require an intimately private, beautifully furnished, almost sickeningly scenic place to hole away with 21 of your closest family or friends? Consider Moskito Island, the second Caribbean outpost of Richard Branson’s Virgin Limited Edition brand. Inspired by Branson’s first private island hideaway Necker Island, a few kilometres to the northeast, Moskito is the home away from home to fantasise about. It opened to guests for the first time earlier this year with the simple set-up of a recreation area and the three-villa Branson Estate with 11 bedrooms (privacy is a given, since the island can only be booked by one group at a time). In addition to silky sandy beaches, three infinity pools, floodlit tennis courts, and plenty of watersports, the royal refuge offers other titbits to sate even the most well travelled, cynically jaded jet-setter—full-moon sailing trips, romantic beachside dinners, build-yourown-pizza sessions for children, aerial performers, a DJ and movie nights with outdoor projectors.

RHAPSODY IN BLUE The incredible underwater visibility has attracted divers to Palau for decades. Now it’s your turn to see what all the fuss is about

With its 26-year civil war now fading into memory, Sri Lanka has become the hot destination of the day, an island offering fine beaches, tea plantations, waterfalls, wildlife safaris, and plenty of festivities that celebrate a culture dating back 5,000 years. A rash of recent luxury hotel openings like Anantara Peace Heaven Tangalle Resort, Ani Villas, Chena Huts, and the Shangri-La’s Hambantota Resort & Spa provide evidence of tourism’s gold-rush moment. Wellness, something Sri Lanka has a rich history in (it’s even mentioned in the Hindu epic the Ramayana), is the fastest-growing tourism segment, with two brand-new hotels focusing on it. Tri, opened in December last year above Lake Koggala, has 11 sustainably built hillside suites and a wellness menu that includes yoga and customised nutrition. Santani, to open next month in the woods above Kandy, has stilted buildings to minimise the impact on the ground, and will offer lifestyle coaching and programmes like music therapy and post-baby bliss.

HELLO, HOLIDAY Life on Moskito Island is filled with torturous choices. Lounge by the pool and order some food or take a dip in the warm, calm Caribbean Sea?