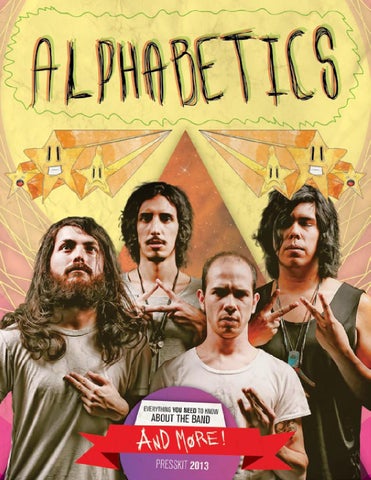 ALPHABETICS is an Indie dance-punk/rock band from San Jose, Costa Rica. The style of music that has been created is influenced by many different trends, making it tough to place them in one specific musical genre. Several artists have played a part in the musical inspiration of this band, modern names such as Foals, Does it Offend you Yeah, Phoenix, Arctic Monkeys, Minus the bear, etc., and blending it all together with a powerful execution and sparks of punk / rock music like The Mars Volta, Thrice or Foo Fighters, always keeping the dancey beats. The result is an awesome musical mix that gets a crowd moving as they feed off the incredible energy of the band.

This compilation of talent has captured the attention of many fans, not to mention media, in a very short space of time. The band was namedÂ best debuting band in 2011Â byÂ 89decibeles.com. This was decided and published based on live performances only, since the band had not released any kind of formal audio to the audience at the time, but had displayed great energy and lots of followers at each of their shows, making their audience anxious to finally get an album or record of some kind to listen to on their own.

On March 8th, 2012 the wait came to an end as they finally released their debuting 5 track EP by the name of “Self-destructive”, as well as their Video Clip for “Frutista” which becomes the first piece of audio and visual material to share on radio stations, television, online video channels and social media networks. The response has been gratifying in countless ways, meeting and surpassing expectations. On the last week of May 2012, “Frutista” reached #1 on the Hit Parade from 104.7 FM in Costa Rica, that is #1 within a top 10 countdown that included names like Ting Tings, Black Keys and Coldplay to name a few. This same debuting video just started to air on MTV Latin America as well as MTV Hits in August 2012, hoping to reach as much new viewers and fans as possible. Playing one show after another and having just released an EP and Video, Alphabetics was in a great spot, demonstrating a fast and impacting growth in the local music scene. Just when things seemed like they couldn’t get any better they did. In that same month of March they got chosen by the public as openers for the biggest Music Festival in Central America, and one of the top Festivals in Latin America overall, the 3rd edition of “Festival Imperial”. With less than a year of playing live, the band takes the opportunity to perform the same event as other world class artists such as Bjork, Maroon 5, Skrillex, TV on the Radio, Flamings Lips, Major Lazer, Moby and more, one of the highest achievements for this young new band so far. Concluding this festival the band has returned to playing shows all over the country, filming videos, interviews, photo shoots and lots of rehearsing, to be prepared for a long and active schedule. The year finished with a count of 30 live shows and a few popular mentions to summarize the accomplishments within Costa Rica’s music scene for 2012. Named “Video of the Year” and “3rd most popular album 2012” by La Nacion (Costa Rica’s main newspaper and information source) as well as the EP of the year by “89 decibeles”. This put a little cherry on the top of what was Alphabetic’s sophomore year.

Initiating 2013 the band has a lot on its plate. Starting strong with live shows and Festivals in Costa Rica, not losing rhythm from the high activity during the previous year, confirmation came from CMF (Canadian Music Festival) that Alphabetics was selected to showcase in the city of Toronto, this being the band’s first opportunity to go overseas. Playing show after show in Costa Rica with Toronto as the band’s priority in March, suddenly another big time invite comes in. This Indie Dance Punk band was selected to play in Austin, Texas during the week of SXSW (South by Southwest) directly invited by Red Gorilla Fest, an unofficial showcase organization held on 6th street during the week of March 12-16 2013, this made the first opportunity for Alphabetics to hit North America a really good one, catching the eye and notice of Costa Rican media being proud of these achievements for the band. Currently launching the second official video clip to finalize what was a remarkable debut EP “SelfDestructive” and pre producing what is going to be the band’s first LP to be launched in a few months from now. This first full album promises to be what Alphabetics showed at a first glance and even more. A lot of energy to dance and jump around, a more acknowledged taste and sound obtained by the hardworking mindset and growth the band has gained through time.

/ Chosen by the audience as openers for Festival Imperial 2012 (Main Stage).

/ “Frutista” chosen as video of the year by local news paper La Nación.

/ Ranked #4 in the list of Top 15 best cover songs of 2011 (Undercover Martyn, Two door Cinema Club), by Dance to the radio blog . / Another Mistake (bistek) chosen as the official song for the TV show “Untitled” in Chanel 9 CR.

Keyboard Stand: Two (Any brand or kind) to hold one 65 keys keyboard and a 45 keys synthetizer.

Acoustic Drum set: One 4 piece drum set (1 snare, At least 3 for for small shows. At least 4-5 for 1 tom, 1 bass drum, 1 floor tom). Medium – Large Shows. One will always be needed Hardware: One snare drum stand, Three Crash right next to the drummer’s seat; the rest can be laid Cymbal stands (Straight or Arm, makes no difference), out at Stage/Band/Sound Equipment/Sound Tech One Hi Hat stand, One Cowbell bass drum mount / convenience. Or one extra cymbal stand of any kind.

MICROPHONES Vocal mics: 3 (One lead singer. Two Back up voices) At least 2 vocal mics for every show no matter if it is a small or large audience (No Exceptions).

At least 75WTTS each for small shows. Both must have a distortion effect. One of both (at least) must Full amplification of our whole backline (drums, amps, synths, etc) *ESSENTIAL* have a Delay effect. Bass Amp: One (Any brand or kind. Preferred brands: Gallien Krueger, Ampeg.) At least 100WTTS for small shows. At least 150 – 200 WTTS for Medium – Large Shows. We preffer the Amp or cabinet to NOT have a twitter in the speaker.

Keys &amp; Synths Speaker(s) Amp or Amp Cabinet: One (Any brand or kind.) At least 75WTTS for small shows. If needed our Synthesizers can plug directly to main speakers, mixer board, etc. along with vocal mics.

In the event of there being additional equipment available, please inform us as we could always like to add one or another musical element to our live performance. We will not give an immediate refusal if the Rider is not 100% compliant. We can always attempt to negotiate possibilities or options to suffice our performance needs.

STAGE Please note This is the recomended Stage Plot for Alphabetics. It should be checked with the previously provided Input List for a better understanding of our stage needs.

Everything is color coded to avoid confusion. The band is flexible with this stage plan to satisfy certain stage issues/needs.

DIRECT LINE BASS Needs an electrical output for the pedalboard

KEYBOARD Can go to an Amplifier or to a Direct Line