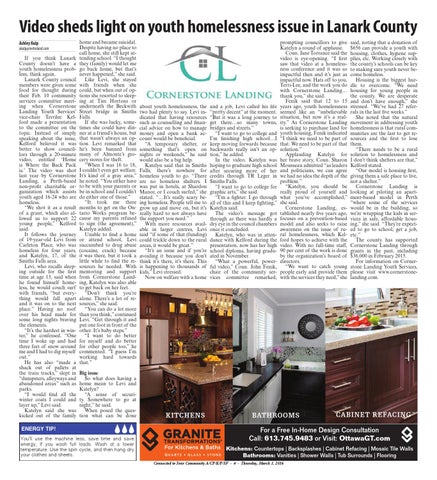 If you think Lanark County doesn’t have a youth homelessness problem, think again. Lanark County council members were given some food for thought during their Feb. 10 community services committee meeting when Cornerstone Landing Youth Services’ vice-chair Terrilee Kelford made a presentation to the committee on the topic. Instead of simply speaking about the issue, Kelford believed it was better to show councillors through a 20-minute video, entitled ‘Home is Where the Back Pack is.’ The video was shot last year by Cornerstone Landing, a Perth-based non-profit charitable organization which assists youth aged 16-24 who are homeless. “We shot it as a result of a grant, which also allowed us to support 22 young people,” Kelford said. It follows the journey of 19-year-old Levi from Carleton Place, who was homeless for four years, and Katelyn, 17, of the Smiths Falls area. Levi, who recalls sleeping outside for the first time at age 13, said when he found himself homeless, he would couch surf with friends, “but everything would fall apart and it was on to the next place.” Having no roof over his head made for some long nights braving the elements. “It’s the hardest in winter,” he confessed. “One time I woke up and had three feet of snow around me and I had to dig myself out.” He has also “made a shack out of pallets at the train tracks,” slept in “dumpsters, alleyways and abandoned areas” such as parks. “I would find all the winter coats I could and layer up,” Levi said. Katelyn said she was kicked out of the family

home and became suicidal. Despite having no place to call home, she still kept attending school. “I thought they (family) would let me go back home, but that’s never happened,” she said. Like Levi, she stayed with friends when she could, but when out of options she resorted to sleeping at Tim Hortons or underneath the Beckwith Street bridge in Smiths Falls. If she was lucky, sometimes she could have dinner at a friend’s house, but that wasn’t always an option. Levi remarked that he’s been banned from many of Almonte’s grocery stores for theft. “When I was 16 to 18, I couldn’t even get welfare. It’s kind of a gray area,” he noted. “You either have to be with your parents or be in school and I couldn’t do either one of those.” “It took me three months to get on the Ontario Works program because my parents refused to sign (the agreement),” Katelyn added. Unable to find a home or attend school, Levi succumbed to drug abuse (cocaine, crack) because it was there, but it took a little while to find the resources he needed. With mentoring and support from Cornerstone Landing, Katelyn was also able to get back on her feet. “Don’t think you’re alone. There’s a lot of resources,” she said. “You can do a lot more than you think,” continued Levi. “Get through it and put one foot in front of the other. It’s baby steps.” “I want to do better for myself and do better for other people too,” he commented. “I guess I’m working hard towards that.” Big issue So what does having a home mean to Levi and Katelyn? “A sense of security. Somewhere to go at night,” he said. When posed the question what can be done

about youth homelessness, the two had plenty to say. Levi indicated that having resources such as counselling and financial advice on how to manage money and open a bank account would be beneficial. “A temporary shelter, or something that’s open on nights or weekends,” he said would also be a big help. Katelyn said that in Smiths Falls, there’s nowhere for homeless youth to go. “There are no homeless shelters. I was put in hotels, at Shardon Manor, or I couch surfed,” she stated. “…It’s really scary being homeless. People tell me to grow up and move on, but it’s really hard to not always have the support you need.” With more resources available in larger centres, Levi said “if some of that (funding) could trickle down to the rural areas, it would be great.” “It’s an issue and if you’re avoiding it because you don’t think it’s there, it’s there. This is happening to thousands of kids,” Levi stressed. Now on welfare with a home

and a job, Levi called his life “pretty decent” at the moment. “But it was a long journey to get there…so many towns, bridges and streets.” “I want to go to college and I’m finishing high school…I keep moving forwards because backwards really isn’t an option,” he added. In the video, Katelyn was hoping to graduate high school after securing more of her credits through TR Leger in Smiths Falls. “I want to go to college for graphic arts,” she said. “I’m a fighter. I go through all of this and I keep fighting,” Katelyn said. The video’s message got through as there was hardly a dry eye in the council chambers once it concluded. Katelyn, who was in attendance with Kelford during the presentation, now has her high school diploma, having graduated in November. “What a powerful, powerful video,” Coun. John Fenik, chair of the community services committee remarked,

said, noting that a donation of $656 can provide a youth with housing, clothes, hygiene supplies, etc. Working closely with the county’s schools can be key to making sure youth never become homeless. Housing is the biggest hurdle to overcome. “We need housing for young people in the county. We are desperate and don’t have enough,” she stressed. “We’ve had 27 referrals in the last five weeks.” She noted that the natural movement in addressing youth homelessness is that rural communities are the last to get resources and the first to lose them. “There needs to be a rural solution to homelessness and I don’t think shelters are that,” Kelford stated. “Our model is housing first, giving them a safe place to live, not a shelter.” Cornerstone Landing is looking at piloting an apartment-based model in Perth “where some of the services would be in the building, so we’re wrapping the kids in services in safe, affordable housing,” she said. “They’re expected to go to school, get a job, etc.” The county has supported Cornerstone Landing through grants in the past, including $36,000 in February 2015. For information on Cornerstone Landing Youth Services, please visit www.cornerstonelanding.com.

ENERGY TIP! You’ll use the machine less, save time and save energy, if you wash full loads. Wash at a lower temperature. Use the spin cycle, and then hang dry your clothes and sheets.

prompting councillors to give Katelyn a round of applause. Coun. Jane Torrance said the video is eye-opening. “I first saw that video at a homelessness conference and it was so impactful then and it’s just as impactful now. Hats off to you, Terri-Lee, and the work you do with Cornerstone Landing… thank you,” she said. Fenik said that 12 to 15 years ago, youth homelessness seemed like an “unbelievable situation, but now it’s a reality.” As Cornerstone Landing is seeking to purchase land for youth housing, Fenik indicated “I think we need to be part of that. We need to be part of that solution.” Applauding Katelyn for her brave story, Coun. Sharon Mousseau admitted “as leaders and politicians, we can agree we had no idea the depth of the problem.” “Katelyn, you should be really proud of yourself and what you’ve accomplished,” she said. Cornerstone Landing, established nearly five years ago, focuses on a prevention-based model and also seeks to raise awareness on the issue of rural homelessness, which Kelford hopes to achieve with the video. With no full-time staff, 90 per cent of the work is done by the organization’s board of directors. “We want to catch young people early and provide them with the services they need,” she