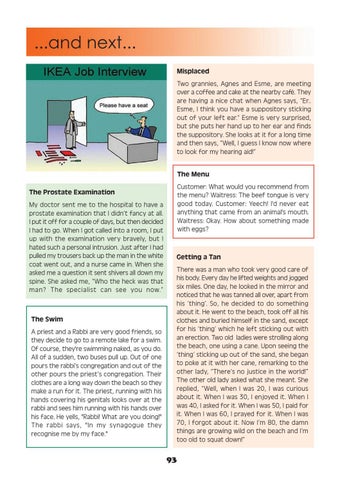 ...and next... Misplaced Two grannies, Agnes and Esme, are meeting over a coffee and cake at the nearby café. They are having a nice chat when Agnes says, “Er.. Esme, I think you have a suppository sticking out of your left ear.” Esme is very surprised, but she puts her hand up to her ear and finds the suppository. She looks at it for a long time and then says, “Well, I guess I know now where to look for my hearing aid!” The Menu Customer: What would you recommend from the menu? Waitress: The beef tongue is very good today. Customer: Yeech! I&#39;d never eat anything that came from an animal&#39;s mouth. Waitress: Okay. How about something made with eggs?

The Prostate Examination My doctor sent me to the hospital to have a prostate examination that I didn’t fancy at all. I put it off for a couple of days, but then decided I had to go. When I got called into a room, I put up with the examination very bravely, but I hated such a personal intrusion. Just after I had pulled my trousers back up the man in the white coat went out, and a nurse came in. When she asked me a question it sent shivers all down my spine. She asked me, “Who the heck was that man? The specialist can see you now.”

The Swim A priest and a Rabbi are very good friends, so they decide to go to a remote lake for a swim. Of course, they&#39;re swimming naked, as you do. All of a sudden, two buses pull up. Out of one pours the rabbi’s congregation and out of the other pours the priest’s congregation. Their clothes are a long way down the beach so they make a run for it. The priest, running with his hands covering his genitals looks over at the rabbi and sees him running with his hands over his face. He yells, &quot;Rabbi! What are you doing!&quot; The rabbi says, &quot;In my synagogue they recognise me by my face.&quot;

Getting a Tan There was a man who took very good care of his body. Every day he lifted weights and jogged six miles. One day, he looked in the mirror and noticed that he was tanned all over, apart from his ‘thing’. So, he decided to do something about it. He went to the beach, took off all his clothes and buried himself in the sand, except for his ‘thing’ which he left sticking out with an erection. Two old ladies were strolling along the beach, one using a cane. Upon seeing the ‘thing’ sticking up out of the sand, she began to poke at it with her cane, remarking to the other lady, “There’s no justice in the world!” The other old lady asked what she meant. She replied, “Well, when I was 20, I was curious about it. When I was 30, I enjoyed it. When I was 40, I asked for it. When I was 50, I paid for it. When I was 60, I prayed for it. When I was 70, I forgot about it. Now I’m 80, the damn things are growing wild on the beach and I’m too old to squat down!”